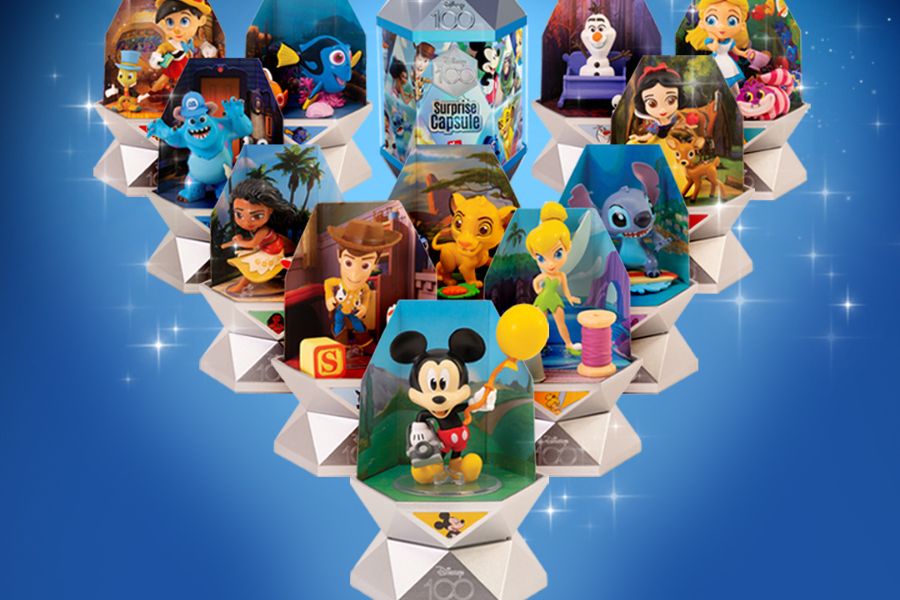 Packed with hidden surprises that will ‘wow’ Disney fans and families across the world, wanting to celebrate the landmark anniversary, the range commemorates Disney’s most iconic and loved characters from its 100-year legacy.  Retail demand for this product range is set to be high since the collection appeals to Disney fans of all ages.  The collection will be available across all European and Middle Eastern markets, plus Israel and South Africa.

YuMe Toys’ own, limited edition Surprise Capsules feature 24 iconic Disney 100 collectible characters, with a further four rare characters.   Intended as a two-phase launch to engage both adults and children across the celebratory year, the Surprise Capsules will be released with Series 1 in January, followed by Series 2 in July.

Characters in the collection, to name just a few, include everyone’s favourite lion-cub Simba, Alice in Wonderland, Pinocchio, Dory, Snow White, Dumbo, Ariel, Donald Duck, and Elsa.  The first rare characters to be released in January are Mickey Mouse and Tinkerbell, followed by Buzz Lightyear and Minnie Mouse in series two.

Every capsule is packed with multiple surprises, including YuMe’s signature magical reveal clue cards, which hint at which mystery character, a beautifully sculpted 2.5” collectible figure, lies hidden within each capsule. The consumer journey culminates in the nifty transformation of the capsule into a platinum-finish pedestal designed to be collected, played with, and cherished.

Ken Goodisson, Commercial Director, EMEA at YuMe Toys said: “To play a pivotal role in our industry, celebrating Disney’s once in a lifetime 100th anniversary milestone, is a real accolade for our award-winning surprise capsule ranges.   I think our product development team have done a fantastic job at encapsulating   Disney’s 100 years of Wonder through this limited collection that’s simply stunning to play with and display“.