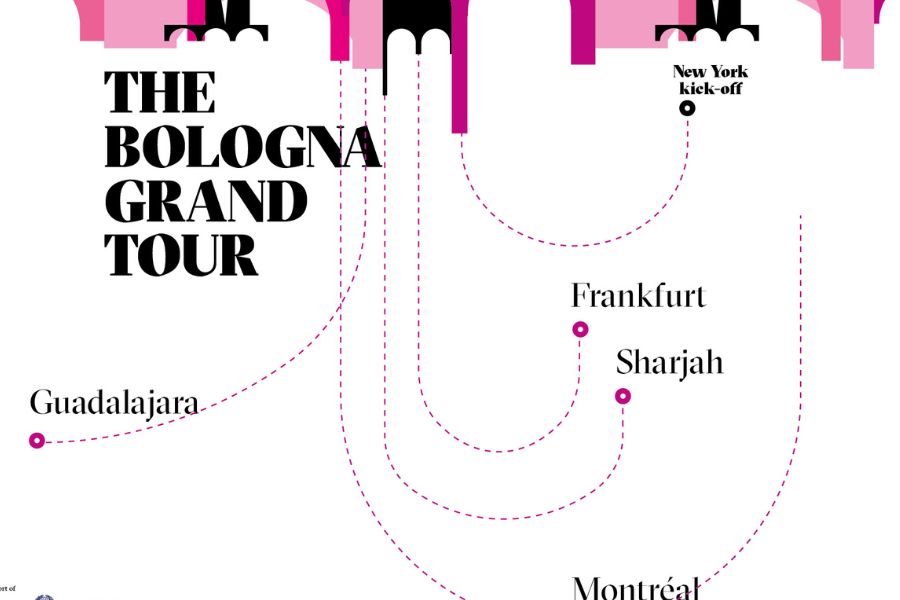 In anticipation of celebrating the 60th edition in 2023, Bologna Children’s Book Fair, together with BolognaBookPlus and Bologna Licensing Trade Fair/Kids are on tour, taking in major four book fairs in different parts of the world.

After the success of the first edition in 2021, The Bologna Grand Tour of premium publishing trade fairs is back. Developed in partnership with the Italian Trade Agency for the promotion of Italian companies abroad and the Ministry of Foreign Affairs and International Cooperation to strengthen the fair’s global reach and promote new international publishing opportunities, the 2022 Grand Tour is also an opportunity to launch the celebrations to mark the 60th edition of the Bologna Children’s Book Fair – scheduled from 6 – 9 March 2023 – to be held in conjunction with its brand extension – BolognaBookPlus – dedicated to general trade publishing and developed in partnership with the Italian Publishers’ Association (AIE), and Bologna Licensing Trade Fair/ Kids.

After the first stop at the Frankfurt Book Fair, the Grand Tour went to the Sharjah International Book Fair (SIBF) where Italy was the Guest Country of Honour. Next on the schedule is Canada and the Salon du Livre de Montréal, from 23 to 27 November. The last venue will be the Feria Internacional del Libro de Guadalajara (26 November – 4 December).

In Montreal, Bologna Children’s Book Fair (Booth 1325) will be laying on an exciting programme that includes three exhibitions showcasing examples of Italian excellence in both illustration and children’s publishing. Guided tours of exhibitions will be given by both the exhibition curators and invited Italian illustrators.

Also in Montreal, will be several of Italy’s iconic illustrators, like the great Lorenzo Mattotti. Other attractions include the Illustrator’s Survival Corner – one of the most sought-after spaces of every BCBF edition – together with another first for the Grand Tour: the well-known Illustrators Wall, a live painting space this time dedicated to Canadian illustrators at the show. Also scheduled is a special networking event on Wednesday 23 November at 7.00 p.m. at Espace PRO (level 5), after the official opening of the Salon.

BolognaBookPlus and Bologna Licensing Trade Fair/ Kids will also be in Montreal to present the new features and opportunities during the Bologna event in 2023.

As ever, the Bologna Grand Tour benefits from the collaboration of Laboratorio delle Idee.

Details of what’s on in Montreal:

This completely new exhibition presents a selection of comics published in recent years by twenty-five Italian publishers – ranging from independent micro-publishers to leaders in the Italian comic book sector, both famous names and fairly recent new entries. On show are single volumes, mini-series, magazines and serial productions. The wide assortment testifies to the narrative and artistic excellence of current comic book production by consolidated creatives but also by many writers and illustrators under forty, who have given an innovative thrust to Italian comic book narrative and illustration.

In fact, the exhibition includes ‘pure’ cartoonists, but also multifaceted authors comfortable in several different expressive languages. Illustrators Lorenzo Mattotti and Sarah Mazzetti will be in Montreal as special BCBF guests. Organised by Bologna Children’s Book Fair in partnership with the Comics & Graphic Novels Commission of Italian Publishers’ Association (AIE) and with the support of the Italian Trade Agency promoting Italian companies abroad, and the Ministry of Foreign Affairs and International Cooperation, the exhibition is a great opportunity for an international audience to discover – or re-discover – Italian comic book excellence. The show is curated by Marco Pellitteri, associate professor of Media and Communication at the School of Humanities and Social Sciences at Xi’an Jiaotong-Liverpool University.

Curated by Mimaster Illustrazione, the Exhibition presents a selection of comics for children and young adults by Sarah Mazzetti, an Italian illustrator and cartoonist whose delightfully satirical touch gently points up the many paradoxes of life. Sarah’s visual alphabet spans many different subjects and artistic media without ever losing its distinctive characteristics and colours, which in some instances, like Elsa’s Jewels, are no more than two. Whether an account on a single page like The Invention of the Pepper Mill, or a full-fledged book, Sarah’s comic books and stories take their cue from simple everyday happenings, or tap into widely shared childhood memories – like a love (or hate) of candied fruit – to generate a series of unexpected stories.

To mark the 10th anniversary of Mimaster, the International Master’s Degree in Illustration, asked all its former students as well as great illustrators like Noma Bar, Brad Holland, Katsumi Komagata, Libero Gozzini, William Grill, Federico Maggioni, Lorenzo Mattotti, Emiliano Ponzi, Peter Sìs, and Olimpia Zagnoli to search through their drawers and digital archives for a villain they had tackled in their careers as illustrators. The result is a marvellous gallery of ‘the villains’ who have accompanied the professional lives of longstanding illustrators or artists just starting out.

The Montréal exhibition comprises a selection of the most renowned villains – from our history books, movies or literature – chosen from the over 140 ‘villains’ sent in by the illustrators taking part in the project. Curated by Mimaster Illustration, the Exhibition was inaugurated at BCBF 2022 and continues its international tour at major book fairs and various exhibition venues in Italy and abroad.

One of the most popular initiatives at Bologna Children’s Book Fair, The Illustrators Survival Corner – curated by Mimaster Illustrazione in collaboration with BCBF – will also be in Montreal for the first time, with masterclasses, workshops, portfolio reviews and “Ask me anything” sessions dedicated to young professionals wishing to broaden their skills and understanding of the world of illustration. Italian artists Lorenzo Mattotti, Maria Sole Macchia, Sarah Mazzetti, Tiziana Romanin, Ivan Canu, and Giacomo Benelli will be on hand to give their views.

Participation in the Illustrators Survival Corner activities and guided tours is free of charge. All participants must, however, register and book an appointment or a place on a tour at this link.