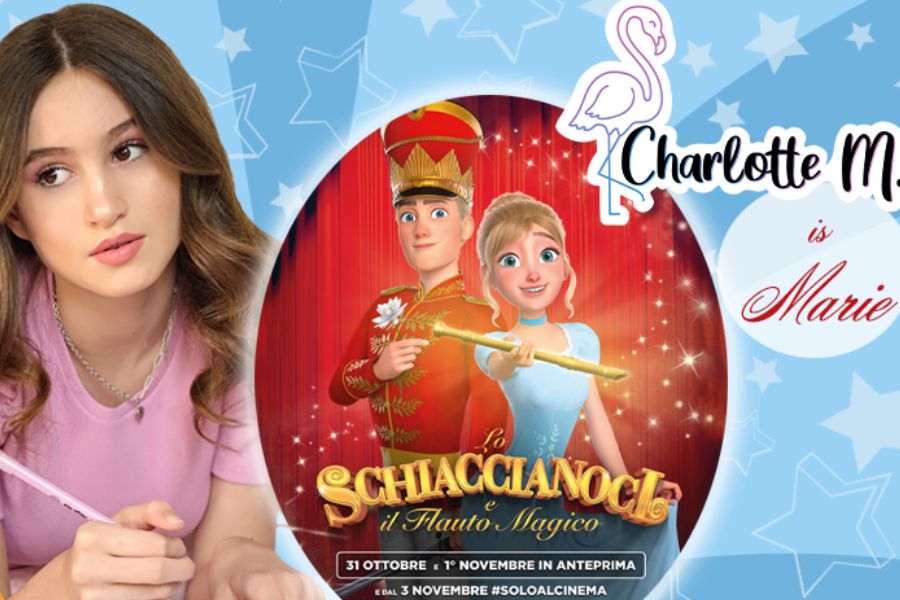 Charlotte M. has helped to propel the new animated film The Nutcracker and the Magic Flute.

Maurizio Distefano Licensing, worldwide licensing agent for Charlotte M., has announced that Charlotte is the voice of Marie, the heroine of the new animated film produced by Notorious Pictures. The Nutcracker and the Magic Flute has released in theatres on 3 November which, in its first weekend, has been a big hit in Italy.

Charlotte M.’s acting and singing talents are perfectly suited to the character of Marie, the young heroine, a girl who loves to dance and adores her toys. When her father dies, Marie makes a wish – and her toys come to life, while Marie becomes toy-sized and joins them in an incredible adventure full of fun, love and lots of magic.

Charlotte M. is thrilled with the success of the animated film and is keen to produce more magic for the silver screen. In fact she already has – but this time as the lead actress in a movie dedicated entirely to her.

Charlotte M. the Movie: Flamingo Party will launch on the big screen on 1 January 2023. It’s all about Charlotte and her friends in their first year at high school and how, in between school dances, love and music, they dedicate themselves to saving an oasis of flamingos. A novel adaptation of the film will also be released at the end of November; it will be published by Fabbri Editori.

Web star Charlotte M. boasts more than one million followers on YouTube and TikTok and is adored by her Generation Z fans. Her success is down to her authentic reflection of teenage life and its passions such as music, poetry, singing, acting and writing.

Her role in this animated film – and in the upcoming production dedicated her – confirms Charlotte M.’s still-growing popularity. It’s an amazing way to round off 2022, a year that has already boasted some major successes, like the release of Charlotte M.’s latest song Best Friend and the publication of her third book, My Secret Life, by Fabbri Editori.

She’s also a licensing star, with the help of Maurizio Distefano Licensing, which has brought her name to books, accessories, snacks, Easter eggs, back-to-school items and more.