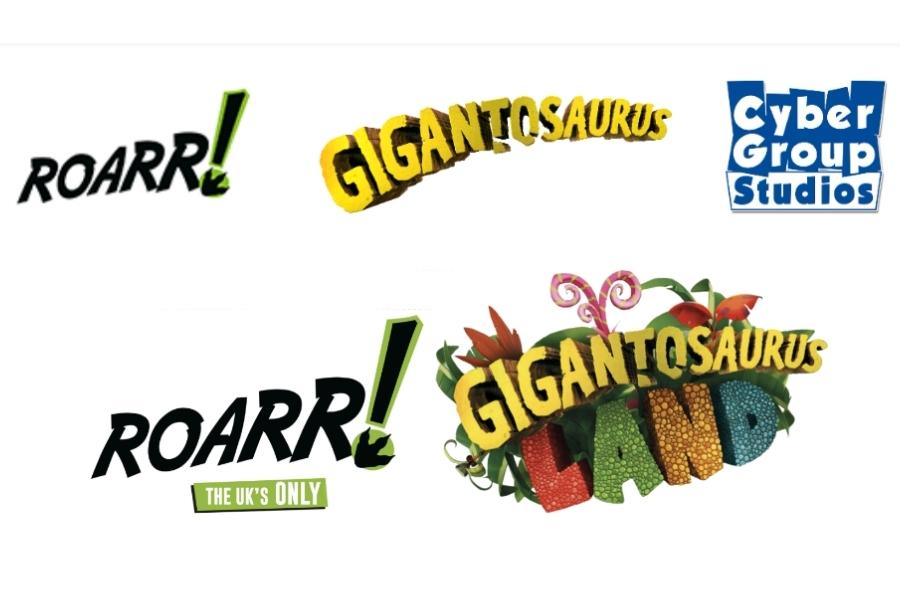 THE UK’S FIRST GIGANTOSAURUS LAND TO OPEN AT ROARR!

Based on the internationally renowned animated TV series, the UK’s first Gigantosaurus Land will be arriving in 2024 at the country’s number one dinosaur-themed adventure park.

ROARR! is set to embark on the biggest development in the Park’s history, after being granted full permission to create a new four-acre interactive play-themed area within the existing 85-acre Park.
Gigantosaurus Land is a collaborative new partnership between ROARR! and Cyber Group Studios , a leading producer and distributor of animated series for children and families worldwide. UK-based bRAND- WARD, the kids IP consultancy and licensing agency, brokered the new partnership.

The immersive attraction will be themed around Gigantosaurus, the successful animated series currently streaming worldwide on Disney+ and Netflix and airing on Tiny POP in the UK and internationally on major channels such as Disney Junior (worldwide), France Télévisions and RAI yoyo (Italy).
Produced by Cyber Group Studios, the series – now counting three seasons of 52-episodes x 11 minutes each – is based on Jonny Duddle’s book published by Bonnier Books UK Ltd, which has sold over 600,000 copies worldwide.
The development of ROARR!’s new Gigantosaurus Land will be completed in three phases – with the first phase including a vertical volcano themed drop ride, spinning flower teacups, water play, a jumping pillow, a towering wooden play ‘n’ climb den and much more…
Designed to encourage exploratory and sensory family play, there will also be several interactive concepts for families to discover together – some featuring well-loved characters from the show including Rocky, Bill, Mazu and Tiny.

A smaller play area will also be created with younger children in mind, where kids can marvel at a slide made from Gigantosaurus’s scales.
Visitors to Gigantosaurus Land will be greeted by a Cretaceous entranceway and can jump into humongous dinosaur footprints along the walkways.
There will be new Dino themed food and beverage outlets in the Den setting from the show, plus Gigantosaurus’s Dino-Store to explore so families can take home a memento from their prehistoric day.
Inspired by the visual and colourful designs featured within the TV programme and the stunning natural savannah setting – which is home to a host of prehistoric insects and creatures and set against the iconic backdrop of the fiery volcano – the new Land will be surrounded by a vibrant landscape of grassland, trees, and planting, with instantly recognisable flowers from Gigantosaurus.

Adam Goymour, park director at ROARR! said:
“This is a momentous time in ROARR!’s history and we are incredibly excited to begin the next stage of this significant project. “This has been a four-year project including two years of negotiations with Cyber Group Studios and nine months to obtain planning permission.
“To be working with Cyber Group Studios to bring to life the wonderful world of Gigantosaurus is a privilege and we can’t wait to see our guests’ reactions when they visit this immersive and beautiful new area.
“We’re hugely proud of the changes we have made to ROARR! over the years to establish it as the number one dinosaur-themed adventure Park in the UK, but the collaboration with Cyber Group Studios is going to elevate ROARR! even further – providing our guests from around the UK with so much to discover and enjoy during their family day out.
“We are also incredibly thankful to the award-winning team of consultants that have helped us on this journey so far, including theme park designers Katapult and Liz Lake Landscape architects.”

Bruno Danzel d’Aumont, VP International Licensing and Marketing at Cyber Group Studios, said: “We are thrilled and honoured to partner with ROARR! Dinosaur Adventure, one of the UK’s leading theme parks, to create Gigantosaurus Land. We can’t wait to see the Gigantosaurus series come to life and share the enjoyment, fun and adventure with park visitors.”

Work is due to begin in January 2023 with the first phase set to open to the public in 2024. The final two phases will see additional Gigantosaurus themed concepts introduced to the Park, elevating the family day out at ROARR!.
ROARR! ha s also partnered with a team of design and planning consultants for the expansion project,which include Adrian James Acoustics, Plandescil, Pegasus Group, WildWings Ecology, Chaplin Farrant and Cheffins.