Tags from the story: Smurfs.

The Smurfs, the well-known brand born from the little blue characters created by Peyo in 1958, never ceases to provide excitement worldwide.

IMPS has announced the latest news for the coming months.

In recent years the Smurfs have been booming in adults’ and young adults’ fashion, especially since 2020 and the unexpected collaboration with the famous trendsetter New York label, Supreme. On the occasion of BLE 2022, whose theme was fashion, the Smurfs Fashion Show was organized on September 20, with a catwalk that showcased the latest collections for kids and adults. Among the relevant collabs, names are Benetton, Billebeino, VILA, GAP, MC2 Saint Barth, Air Walk, Universal Music, Sangacio, EMP, C&A.

On November 24, Papa Smurf will once again take to the New York City skyline to help viewers Smurf up some holiday cheer at this year’s Macy’s Thanksgiving Day Parade.

Born Licensing, the unique licensing agency which specializes in licensing characters, clips, and entertainment IP solely for advertising, is representing The Smurfs license for advertising and marketing campaigns worldwide.

Concerning Digital, the new Smurf racing video game by Microids, Smurfs Kart, developed by Eden Games, will launch on Nintendo Switch in November 2022. It will include 12 tracks from the Smurfs’ universe and 12 iconic playable Smurfs. 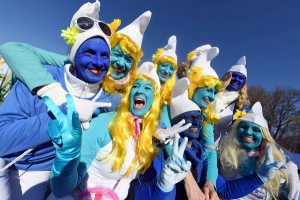 For the Experiential sector, IMPS and CluedUpp Games have announced a brand-new licensing agreement that will transform hundreds of cities into a giant Smurf-tastic experience in 2023.

Events are scheduled to take place in more than 800 cities and over 20 countries worldwide. Players will immerse themselves in a unique experience which combines augmented reality with the physical world. Tickets will go on sale to the public from October 2022.

As for Food & Promotion, starting from September 7, the Smurfs turn the Happy Meal boxes in the UK and Ireland for 6 weeks into magical mushroom houses in which your little one can find an adorable Smurf plush or a Happy Readers Book. Other QSR promotions will follow in EMEA and the US starting from the end of September.

The first official Smurfs webstore (www.smurfstore.com), managed by TWG (The Wildflower Group) is live from September! From smurf-tastic licensed goods to limitless print-on-demand opportunities, the Smurfs store will marry both the old and the new, providing for Smurfs fans of all ages and generations a place to shop.

Since September, Season 2 of The Smurfs is airing prime time on Nickelodeon in the US and will follow internationally this Fall. The brand-new season has also started its global journey on local free-to-air channels, and soon on many others.

Chris Miller, the Oscar-nominated helmer of 2011’s Puss in Boots, is set to direct Paramount Animation and Nickelodeon Animation’s untitled Smurfs musical, which is slated for a February 2025 theatrical release. 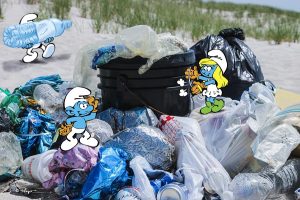 In 2022, the fifth edition of the #EUBeachCleanup campaign,  co-organised by the EU, the UN and our blue friends, the Smurfs, every year in September and October, is focusing on youth, residing under the European Year of Youth umbrella and within the overarching theme of “united against marine litter”. The future generation, international organizations, national leaders, NGOs, and everyone who wants to get involved, can work hand in hand to rid our oceans of this plague.

2023 will be a year to celebrate the 65th Anniversary of the Smurfs. The anniversary logo and a dedicated Style Guide The Smurfs 65th Anniversary. From Paper to Metaverse has recently been released to licensees. The style guide is an ode to the evolution of the Smurfs, celebrating Peyo’s blue pop icons’ heritage. Get ready for the “Smurf-verse” in 2023!