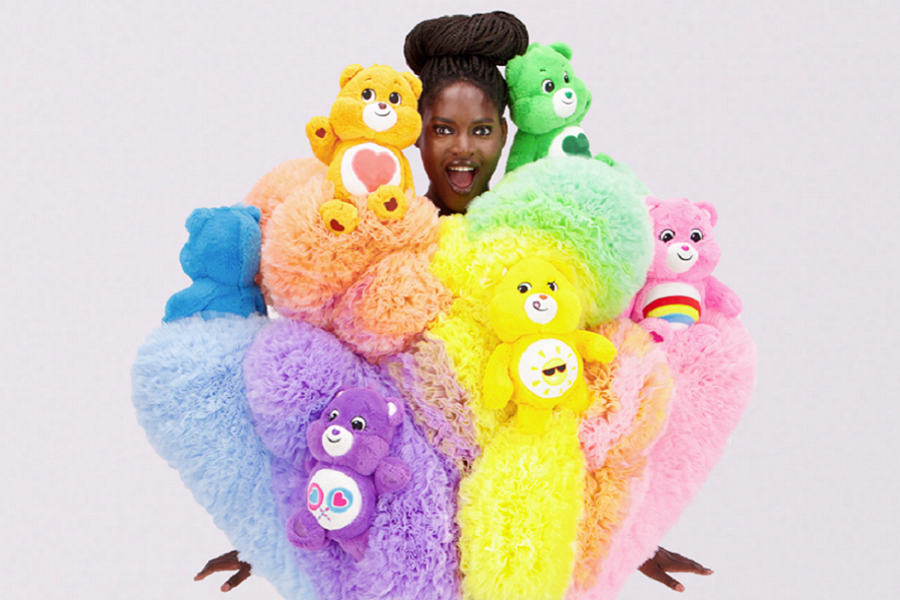 The deal between Cloudco Entertainment and Difuzed BV was brokered by J&M Brands BV. This dress marks the launch of a special fashion collection that will create unique collector’s items as well as a mass market collection, existing of apparel and accessories, in the United States and EMEA starting Q2 2023.

The Care Bears were first introduced in 1982 through consumer products, greeting cards, and later a series of animated television shows and feature films, and quickly became one of the most popular and endearing children’s properties in the world. As the Care Bears embark on new adventures, from Care-a-Lot to the Silver Lining, they never shy away from their core values and invite their viewers and fans to join them in spreading sharing, caring, love, friendship, and togetherness.

To celebrate the Care Bears’ 40th Anniversary, JimmyPaul in conjunction with Difuzed, created a bright, colorful, body-hugging, mini-tule dress inspired by the original illustrations, which pay homage to the Care Bears paintings by Elena Kucharik. The Care Bears express their story in a gigantic rainbow-colored, heart-shaped cloud filled with love, fun,friendship and a touch of whimsy.

“With this creation, I wanted to show all the positive attributes Care Bears and JimmyPaul stand for. While I was working on this dress, the Care Bears made me smile and reminded me how fun it is to create,” shared Jimmy, co-founder and designer, JimmyPaul fashion brand.

“We are honored JimmyPaul and Difuzed chose to celebrate the Care Bears 40th Anniversary with such a special piece. His colorful, whimsical, and dreamy design captured the spirit of the Care Bears perfectly,” said Cloudco Entertainment’s Vice President of International Licensing, Roubina Tchoboian.

“The collaboration between Difuzed, JimmyPaul and Cloudco brings an exciting new retail opportunity from the catwalk to the high street for existing and new fans of Care Bears,” added Gustavo Antonioni, General Manager for Difuzed BV.

Jimmy will be available for interviews and to discuss retail opportunities at BLE on September 20 and 21, 2022 at the Difuzed Booth C161.