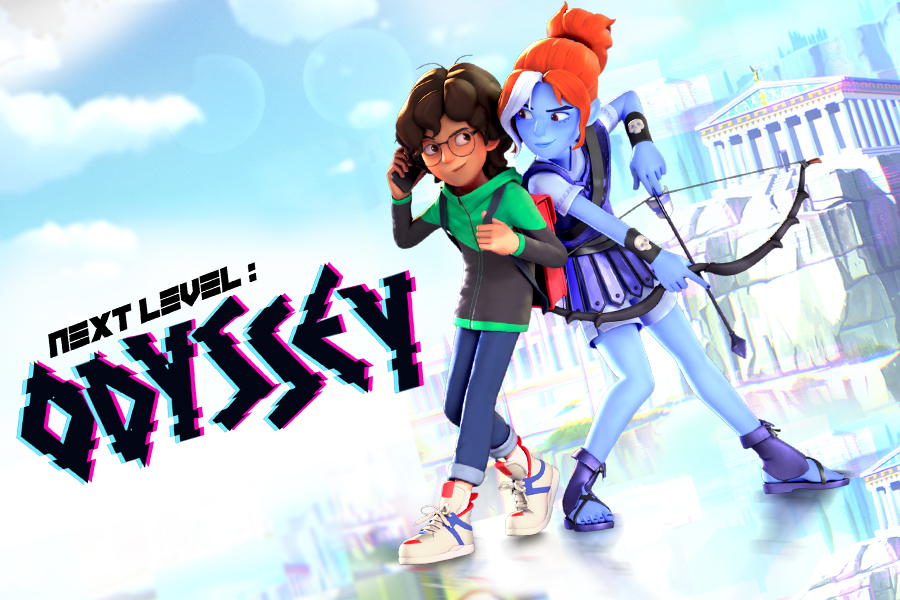 TeamTO has recently announced the participation of mythology consultant Liv Albert and director Didier Ah Koon, on its new action-adventure series NEXT LEVEL: ODYSSEY, which will be presented at Cartoon Forum and Mipcom 2022.

Corinne Kouper, the multi-award-winning Co-Founder of TeamTO and Producer of NEXT LEVEL: ODYSSEY, commented, “Greek mythology is a subject that continues to fascinate young people all over the world, it sparks their imagination. We have a long-standing practice of engaging experts and consultants to ensure the authenticity and perfection of our story telling. This wonderful talented team not only ensures that we will have really interesting stories and background for our series, but also a high level of sophisticated comedy which will be an important element of this show.”

Mythology expert Liv Albert is working with TeamTO’s writing team to provide background and accuracy on all Greek historic and literary references. Liv is the popular and edgy Canadian author and host of the podcast, “Let’s Talk About Myths, Baby!” which explores the infinite world of mythology from an irreverent, feminist and very comical point of view. She is also the author of “Greek Mythology: The Gods, Goddesses, and Heroes Handbook,” and “Nectar of the Gods, From Hera’s Hurricane to the Appletini of Discord, 75 Mythical Cocktails to Drink Like a Deity.”

Didier Ah Koon was the director of the short film “Cro Minion” (released on the “Minions” blu-ray special), and the author of the original comic books “Perseus” (which won the 2019 Nickelodeon kid’s comic book choice award), and “Minions.” He has also worked as a storyboard artist at major studios such as Illumination, Universal and Sony, and has worked on blockbuster movies including “The Lorax,” “Despicable Me 2,” and “The Secret Life of Pets.”  Didier’s work endeavors to reach the largest audience possible through strong storytelling, comedy and provoking emotions by thinking outside the box.

NEXT LEVEL: ODYSSEY (26 x 26”) is an original action-adventure series with a good dose of comedy aimed at the 6–10-year-old target. One night while playing videogames at the Louvre where his dad works, 11-year-old Kiran falls through a portal into the world of mythology where Gods, Goddesses and fantastical creatures are all doing their thing, and Kiran is mistaken for a butt-kicking warrior! His mission – which he must accept if he wants to return home – is to save the legendary Greek King, Odysseus. With the help of his new friend, junior goddess Leuki, Kiran discovers that being a hero takes more than brawn, and that life back-home with his Dad, a workaholic archeologist, wasn’t so bad after all. Worlds collide in this retelling of the famous saga as ordinary-meets-extraordinary on a whole new level. NEXT LEVEL: ODYSSEY is an original re-imagining of a classic story about family, friendship, facing fears, and finding your inner power.

NEXT LEVEL: ODYSSEY is a TeamTO production inspired by the series of books, “Panique dans la Mythologie,” by Fabien Clavel, published by Rageot.

← SUMMER & TODD AND PINOCCHIO AND FRIENDS SOON ON PRIME VIDEO BLE ANNOUNCED THE LICENSE! THIS FINALISTS →