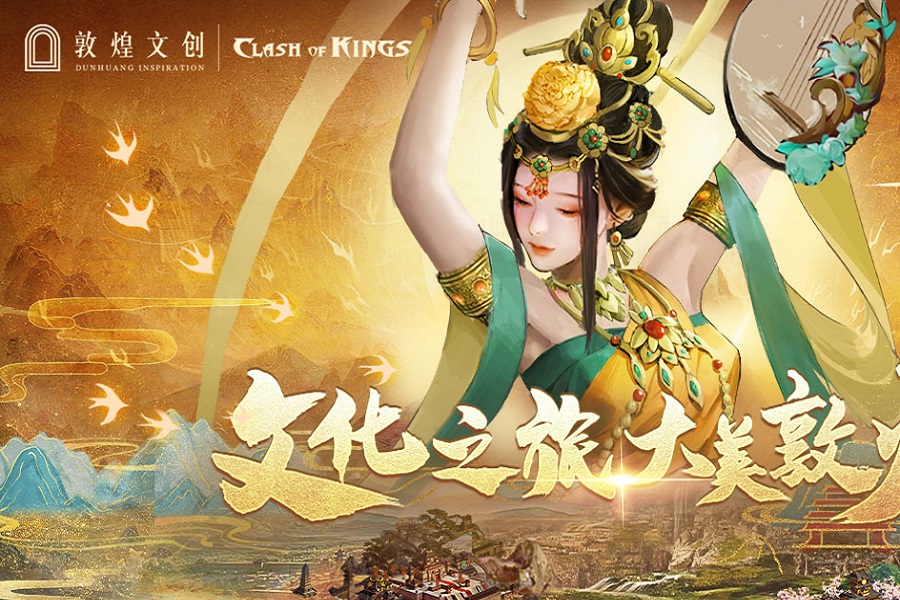 Tags from the story: ARTiSTORY, Clash of Kings, Dunhuang.

A landmark licensing agreement has been reached between mobile game, Clash of Kings, and Dunhuang Inspiration – part of the Dunhuang Culture & Tourism Group.

The 2-year deal, brokered by art and cultural IP specialist ARTiSTORY, gives Clash of Kings exclusive access to the historic assets, artworks and location-based resources of Dunhuang: a historic city, and UNESCO World Heritage site, located on the Silk Road. The IP will feature in a new episode of Clash of Kings entitled ‘Dunhuang Civilisation’, launched on August 4, giving the game’s 300+ million players the chance to explore the ancient city of Dunhuang in a way never seen before. Clash Of Kings is currently available in over 100 countries.

The Dunhuang Civilisation episode will include a new map of Dunhuang for gamers to explore, a new plot and narrative inspired by real stories, a new ‘boss’ for players to contend with and a new character – the ‘Guardian of Dunhuang’ – who will join players on a journey through the culture of Dunhuang. It will also feature new quests such as the restoration of murals, legends of the merchants along the silk roads and Dunhuang treasures, allowing players to learn more about the millennia-old culture. The design and creation of all these elements have been inspired by historic cultural legacies on site, such as ancient murals and artworks.  The game can be downloaded from Google, App Store and Amazon.

ARTiSTORY also recently brings Dunhuang Inspiration to two other creatives deals. One is collaborating with Real Ocean Diving Center to produce a project of underwater photography, along with mermaid tail and dive webbed products. Another is co-creating beatify filters based on portraits with BeautyCam. Before that, Dunhuang Inspiration has been licensed for many projects on digital collectables. Licensees include DigiCAT, NeonKu Technology, Metaverse Market etc.

Sun Xiaoqiang, Chairman of Dunhuang Culture & Tourism Group commented, “For games like Clash Of Kings, licensing cultural IP in this way allows them to bring a whole new layer of discovery, experience, and novelty for gamers to enjoy that is totally unique to them. For Dunhuang Inspiration licensing our IP brings a whole new audience to Dunhuang’s legacies and allows them to live beyond the physical realm of the site. Everyone wins.”

Liu Fangshuo, Producer of Clash of Kings commented, “It has been a great adventure to create the Dunhuang episode of Clash of Kings. Working with Dunhuang Inspiration and ARTiSTORY to bring it all to life has been a rewarding experience and we can’t wait to introduce Dunhuang to our global community of players.”

Jing Han, co-founder ARTiSTORY comments, “The deal between Clash of Kings and Dunhuang Inspiration indicates how mobile and video games are responding to consumer demand for greater authenticity, realism and – most importantly – totally unique experiences via the games they play. Allowing gamers to experience real, living history and culture can achieve this like nothing else can and we are seeing other museums and cultural institutions seeking opportunities in the gaming world.”