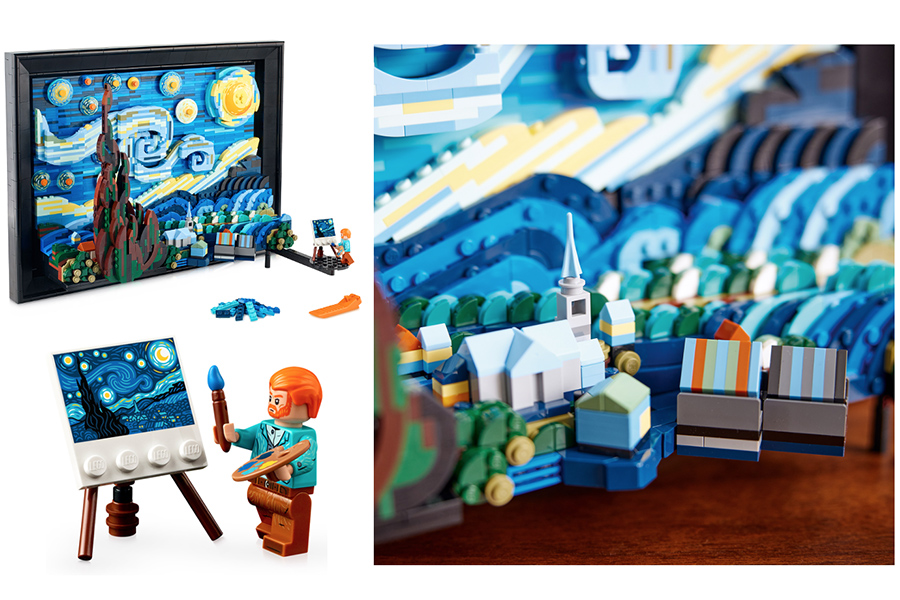 Tags from the story: Lego, The Museum of Modern Art, The Starry Night.

The Museum of Modern Art announces the launch of a new LEGO® Ideas set inspired by one of the most iconic works in MoMA’s collection, Vincent van Gogh’s The Starry Night (1889). The three-dimensional set reimagines the renowned painting—which has been in MoMA’s collection since 1935—in LEGO form, emphasizing the artist’s striking brush strokes and color choices. The set will be available on June 1 for the general public at store.moma.org, at MoMA Design Stores in New York, and at LEGO locations globally.

Inspired by the view from his window at the Monastery of Saint-Paul de Mausole asylum in Saint-Rémy, France, where Van Gogh spent 12 months, The Starry Night is one of the world’s most well-known Post-Impressionist works. Van Gogh heralded modern painting’s embrace of mood, expression, symbol, and sentiment. The new LEGO set was originally conceived by LEGO fan Truman Cheng, a 25-year old Hong Kong based LEGO fan, through a submission on the LEGO Ideas platform, and was developed when he realised that stacking different LEGO pieces together captured the look of Van Gogh’s iconic brush strokes.

With this set, LEGO fans can translate Van Gogh’s vibrant, expressive brushwork into three dimensions and bring a piece of MoMA’s collection into their home. In addition to elements comprising the painting’s iconic moon and stars above and village below, the LEGO set also includes a Van Gogh mini-figure, complete with a paint brush, palette, easel, and mini painting on a printed tile.

“At MoMA, we celebrate the opportunity to connect art and audiences, and are thrilled to be part of a new way to experience Van Gogh’s work, and to inspire the creative impulse in people of all ages,” said Sarah Suzuki, Associate Director, The Museum of Modern Art.

“At the LEGO Group, we want to inspire the world to get creative, so we’re incredibly proud to have brought this set to life in partnership with such an iconic institution as MoMA, allowing fans to be artistic with bricks, and to create and display their own masterpiece,” said Federico Begher, Head of Global Marketing.

The LEGO Ideas The Starry Night set will be available early on May 25 for MoMA members and LEGO VIPs, and on June 1 for the general public at store.moma.org; at MoMA Design Stores in New York, Japan, and Hong Kong; and at LEGO Stores and LEGO.com/Starry- Night. The set retails for $169.99.