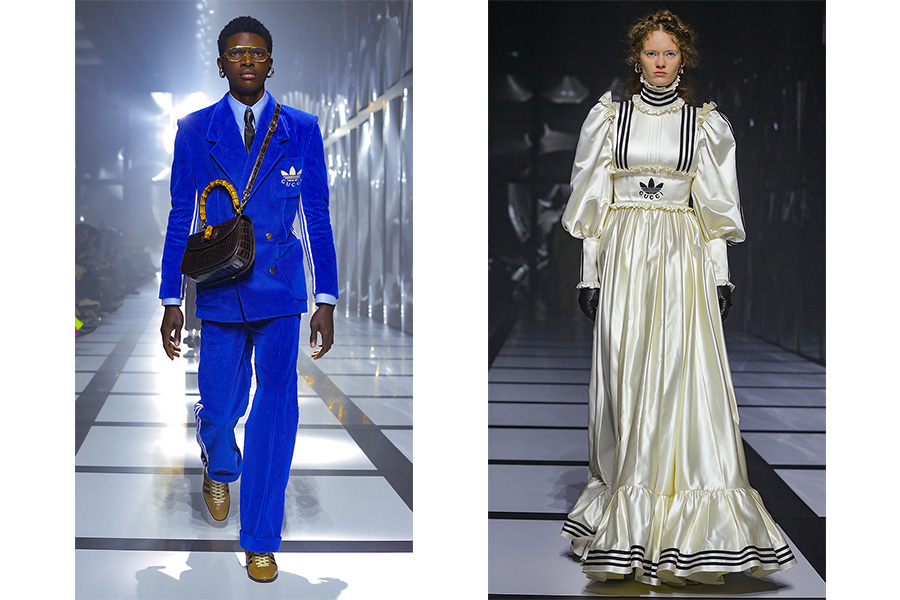 GUCCI AND ADIDAS TOGETHER FOR A CASUAL BUT REFINED COLLECTION

Tags from the story: Adidas, GUCCI.

In today’s era, where styles are increasingly hybrid, Gucci and Adidas have entered into a collaboration for a range of products including dresses and accessories such as bags and hats

The Adidas x Gucci series was presented last March during the Milan Fashion Week Autumn/Winter 2022/2023 and was an immediate success on social networks. The co-branding operation represents a true stylistic fusion between the sports wear by Adidas and the luxury fashion embodied by Gucci.

The collection features garments that represent the aesthetic traditions of both brands. Such as the double-breasted jacket featuring the Adidas logo, fingerless gloves (with the Gucci logo) and the Adidas signature Gazzelle trainers with vertical stripes available in different models. All the items presented are available for both men and women.

This is not the first time that Adidas has signed for collaborations with luxury brands, such as those with Stella Mc Cartney, Jermey Scott, Missoni and last year Prada. As well as the Florentine brand, which last year collaborated with The North Face on a series of products for mountaineers, skiers and snow athletes.

Meanwhile, the clothes from the collaboration between Gucci and Adidas received their first awards. Singer Harry Styles (former Gucci ambassador) shared promotional photos of his latest synth-pop single ‘As It Was’ on his social channels, showing himself wearing a pair of the much-acclaimed Adidas x Gucci Gazelles, yet to be released on the market. Bella Hadid was also recently photographed wearing Gazelles on a public outing. As for the fashion shows, Coperni recently chose trainers as the matching shoes for the autumn-winter 2022-2023 collection.

In short, the Adidas x Gucci promotion campaign reflects all the current advertising canons: from appearances on the most famous catwalks to the involvement of the most followed personalities on social networks and to the supply of their products to other brands.