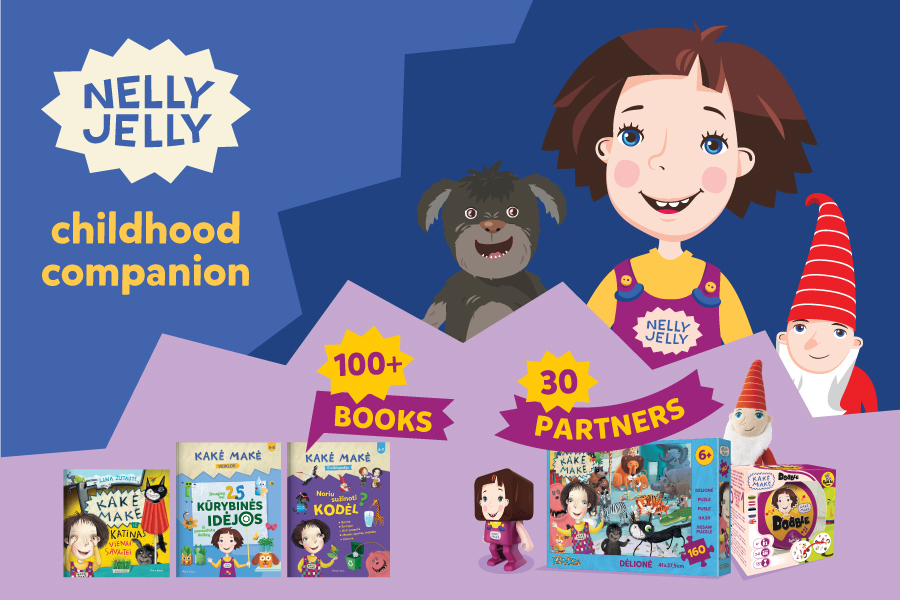 THE IMAGINARY FRIEND OF EVERY KID THAT BECAME VERY REAL

Tags from the story: Nelly Jelly.

Created back in 2010 Nelly Jelly, or Kakė Makė, as it is known in its native Lithuanian market, went from an obscure drawn character to a pop culture phenomenon present in almost every Lithuanian household. From a raised eyebrow “Nelly What?” to the most awaited guest at children parties. From negative and skeptical reactions by publishing houses to long queues at bookshops hosting the next installment of Nelly Jelly stories.

How did it happen? As Lina Žutautė, creator of Nelly Jelly recalls there three thing that led her to draw the beloved character. “Recollection of childhood. The time when every new discovery was wonderful, when each hour and minute was so full of questions to be asked and so few of them were answered”. Likewise, Lina noted that lots of parent were experienced sense of guilt, that amidst ever accelerating pace of life they were delegating education of kids to TV, YouTube, cheap mass-produced toy-knockoffs, anything but themselves. And, finally, that we all were missing key element in children upbringing – fun, joy and entertainment.

That’s how Nelly Jelly, an accidental nickname for a naughty and curious kid was born, which soon grew into a universe inhabited with other irreverent and funny characters, who always stumbled into funny situations and always came out from their adventures wiser and funnier.

Nelly Jelly must have really struck the cord with Lithuanian kids and their parents, as during two decades it became the most popular household name among Lithuanian families, with 10 Nelly Jelly books published, more than 500 000 printed copies in total, 105 SKU of other publishing projects, also with 1 500 000 printed copies in total. Nelly Jelly copyrights are sold to 13 countries: Latvia, Estonia, Israel, Poland, Russia, Ukraine, Romania, China, Japan, South Korea, USA, Italy and Brazil.

It could not translate into something other than into 1st place in top-of-mind awareness among Lithuanian brands, 2nd place in spontaneous awareness, 3rd place in brand recognition, 4th favorite children’s character and, of course, considered the most educational of all.

Lina explains it by Nelly Jelly always staying true to its values. “Nelly Jelly always speaks like a true kid would do, and it’s stories are simple everyday stories that everybody can relate to, parents and children alike. Stories about discovering the world and yourself” Naturally, Nelly Jelly outgrew book-only format. Accompanying games, apps, live shows, all resulting that on average every one out of 300 thousand children born in Lithuania during the last decade has met Nelly Jelly one way or another. And not once – more than six times during his and her childhood, more than 48 million views in just three years, and this achievement in the Lithuanian market, which sees only 80 thousand kids entering it every year.

The metaverse of Nelly Jelly merchandise and accompanying products. There are 30 active partners in the native Lithuanian market, and only in 2021 the market saw 500 thousand of products with Nelly Jelly brand. They were met with award nominations and awards, for instance, Nelly Jelly confectionary set became Best New Sweet Product in 2019, in 2021 Nelly Jelly food supplements were shortlisted for the best in the category in 2021. The same year tech products entered the world of Nelly Jelly – dancing speakers, storytelling diffusers, board games, this year gardening book and content about sustainability are in the pipeline. And, of course, the biggest hit of the season looms ahead – 2022 is the year of animated series, with 8 episodes being scripted and animated. Pilots will be released in 2023 in English and Lithuanian. As you see, Nelly Jelly world reinvents itself constantly, filling it with new and new discoveries. All aimed at making the childhood more fun, joy and memorable.