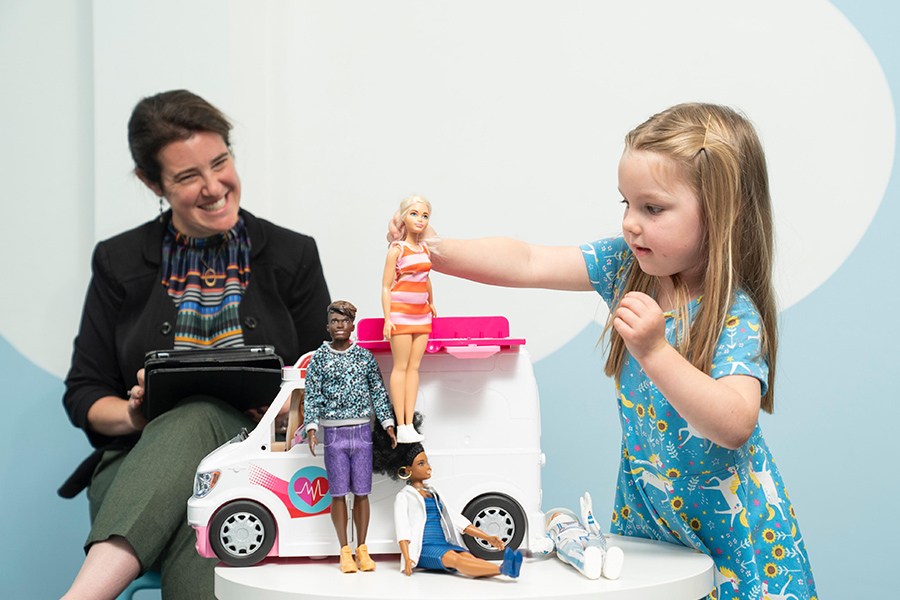 DOLL PLAY PROMPTS CHILDREN TO TALK ABOUT OTHERS’ THOUGHTS AND EMOTIONS

Tags from the story: Barbie, Mattel.

Year two of the study builds on long-term research from Cardiff University neuroscientists exploring the impact of doll play on children, commissioned by Barbie®

Mattel, Inc. (NASDAQ: MAT) announced that Barbie and a team of neuroscientists at Cardiff University have released the latest findings from a multi-year study exploring the short and long-term developmental impacts of doll play. In the study’s second year, researchers investigated the importance of what kids say while they play and found children use increased language about others’ thoughts and emotions when playing alone with dolls.

The latest research found children talked more about others’ thoughts and emotions, a concept known as internal state language (ISL), when playing with dolls than while playing tablet games. Speaking about others’ internal states allows children to practice social skills they can utilize when interacting with people in the real world and can potentially be beneficial to children’s overall emotional development.

“When children create imaginary worlds and role play with dolls, they communicate at first out loud and then internalize the message about others’ thoughts, emotions and feelings,” said researcher Dr. Sarah Gerson. “This can have positive long-lasting effects on children, such as driving higher rates of social and emotional processing and building social skills like empathy that can become internalized to build and form lifelong habits.”

During observation of children*, researchers saw increased brain activity in the posterior superior temporal sulcus (pSTS) region when they spoke as though their dolls had thoughts and feelings. The pSTS region is heavily involved in the development of social and emotional processing skills, further supporting year 1 findings, that even when children play by themselves with dolls, it can help build vital social skills like empathy.

The study used state-of-the-art functional, near-infrared spectroscopy equipment to explore activation of the brain while children played with dolls and on tablets, both by themselves and with another person. The researchers found playing with dolls prompted more ISL about others than playing with tablet games, and using ISL about others was related to increased pSTS activation.

“Internal state language can indicate that a child is thinking about other people’s thoughts and emotions while playing with dolls,” said researcher Dr. Sarah Gerson. “These skills are really important for interacting with other people, learning from other people, and navigating a variety of social situations. It becomes important for making and sustaining friendships, and how they learn from their teachers, and parents.”

Empathy and social processing skills appear to be highly valued by parents and essential as children continue to grow emotionally, academically and socially. In 2020, Barbie independently commissioned a global survey** that suggested 91 percent of parents ranked empathy as a key social skill they would like their child to develop, but only 26 percent were aware that doll play could help their child develop these crucial skills. Parents and caregivers have also been increasingly concerned over their children’s developmental track during the last two years. In fact, 61 percent of parents reported that their child’s social-emotional development had been negatively impacted by the pandemic***.

While cognitive and social stimulation outside of homes has been limited due to the pandemic, the Cardiff University research suggests that doll play can offer kids the opportunity to emulate scenes and interactions from their daily lives. Children mimic what they see their parents, teachers or peers say and do, and dolls can give them an outlet to recreate what they’ve seen and heard to rehearse skills they can use in real-life social situations.

The research also suggests that these findings are gender agnostic – revealing the comprehensive critical importance of doll play in practicing social skills.

“We’re proud that when children play out stories with Barbie and vocalize their thoughts and emotions, they may be building crucial social skills, like empathy, that give them the tools needed to be confident, inclusive adults,” said Lisa McKnight, Senior Vice President and Global Head of Barbie and Dolls, Mattel. “As leaders in the dolls category, we look forward to uncovering even more benefits of doll play, grounded in neuroscience, through our long-term partnership with Cardiff University.”

In Fall 2020, Cardiff University and Barbie unveiled the first year results of the study, Exploring the Benefits of Doll Play through Neuroscience, published in Frontiers in Human Neuroscience. Further information on the first year results can be found here. This multi-year research effort explores the short-term and long-term developmental impacts of doll play, with new stages of research and results being conducted through 2024.

Parents and caregivers can visit Barbie.com/Benefits to learn more about the research and access resources.

*Study was commissioned by Barbie. Study was conducted with 33 boys and girls aged 4-8 years old