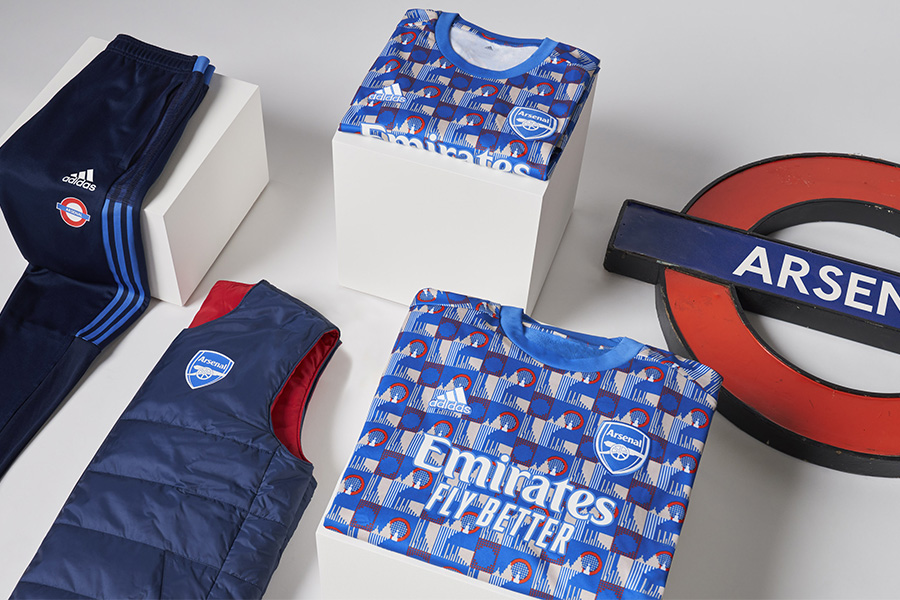 ADIDAS AND ARSENAL LAUNCH COLLABORATION WITH TRANSPORT FOR LONDON

Tags from the story: Adidas, Arsenal, Transport for London.

Adidas and Arsenal have created a pre-match range in collaboration with TfL. The pack includes an all over print of the seat moquette design used on London’s Piccadilly line

adidas and Arsenal have launched a collection in collaboration with Transport for London (TfL) to celebrate the historic connection between the football club and the  London Underground.

The range celebrates Arsenal station – the only Underground station to be named after a football club, following its change from Gillespie Road in 1932. This came after concerted lobbying from visionary manager Herbert Chapman, who wanted to make it much easier for supporters  to instantly know how to get to see the team and to cement the identity of the club into the local area.

The collection is inspired by the seat pattern or “moquette” which appears on the Piccadilly line trains  that run through Arsenal Tube station and the bold and disruptive all over print is seen on the prematch  jersey and warm top, which the players will wear to warm up in ahead of games between now and the  end of the season.

There are five pieces in the range which also includes a youth jersey – matching the adult shirts – as well as a reversible padded vest and pant – both of which have navy base colour, and subtle Arsenal tube  station sign off.

“Arsenal station has had a deep relationship with the football club for almost 90 years and there is nothing quite like the atmosphere and excitement on a match day. I look forward to seeing fans passing through the station wearing this eye-catching new pre-match range on their way to and from the  stadium.”

As part of the campaign, adidas has also teamed up with London-based artist and Arsenal fan Reuben  Dangoor to create and design a special, limited-edition Oyster card.

Consumers can have the chance of claiming the card, which is pre-loaded with £15, by purchasing an article in the range via the adidas app. There is also a chance to win one via a first-come-first-served free to enter opportunity to adidas Creator Club members.

Reuben Dangoor, artist and Arsenal fan, said: “Arsenal is the only football club to have a tube stop named after it. Originally known as Gillespie Road, it was renamed in 1932, as the stop ran close to the  former ground; Highbury. The Finsbury Park stop is also the most frequently used by match day fans  travelling to The Emirates Stadium.

“To celebrate this link, I wanted to depict the old and new stations – from 1932 to 2022 and I’m hoping fans really like the product range and the Oyster card I’ve created.”

The pre-match jersey will be first seen on the men’s team in tonight’s clash between Arsenal and Liverpool in the Carabao Cup semi-final second leg at The Emirates.

The range will be available across adidas.com, in store as well as Arsenal official club stores and selected retailers. For more information, follow @adidasfootball on Instagram and Twitter, or visit www.adidas.com, as well as www.Arsenal.com.