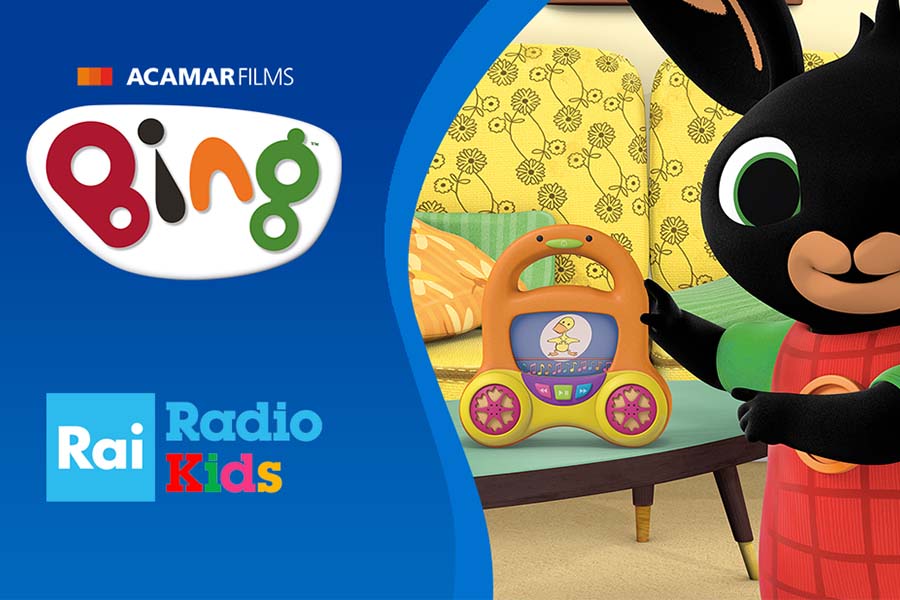 Bing, already a star of both small and big screens and of the stage, arrived onto the radio too with his debut on Italy’s Rai Radio on 18 November. The hero of Acamar Films’ hit pre-school show, which is one of the most popular programmes among Italian children, was a special guest of Armando Traverso on his children’s show Big Bang on Rai Radio Kids.

Armando, along with his regular contributors, puppets Lallo and Lella, chatted with Bing about his day and talked about their favourite games. The episode aired at 1pm, 4pm and 6pm on 18 November on Rai Radio Kids, and will be available on Rai Play.

Isabella Carbone, Programme Director, Rai Radio, said: “As a lovable, authentic pre-schooler, Bing is the perfect guest for Rai Radio Kids. We are all big fans of his so we are hugely excited that he made his first-ever radio appearance on Big Bang. It’s a great coup for our young listeners and we know they were thrilled to hear their favourite TV star on their favourite radio show!”

Since its launch on Rai Yoyo in 2018, Bing has become a top show. It consistently ranks in the top 10 on linear and was the most-viewed title on RaiPlay for kids 4-7 in the first six months of 2021. New episodes from Series 4 premiered on Rai Yoyo in February 2021 and are currently airing and available to watch on RaiPlay.

As well as its massive popularity on TV, Bing also has a hugely successful dedicated Italian YouTube channel and freemium interactive app plus a robust, extensive and expanding Italian licensing portfolio managed locally by the Maurizio Distefano Licensing agency.