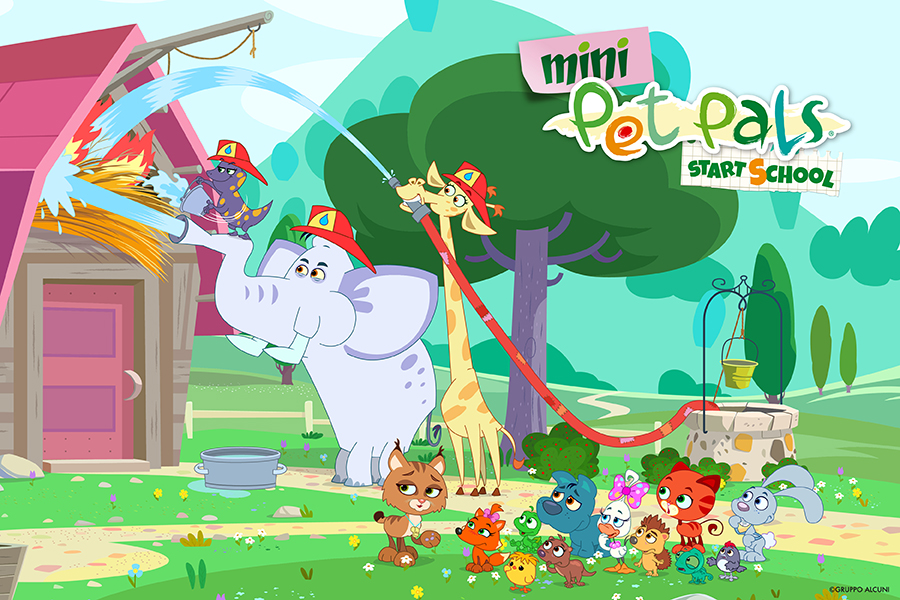 In the new season of Mini Pet Pals the school teaches to be curious, participate and also to make mistakes

From October 18th it’s on Rai Yoyo the 4th season of the animated preschool series Mini Pet Pals, co-produced by Gruppo Alcuni and Rai Fiction, with 52 unpublished episodes of 5 minutes, broadcast every day from Monday to Sunday at 7:00 and Saturday and Sunday also at 17:20, available as well on the Rai Play streaming platform.

After facing many adventures in the meadows and in the woods, the new episodes see the Mini Pet Pals living their first experiences at school.

This is a particular school, where the game becomes the tool to learn and to know themselves and the surrounding world, as well as to experiment the relationships with others.

This place is also an opportunity to meet many new companions, including Dazzle the Chameleon, who is very good at hiding, Curly the Hedgehog, a bit bully, Jasmine the Otter, who has a crush on Tophat, Coco the Fox, vain and always in competition with Diva for elegance, Nicky the Woodpecker, passionate about video games, Freddy the Earthworm , who discovers how to sing.

In this school there are no traditional lessons, but knowledge takes place through the experience of doing, so the Mini Pet Pals and their companions are free to test themselves in various ways: reciting, learning to play in groups, visiting city and museums, playing with math, and so on. In these new adventures the action is always stimulated by the research and the curiosity of the Mini Pet Pals. The school environments will be the subject of a continuous discovery by the students: the drawing classroom, the gym, the theater, the room of surprises, in addition to the canteen and the garden, which represents the first space of access to the school, where the little students find themselves to exchange opinions and make friends.

During their course, the Mini Pet Pals and their companions are welcomed and guided by teachers, who are adult and expert figures, able to help students in learning, and play the role of attentive educators, without creating contrast situations.

Among them are: Esther the Turtle, the school’s principal, Vee the Bear, who teaches theater in a creative way, Otis the Owl, drawing master, Laura, the Lynx, physical education teacher, Sebastian the Flamingo, professor of music, Celeste the Stork , the animator that teaches to use objects creatively, Charlie the Raccoon, eclectic teacher capable of stimulating the curiosity and fantasy of the students thanks to its projections. To these are added the peaceful and reassuring Ludo the Badger, factotum and driver and Antoine the Boar, the school’s cook.

In the new episodes the Mini Pet Pals are involved in different kinds of occupation, both at school and out of school. In the school, during the game situations, the typical dynamics that are created between children are reproduced: the competition, the difficulty in respecting the shifts of others, the small envies and jealousies, and so on. In the episodes, students are involved in multiple creative and artistic activities. For example, they are introduced to the observation of nature and the most famous art pieces as well as to the creation of art and crafts works.

Thanks to theatrical activities, they learn the most secret aspects of this form of art, developing the ability to tell and express themselves. There are also moments dedicated to the personal reflections of pupils arising during their school experiences.

Even in these new adventures the Mini Pet Pals are in the company of Methuselah. the wise tree, always available to listen to the little ones, helping them in finding solutions to their problems.

The development of the series has made use of a significant scientific advice, with the contribution of Dr. Anna Antoniazzi, associate professor at Genoa University, where she teaches literature for childhood and pedagogy reading, and Dr. Cosimo di Bari, researcher of general and social pedagogy at the University of Florence.

The school told in the new season of Mini Pet Pals is well explained by Dr. Antonazzi, who as a scholar of infant imagery, participated in the definition of the pedagogical-educational context where the new episodes are placed: “This context provides on the one hand the creation of particular environments and furnishings able, simultaneously, to make the little ones feel at ease and to stimulate them  to discover, to ask, to be curious; on the other hand, it enables participatory strategies  aimed at establishing a constructive relationship between the Mini Pet Pals and the adults  with whom they interact. The school narrated by the new episodes of the series is, therefore, a sort of “ideal” school, conceived “montessorialy” in a child-friendly way.

A school “active”, full of colors and stimuli, where the young protagonists can learn in a funny way, deal with different realities and, why not, even make mistakes, thinking with Rodari that “ Mistakes are necessary, useful as bread and often also beautiful”. But even a school where books and stories never lack, because they also help to grow … “

The 4th season of Mini Pet Pals, confirming the particular sensitivity to educational themes presented in a playing context, thus enriched very innovative content, able to give new impetus to the I.P. and reinforce the engagement of the little fans, providing ideas for new developments of licensing and merchandising.