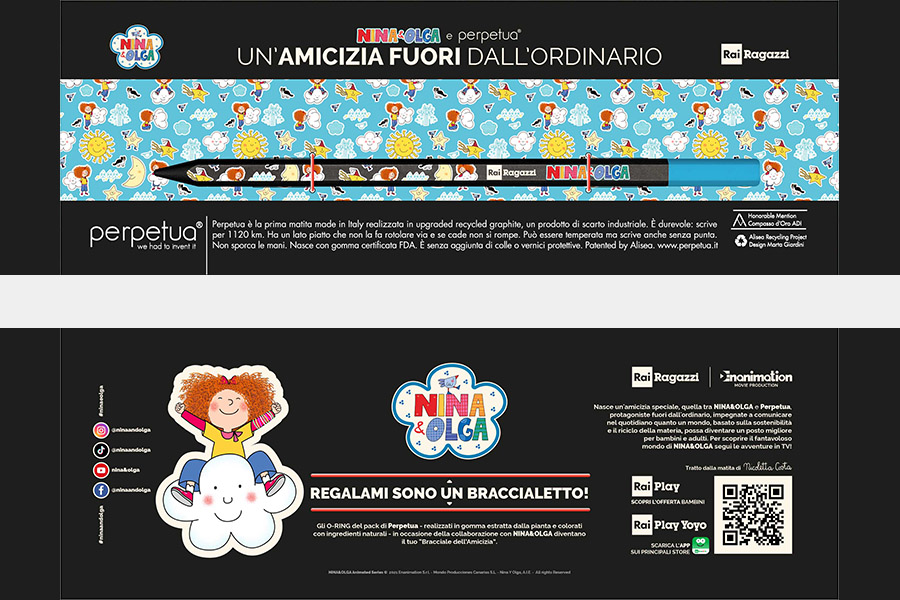 NINA, OLGA AND PERPETUA THE PENCIL. A FRIENDSHIP OUT OF THE ORDINARY

At the Turin Book Fair a new project was announced, starring Nina&Olga, who are already on the small screen with the TV series of the same name recently launched on Rai Yoyo, on demand on Rai Play and in bookshops thanks to Mondadori – Libri per Ragazzi.

This time Nina&Olga have made friends with a very special friend, Perpetua the pencil, whose first product launch took place at the Turin book fair. Perpetua® the pencil is famous all over the world as an example of circular economy and is produced thanks to the reuse of graphite scraps. An entirely Made in Italy pencil that, with its simplicity, speaks of sustainability, the environment, respect for nature and a series of positive values that fit perfectly with the identity of the television property Nina&Olga.

The common thread linking these two brands is a shared ‘thinking outside the box’ that redraws the boundaries of their respective realities. Perpetua is a unique product, created with the aim of bringing a different point of view to the world of design; in the same way, Nina&Olga tells of a unique friendship between a little girl and a cloud that, perpetually in mid-air flight, gives its special friend an ever-changing perspective on reality, advancing the concept that looking at things with new eyes and free from patterns can only be a point of strength and growth in facing life.

This special friendship, born thanks to the collaboration with Rai Ragazzi, is expected to last over time. A Limited Edition of Perpetua® pencil was distributed in Turin, as a gift to those who attended the events in which Nina&Olga were protagonists. In addition, a limited quantity of the special pack was sold at the Nicoletta Costa Store stand (Pad. 3 Stand P45). In addition to the Perpetua® pencil, which will immediately become a must-have product for fans of the sector, but also for the many fans of Nina & Olga and Nicoletta Costa, the packaging also includes a pretty collectible bracelet, also made from natural elements.