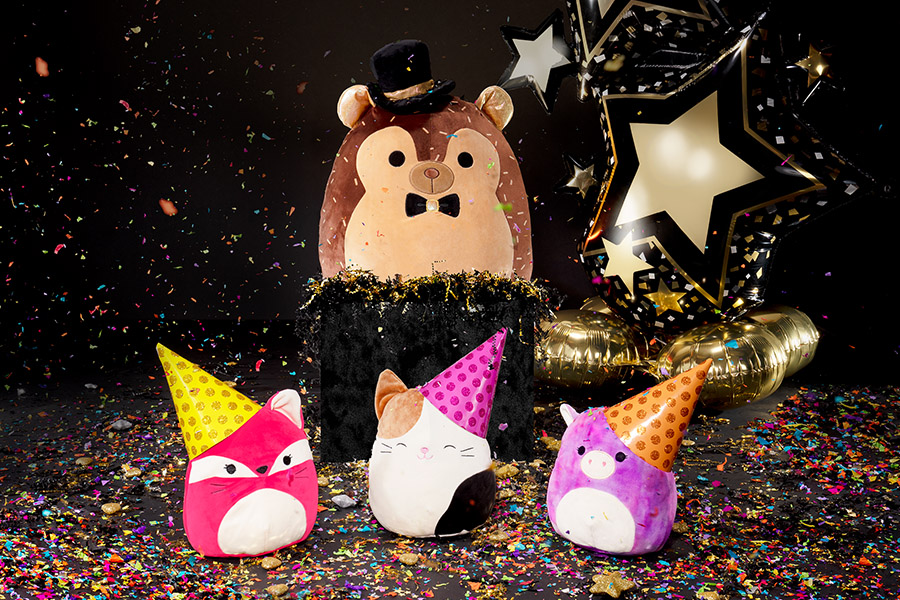 Jazwares, a global leader in toys and licensing, along with its Kellytoy subsidiary, announced a significant milestone surpassing 100 million Squishmallows® sold since the plush toy line first came to market in 2017. The momentous occasion is being commemorated with a celebration of the fans and introduction of an all-new Select Series Hans.  As part of the celebration, the Squishmallows brand will launch a #GetGoldenHans video hashtag contest on social media with 100 winners. One of the new Select Series Hans has been identified as the one hundred millionth and will be offered at auction to raise funds that will go directly to Art in Action. The organization provides classroom lessons that inspire critical thinking and creativity with engaging visual arts experiences. In addition, the Squishmallows brand will donate $50,000 to Art in Action to further support their efforts.

In honor of the 100 millionth milestone celebration, Hans, one of the core characters from the original Squishmallows Squad, is back with a fresh new look, complete with celebratory top hat and bow-tie. This Select Series edition of Hans will be offered in two styles of the popular 16-inch size with limited quantities available for purchase, at Squishmallows.com:

Like all Original Squishmallows, the Select Series Hans has a unique biography: “Hans has a heart of gold and he can’t wait to share it with you! Whether it’s enjoying some movie magic or cooking up something new in the kitchen, he’s ready for a new adventure. He is thankful for all his friends and this friendship is one milestone he can’t wait to celebrate!”

A 24-inch Golden Hans of which only 30 will be produced will be the rarest Squishmallows yet and one of them has already been identified as the 100th million Squishmallows and will include a special hangtag signed by Kellytoy’s Co-President Jonathan Kelly. This one-of-a-kind Golden Hans will be offered at auction on eBay starting October 12 at 9 a.m. (Pacific time) to help raise additional funds that will go directly to Art in Action. Another 25 will be awarded to #GetGoldenHans hashtag contest winners; the remaining 75 winners will receive the Hans with Golden Details.

The #GetGoldenHans hashtag contest entrants will be asked to post a video (no longer than 60 seconds) celebrating Squishmallows and their prized squads and collections to either Instagram, Facebook, or Twitter with the #GetGoldenHans hashtag by Friday, October 15. Details will be posted on @squishmallows social media channels and select entries will be shared and featured throughout the celebration.

“I want all fans and collectors to know how inspiring they are to the Squishmallows brand, and how much we appreciate and share their passion for our characters,” said Kelly. “It is because of them that we have achieved this amazing milestone. We are so excited to share what’s coming later this year and beyond. In addition to introducing many more new Squishmallows, we will be announcing several other exciting initiatives to engage our fans and collectors online and off.”

Since Squishmallows debuted, the huggable plush pals known for their ultra-soft feel and whimsical design have delighted fans of all ages, both online and in person. The cuddly, collectible characters are a social media sensation that continue to cultivate a strong following online. Organic Squishmallows content has generated nearly five billion video views on TikTok and @squishmallows (and related hashtags) have been tagged in more than one million Instagram posts. The Squishmallows social media channels have ballooned to more than 700,000 followers and nearly 100 global and local Facebook groups have been created by fans.

Over 1,000 Squishmallows characters ranging from two to 24-inches in size have gained the attention of bona fide Squishmallows fans in more than 40 countries. Such strong brand retention has prompted a bevvy of line extensions, including HugMees ™, Squish-Doos ™, Heroes, Flip-A-Mallows™, and Squishville™. Each of the Squishmallows have a unique name and backstory that brings the character’s personality to life.

Squishmallows are sold at thousands of retail outlets across the county, whether independent and specialty stores, amusement parks, or national chains such as Target, Five Below, Walgreens, Walmart, Learning Express, Cracker Barrel, CVS, Costco, Justice, and Hallmark.