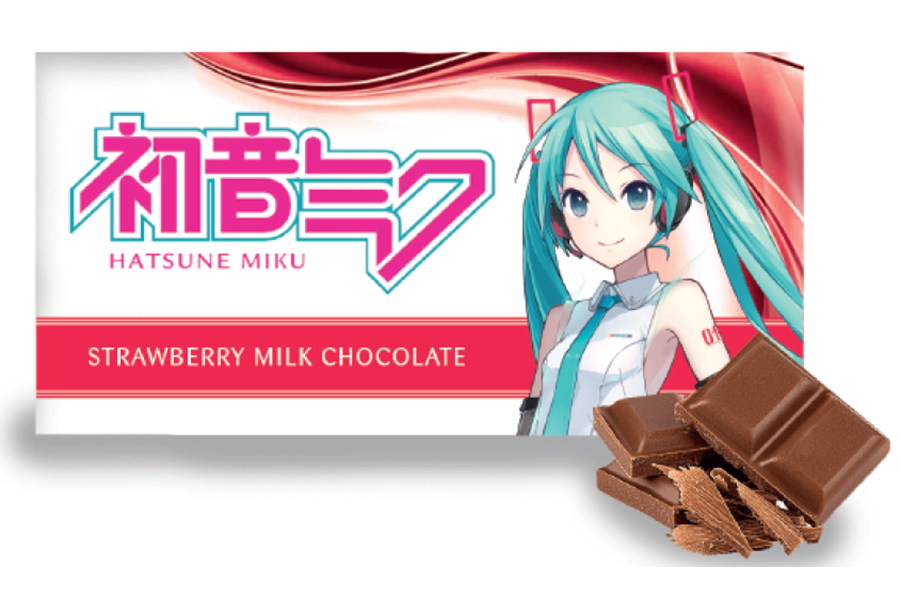 Four other flavours of chocolate arrive soon, to be followed by a wide range of Miku fizzy drinks

Hatsune Miku, the virtual pop star, now appears on a chocolate bar that is currently smashing it out of the park exclusively at HMV in the UK. Sales are so strong it is said to place in the top 5 items overall, 2 months after it debuted. The high price point of £1.99 ($2.68) is no deterrent to the fans who view this equally as both a collectible and an edible item. Social media activity has seen huge frustration from fans outside the UK who cannot yet get their hands on it:

But that is set to change soon as Kawaji are in talks with suppliers to the US market and are actively seeking distribution in other territories.

Four other flavours of chocolate (white, mint, orange and strawberry) arrive soon, to be followed by a wide range of Miku fizzy drinks, starting with blueberry flavour. After that the famous soda of Japan, ramune, will debut as a Miku ramune. This will be made in Japan in a glass bottle, with a marble as a stopper in the traditional way.

Max Arguile of Reemsborko commented, “HMV could have asked for any brand but specifically asked for a Hatsune Miku chocolate bar and their faith has been truly rewarded – I’m delighted for the licensee and the retailer”

Rich Woodall of Kawaji Ltd commented, “This is just the beginning for Kawaji – look out for plenty of other licensed confectionary and drinks coming soon”