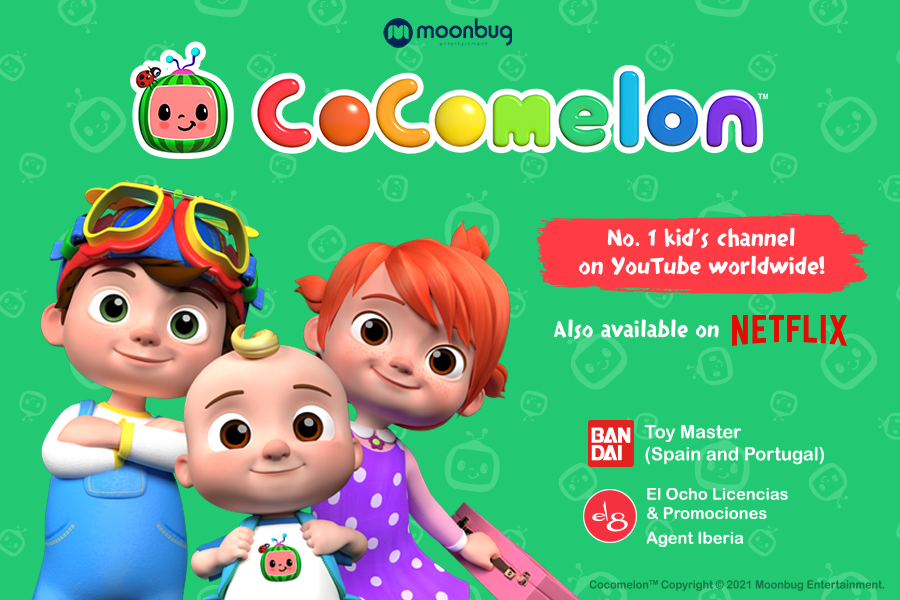 EL OCHO ADDED SOME NEW BRANDS TO ITS PORTFOLIO

El Ocho continues to expand its catalog with major brands in the market, including some of the most innovative categories and unusual targets

In 2021 El Ocho added some amazing new brands to its portfolio, focusing on new trends and digital hits. Three of the most important new brands added to El Ocho’s portfolio are CoComelon, Blippi and My Magic Pet Morphle, from U.S. producer Moonbug

Following an omnimedia trategy and adapting to new forms of consumption, El Ocho continues to expand its catalog with major brands in the market, including some of the most innovative categories and unusual targets. With this strategy in mind, El Ocho will implement some great initiatives at the point of sale in key retailers in the national market during its upsoming Christmas campaign.

With the launch of master toy licensee Bandai’s toy line, El Ocho managed to position the brand in the back-to-school season with an unprecedented event at La Vaguada, one of the most important shopping malls in Madrid. The launch enjoyed great success and re-opened the event season after the pandemic. The brand will be positioned in 100% of the retail channels. Cocomelon is the No. 1 kids educational Youtube channel and the 2nd overall Youtube channel in the world, with 117M subscribers and 150M unique monthly viewers. It continues its road to success with a steadily increasing licensing portfolio.

Blippi, a series with 30 million+ subscribers on YouTube and 20 billion views over the past three years, is currently streaming over 500 episodes and 50+ hours of content on Youtube, Netflix and Amazon Prime. Jazwares is the Global Master Toy partner and distributor in Iberia. Morphle boasts 500 million views per month and over 23.2 million subscribers across all channels. El Ocho is preparing their licensing launch for 2022.

Brave Bunnies is a new brand in El Ocho’s portfolio created by Glowberry and Anima. Recently launched in the UK on Channel 5 and in Italy on Rai Yoyo with excellent results, the series will be broadcast on Clan TVE in Q4 2021. El Ocho is currently developing the licensing program, which counts Spin Master as the master toy partner and PRH as the main publisher in Spain.

True and the Rainbow Kingdom

True and the Magic Kingdom wins kids over with its visual appeal, humor and thoughtful characters, and has a great social and digital reach with over 25M subscribers on their social networks and 630 million Youtube channel views. The series 20 episodes of 22 minutes each were released on Clan in September 2021. El Ocho has bet on this great brand, with Bandai as the national master toy partner, and ambitious plans for a 2022 licensing program.

Dragon Ball continues to be a top-performing major brand in Spain as Bandai keeps boosting the property every year, capitalizing on the great anime trend seen throughout the market. In 2021 giants in the textile sector such as Pull & Bear, Bershka, Tempe or Sprinter have also concentrated their efforts on creating new product lines and preparing great collections for their Christmas campaigns. Other deals for 2022 are still in negotiation with key market players such as Zara, Lefties and the Tendam Group. The current licensee portfolio, which includes Play by Play with a new line of entertainment, Grupo Erik and Karactermania for BTS 2021/2022 among others, will also support the ongoing development of the brand, capitalizing on Christmas promotions that will feature Dragon Ball in three of the most important retailers: FNAC, TRUS and El Corte Inglés.

Mafalda is about to turn 60 years old, and continues to be one of the agency’s main brands. In 2021 El Ocho signed agreements with Bacci, Alcampo, Carrefour, Easy Wear, Green Coast, Comic Studio, El Corte Inglés, Lefties, Women Secret, Cortefiel, Springfield, Zara, Salvi, and Sfera. El Ocho is working on its licensing program for 2022, currently negotiating deals with Pull and Bear and other key textile players.

One of the agency’s main brands. This license with a strong social media presence and an intergenerational target, will continue its success in 2022 with new releases in the editorial line, as well as a new action movie and animated series. In other categories, major textile companies such as Women Secret, Springfield, Cortefiel, and Lefties, among others, will also launch new collections in 2022.

MasterChef España is the most successful talent show on RTVE. With more than 800k followers on social networks, this property continues its success with a 10th season. Diset will capitalize on the Christmas campaign with the launch of an amazing new board game with the support of Educa, that will launch a line of play kitchens, and SG with a new home textile line.

Simon, one of the top series on leading preschool channel Clan, continues its success in the market. The current licensing portfolio covers several key categories such as a toy line with Educa, Cefa and Jugavi, BTS with Safta and publishing with Penguin Random House and Jacaranda. Ocho will continue its cross-platform marketing plan with other partners like master toy company Famosa which will be adding new products to their line.

El Ocho has strengthened the Bing toy line, which was successfully launched at retail in Spain by Famosa in 2020. For autumn/winter 2021, Famosa will launch the ‘Pretend & Play Doctor Bing’ toy, which comes with the same doctor accessories as in the series and encourages role-play. In addition to the toy line, Bing’s licensing program is being expanded with wheeled vehicles from Toimsa, bedding from Halantex, publishing from Penguin Random House, and cake decorations from Dekora.

Masha and the Bear

Masha is a YouTube phenomenon with over 100 billion views and 128 million subscribers, making it one of the top children’s entertainment brands in EMEA. In Portugal, it is the Nº1 show on Canal Panda since 2015 with Simba as its Master Toy partner. In addition, the brand has major partners such as Grupo Anaya (publishing), Lemon (live shows), Madhouse (Meet & Greets), Pez (Candy), Crocs (shoes), Havaianas (flip flops), Energizer (flashlight), Funiglobal (costumes), Angel Europa (stationery and mandalas), and Ataa cars (electric vehicles).

Produced by Big Bang Box Momonsters is one of the most successful series on Clan, and Clan’s Youtube channel with one million YT views. Bandai continues to invest in the license with new releases planned for the Christmas campaign and with a detailed transmedia marketing plan that will cover both online and offline projects. Panini has joined the licensing program with a publishing line (magazine in October 2021 and an album in 2022), along with a toy line that General de Juguetes will launch between Q1 & Q2 2022, and the current licensee portfolio that includes: Anaya (publishing), Adalberto (home clothing), Cefa (toys), Colorbaby (beach toys), CyP (collectables), Claudio Reig (musical instruments), and Toimsa (toy vehicles).

Currently airing in more than 150 countries, with 3 seasons of 52 episodes each. The series is broadcast by Clan TVE in Spain and is available on Netflix, Youtube and HBO. The Master Toy is Toy Plus and the toy range will be distributed by Bizak across Spain. Other partners include Panini, with books, album and “stick and stack”, Clementoni and Ravensburger, with puzzles, and Dolfin with chocolate eggs.

This license continues to be an unparalleled success on networks with over 3M fans and as the top entertainment IP on the Giphy platform. El Ocho remains committed to brand positioning by supporting CYP with its amazing line of accessories that will be available in El Corte Ingles this Christmas. New agreements have been signed with Tomy for soft lines and plush toys, and Panini for a sticker album launch.