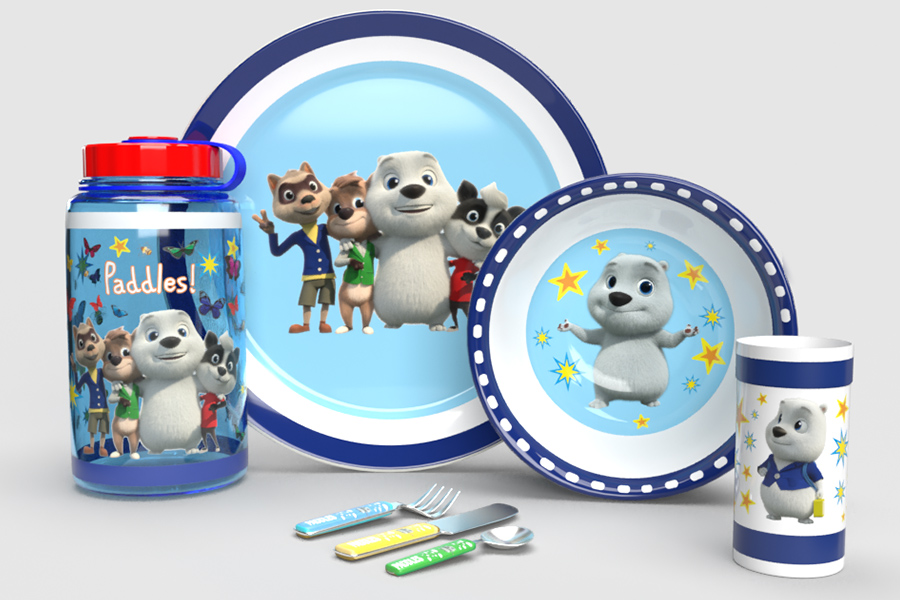 Plush, apparel and more to follow successful launch on Cartoonito UK and RTE

As its delightful new CGI show for four-to-seven-year-olds, Paddles, attracts a growing audience in both the UK and Ireland, state-of-the art animation and media company FuturumKids is looking forward to a busy Christmas for its e-commerce range of Paddles merchandise.

Paddles fans can look forward to ten SKUs including plush and apparel. Manufactured in Shanghai and distributed via fulfilment houses in Northampton, London and Dublin, these will be available to Paddles fans through the FuturumKids e-commerce portal well in time for the Christmas market.

Paddles, which appears in prime-time slots on Cartoonito UK and RTE, has already enjoyed a very positive response from viewers in the UK and Ireland. Paddles has also attracted a huge following on its social media outlets.

Not surprisingly, further broadcast expansion is expected over the coming months. Brand management company Monster Entertainment, which is handling global television sales for Paddles in all territories except Korea, is expecting to announce further territory deals in the coming weeks.

Paddles, a charming, exciting and very funny 52 x 11 series, tells the story of a polar bear cub accidentally delivered by the Stork to a frozen River Shannon in Ireland – and brought up by a pack of Irish wolfhounds. Through the adventures, mistakes and discoveries of its funny and huggable star, and his friends Bracken, Bridie and Fagan, the series shows its young audience that being different is something to be celebrated and enjoyed.

This is the latest stage in the broadcast and merchandising development of Paddles, whose makers include members of the team behind the seven-time Emmy-award-winning children’s series Jakers!

Both Futurum and Monster Entertainment will be sending a strong team to MIPCOM with the aim of building more broadcast alliances. Apart from expansion for Paddles, new FuturumKids projects including Ling Ling, the story of a wide-eyed panda newly arrived from Shanghai at Tavistock’s International School for Animals, London’s premier – and most eccentric – pre-school. Ling Ling is already in production.

Brendan Kelly, Head of Sales at FuturumKids, says: “We’ve been delighted by the response to Paddles in both the UK and Ireland. The wonderful characters, witty stories and stunning animation have clearly charmed a large number of four-to-seven-year-old viewers – and their parents. As the show’s reach continues to expand to new territories and new viewers, now is undoubtedly the right time to address growing demand for Paddle merchandise – and we’re ready!”