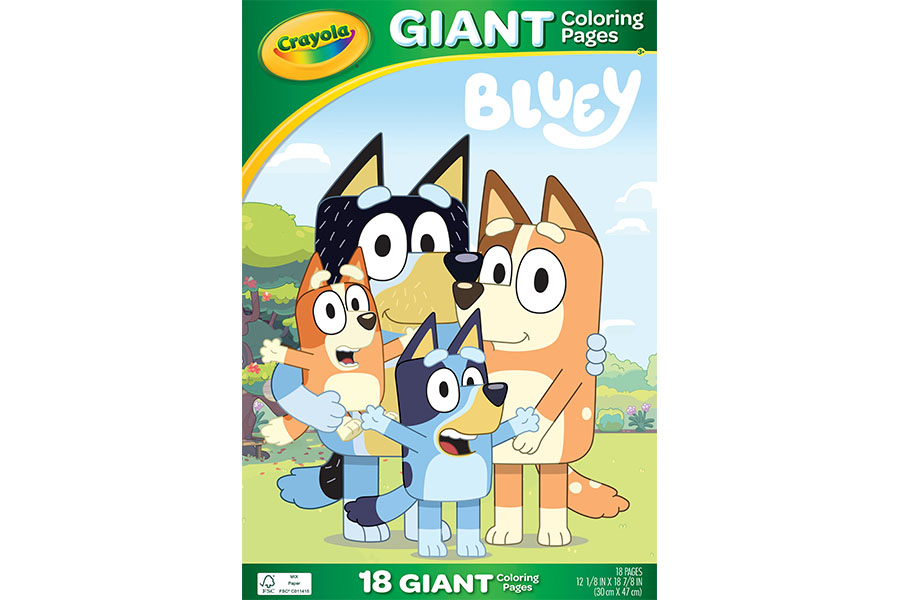 BBC Studios has agreed to a multi-territory licensing deal with Crayola for stationery, arts, crafts and coloring packs further expanding its global licensing portfolio for the multi-award-winning Bluey.

The first products to hit the shelves will be Giant Colouring Pages which will be available at Walmart in the US in time for the holiday season.

In addition to the US, the licensing deal covers Canada, Australia and New Zealand as well as the UK where the range will be available in January 2022.

Warren Schorr, Vice President, Business Development and Global Licensing, Crayola said: “Crayola has inspired artistic creativity in children for more than 100 years.  Our partnership with BBC Studios for Bluey colouring and activity products will showcase our mission.  We know that parents’ value creative and imaginative play, which we can enable and enhance by offering the best products with the best partners.”

Suzy Raia, Senior Vice President, Consumer Products and Business Development, BBC Studios – Americas, added: “This is a pivotal moment for our beloved preschool brand Bluey as we bring iconic brands like Crayola to an expanding portfolio of licensees that broaden the world of Bluey at retail. Crayola is a natural fit and extension of Bluey’s brand, promoting creativity and imaginative play for preschool children.  I know children and their parents will be delighted to see these brands come together.”

Bluey has won the hearts of kids and parents around the world since it first launched in Australia in October 2018 and has become a global hit.

In Australia, Bluey was the #1 children’s programme on metro broadcast television in 2020 and is the #1 series ever on ABC iview with over 480 million views across series one and two since its launch. In the UK, it was the most viewed show on CBeebies in August and is also available on Disney+. In the U.S., across Disney Junior and Disney Channel in Q2 2021, the show was the #1 most watched TV series with kids ages 2-5. The series ranked #1on Disney Junior in Canada for children 2-11, and #2 for children 2-5 in Spring 2021.

Bluey has also won multiple awards, such as the International Emmy® Kids Award in the prestigious Preschool Category in 2020, and its second AACTA Awards for Best Children’s Program that same year. The accolades continue in 2021, with Bluey winning four Kidscreen Awards in February.

The series follows Bluey, a six-year-old Blue Heeler dog who loves to play and turn everyday family life into extraordinary adventures that unfold in unpredictable and hilarious ways, bringing her family, friends and community into her world of fun.

Bluey is produced by multi-Emmy® award-winning Ludo Studio for ABC Kids Australia, co-commissioned by ABC Children’s and BBC Studios, and distributed internationally by BBC Studios outside of Australia.