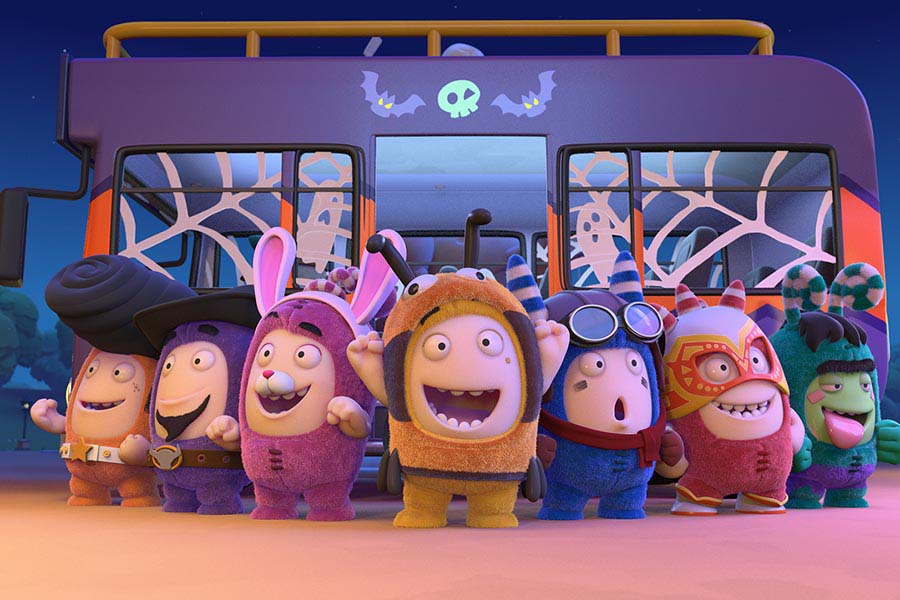 Tags from the story: Argos, Oddbods, One Animation.

Award-winning content creation, distribution and licensing studio One Animation is bringing Halloween-themed ‘retail-tainment’ to its partnership with UK retailer Argos with the launch of a brand-new Oddbods seasonal episode ‘Halloween Heroes’ (1 x 7’) exclusively via Argos.com – marking the first episode of a major animated series to debut with a retail partner.

Launching on Friday 1st October, the full-length episode sees the Oddbods attend a Halloween party at the local museum but when Newt accidentally breaks part of an exhibit a spooky curse is unleashed, bringing many of the artefacts to life! As the Oddbods scramble to fix what they’ve broken, the park is overwhelmed with all manner of ghostly guests.

The episode release coincides with the previously announced launch of exclusive Oddbods merchandise this autumn, spanning plush, apparel and dress-up at Argos and Sainsbury’s stores and online. The range includes Pogo and Fuse dress-up costumes from Rubies, Pogo and Fuse plush from Posh Paws and kids’ pyjamas from Misirli featuring all the Oddbods characters. Sainsbury’s Argos Buyer Daniella Parr commented: “We are really excited to have the retail exclusive on Oddbods dress up product launching for Halloween!”

Prior to the debut of ‘Halloween Heroes’, Argos is also sharing a brand-new Oddbods music video ‘Mahna Mahna’ on its website – a bespoke Oddbods cover version of Italian composer, Piero Umiliani’s famously catchy original song. The song launched on the Oddbods’ YouTube channel earlier this month and garnered around 2,000,000 views in its first week.

Sashim Parmanand, CEO at One Animation, said: “When bringing our partnership with Argos to life, a key focus was to create innovative, unique ‘retail-tainment’ experiences to engage Oddbods fans and help drive them into stores and online retail spaces. The launch of ‘Halloween Heroes’ gives fans exclusive access to an all-new episode, and also excitingly marks the first time an entertainment company or studio has ever debuted content via a retailer’s platform. We can’t wait to see fans reactions to the spooky new episode and to also give them a chance to dress-up as their favourite Oddbods characters for Halloween, birthday parties and beyond with the exclusive costume offering at Argos.”

Oddbods is a globally loved, three-time Emmy Award-nominated, non-dialogue comedy featuring seven adorable, highly unique pals. Together, despite their differences, they survive the perils of everyday life, unintentionally turning ordinary situations into unexpected, extraordinary, and always humorous events. The quirky, but totally charming, Oddbods celebrate individuality in a funny, warm and unexpected way. After all, there’s a little odd in everyone!