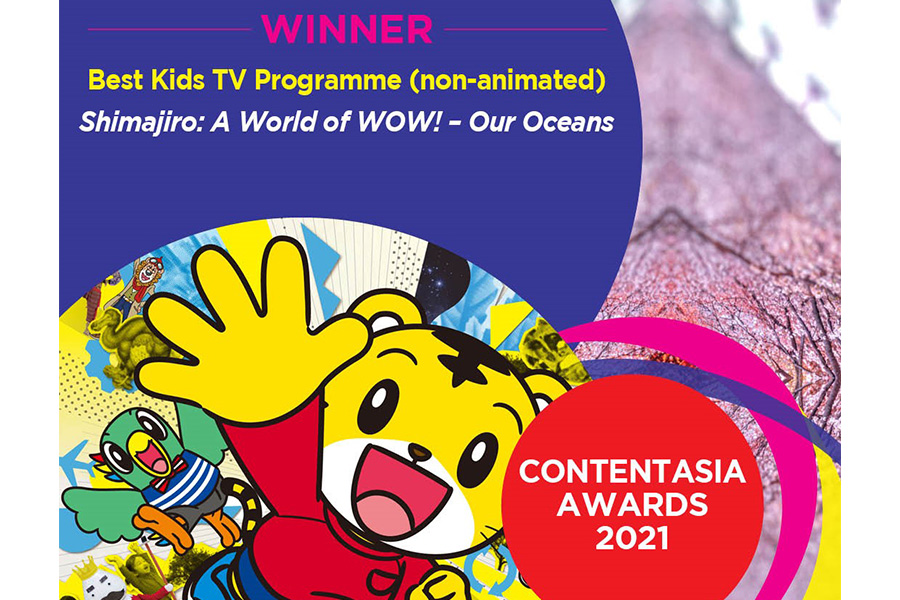 Tags from the story: Benesse Corporation, ContentAsia Awards, Shimajiro: A World of WOW!.

Shimajiro: A World of WOW! – Our Oceans is honoured at the 2021 ContentAsia Awards

Benesse Corporation, the Japanese education services company, and the name behind the enormously successful Kodomo Challenge preschool educational course and its star Shimajiro, has announced that an episode of the long-running series Shimajiro: A World of WOW! has been honoured at the 2021 ContentAsia Awards.

Shimajiro: A World of WOW! – Our Oceans explores the relationship between people and the ocean and explains why we need to protect oceans with the help of a fascinating cast of people including coral cultivators, divers and cargo transport ship captains. It also shows its young audience what they can do to help limit waste and pollution in the world’s oceans.

ContentAsia is an information platform curated by a highly experienced team to offer insights into Asia’s content environment. For 15 years it has covered topics that include entertainment content creation, funding, financing, licensing, distribution, design and branding, and technology across the Asia-Pacific region.

Shimajiro is a trusted brand that embodies both entertainment and educational qualities. In each episode of his long-running show, young Shimajiro learns skills that help him in his everyday life as a preschooler. He’s also a popular ambassador for a range of licensed children’s products in Asia.

The goals of Shimajiro: A World of WOW! are to motivate children to try out things for themselves; to help children develop diverse perspectives and imagination; and to show what adults convey to children when facing social issues. The series title includes the word WOW because Benesse wishes to deliver surprise, joy, and discovery.

Shimajiro has starred in his own show since 1993. It has evolved with the times from animated shorts to today’s thirty-minute hybrid format of animation and live-action broadcast now seen on multiple platforms across Asia.

Janine Stein, Editorial Director, ContentAsia, says: “Our judges responded very positively to ‘Shimajiro: A World of WOW!’, saying the mixed-media combination of puppet, animation and live action had high production values and worked well for the pre-schooler target audience as well as for families. The idea of bringing kids outdoors to enjoy nature was appreciated across the jury panel. One of our judges said the programme highlighted ‘an important and relevant topic for today’s pre-schoolers: the environment and understanding a few key areas about the ocean and keeping it clean’. They also commented on the execution, including appropriate pacing for pre-schoolers, relatable situations, and reinforcing the learning throughout the show, as well as effective presentation.”

Ms. Ai Aochi, producer, Shimajiro: A World of WOW!, says: “Our aim is to encourage children to enjoy this world and to know the importance of looking at things from a broad perspective – and  of course to entertain and delight them! We are thrilled that our efforts have received recognition from the highly respected ContentAsia platform at the 2021 ContentAsia Awards.”