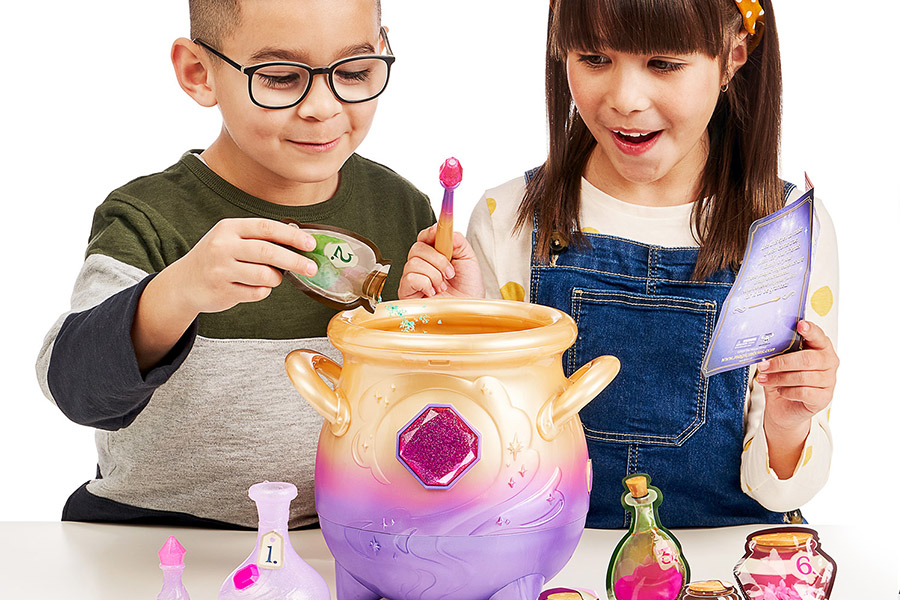 Following up on the massive successes of Squeakee the Balloon Dog and Gotta Go Flamingo last holiday, Moose once again delivers the season’s hottest toy

Moose Toys, an innovative leader in the toy industry, launched Magic Mixies Magic Cauldron, a first-of-its-kind interactive toy created to ignite imaginations by putting real magic into kids’ hands. The product is available for pre-sale online and available online and at retail locations nationwide, wherever toys are sold beginning Oct 1.

The cauldron comes with a spell book and everything else needed to mix a potion to create an interactive magical Mixie pet. Kids add water and are prompted by the cauldron to add a variety of mystical ingredients that foam, bubble and help create the Mixie, including sparkle for its eyes and a magic feather to give it wings. After all the ingredients are mixed into the potion, tap and wave the magic wand, say the magic words, MAGICUS MIXUS, and POOF! An enchanting mist rises above the cauldron then clears to reveal a – completely dry – Mixie creature that makes adorable sounds, lights up and interacts with the wand to help create endless spells. After revealing the Mixie, kids can continue the magic by making their own potions and recreate the mist with additional modes of play.

To celebrate this magical toy and help parents bring magic back to playtime, Moose is joining forces with Emmy® and Tony Award® winning actor and New York Times bestselling author of “The Magic Misfits,” Neil Patrick Harris, as its official magic ambassador to unveil Magic Mixies at Family Experience Company CAMP’s Columbus Circle store at the end of this month.

Neil Patrick Harris said, “Magic has been a passion for me since I was a child. Magic sparks imagination and allows for endless creativity, and it’s been important to me that my kids experience magic in their lives. Childhood is such a magical time, and the short window where kids believe that real magic exists is fleeting. I love that the Magic Mixies Magic Cauldron encourages kids to believe just a little longer. It puts the power in kids’ hands and delivers an incredibly cool experience where kids are actually creating the magic.”

“Magic Mixies is the hottest toy of the year. There is nothing like it. We have created something truly magical that lets kids see, touch and create real magic,” said Paul Solomon, co-owner, Moose Toys. “The excitement surrounding Magic Mixies has been phenomenal, it delivers the signature Moose Toys innovation and is sure to enchant kids around the world.”

Findings from a survey conducted by Moose Toys reveals Magic Mixies Magic Cauldron and its endless magical, imaginative play is needed by both kids and parents:

For all of the above, Magic Mixies Magic Cauldron does the trick.

Magic Mixies Magic Cauldron is $69.99 and includes everything needed for the big reveal as well as extra mystical accessories to keep the magic going. The Magic Mixies Cauldron Magical Mist and Spells Refill Pack is $9.99. The refill pack creates two new spells and 20+ misting moments, so kids can create magical mist again and again.