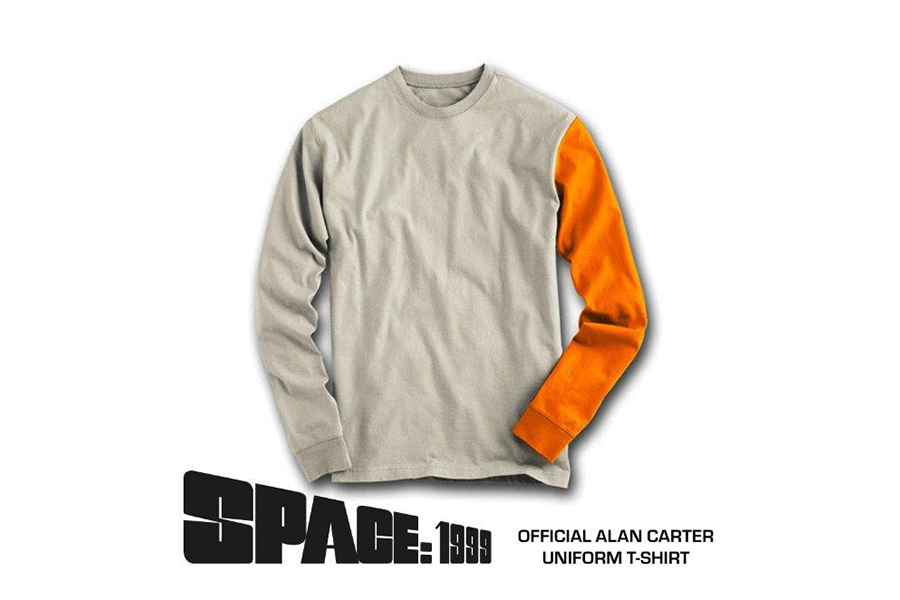 Anderson Entertainment, the company founded by Gerry Anderson – the man behind such iconic shows as Thunderbirds and Space:1999 as well as modern hits like Space Precinct and the 2005 reimagining of Captain Scarlet – has announced the arrival of a range of cosplay long-sleeve t-shirts inspired by the crew uniforms from the live action classic Space: 1999.

The Space: 1999 cosplay long-sleeve t-shirts are replicas of uniforms worn by the crew on Moonbase Alpha. All are designed to closely match the original outfits worn by the show’s cast. As in the show, the colours on the sleeves refer to the different ranks and characters in year one of the iconic 1970s Gerry Anderson series, beginning with black for John Koenig, leader of Moonbase Alpha, and orange for Alan Carter, chief pilot. These will be followed by red (Main Mission/Command Centre) and purple (security staff).

Made from 100 per cent cotton and using stitched sleeves rather than printing to create an authentic look, these are classic, comfortable designs for both dressing up and everyday wear that will appeal to fans of all ages.

Available in sizes small to 5XL for both men and women and retailing at £29.99 retail, the t-shirts will initially be sold exclusively through the Gerry Anderson store website.

This move into the cosplay category comes hard on the heels of a new agreement with rightsholder ITV Studios, which allows Anderson Entertainment to expand its ranges of product derived from its classic brands. This agreement will enable a wide range of new and innovative products inspired by the best-loved Gerry Anderson creations.

Writer, producer, director, and MD of Anderson Entertainment Jamie Anderson says: “Gerry Anderson fans have been asking whether the stylish Space: 1999 look will be made available to wear for a long time. Well, the first-ever t-shirts in the classic style of the hit show’s uniforms are now on sale, with more designs on the way. We’re delighted with these designs – and we think the massive Gerry Anderson fanbase will be too.”