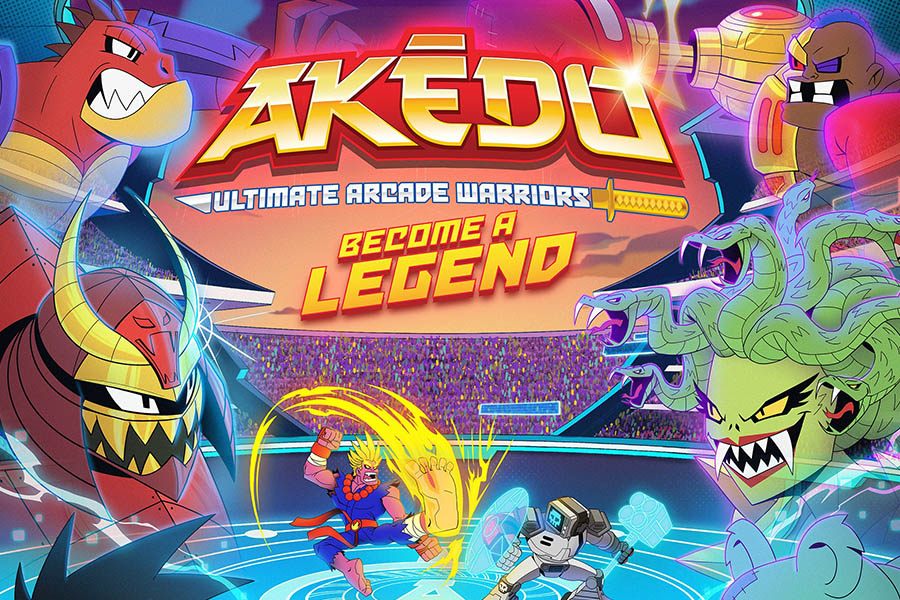 From triple-threat toy to triple-threat partnerships, leading toy innovator teams with two leaders in kids’ and family entertainment, WildBrain and Nickelodeon, for knockout marketing campaign around its biggest boys’ brand launch to date

Moose Toys is poised to deliver a one-two-three knockout punch this summer with the launch of Akedo – Ultimate Arcade Warriors, the first brand to combine realistic battling action figures at a micro-collectible scale. Akedo marks the innovative toymaker’s biggest boys’ launch to date and will be backed by a full-scale marketing campaign. The campaign kicks off today with the release of a trailer for a brand new animated series, produced in partnership with WildBrain’s premium kids and family AVOD network, WildBrain Spark. Additionally, leading agency, WildBrain CPLG will manage the licensing program. Delivering the third punch to the unprecedented marketing effort by the toy maker is Nickelodeon, the number one entertainment brand for kids, with The Akedo Super Ultimate Ultimate Tournament, a branded programming video showcasing an exclusive bracket-style tournament that fans can watch on Nickelodeon’s YouTube Channel.

Derived from the Japanese word for arcade, Akedo has a retro gaming look and combines it with kids battling one-on-one with 39 unique warriors including ninjas, robots, gladiators and Vikings, alongside teddy bears, a dinosaur and clowns, using skill and strategy to claim victory over their equally well-equipped opponents.

Building excitement for the action-packed game play of Akedo, Moose is making its largest ever investment in content with WildBrain. Moose also is partnering with Nickelodeon to create a branded “as live” event ― The Akedo Super Ultimate Ultimate Tournament ― on Nickelodeon’s YouTube channel which garners over 50 million views each month.

To create full franchise opportunities for the innovative new brand, Moose created a launch program to reach consumers in multiple facets of fandom. Moose and WildBrain Spark are co-producing a dynamic new animated series bringing the world of Akedo to life. The action-packed series trailer can be viewed on the MooseTube Mania YouTube channel, a mini movie will premiere on July 2 and full episodes will roll out shortly thereafter. Episodes also can be viewed on Amazon Prime Video Direct. In Canada, WildBrain also will debut the new Akedo series on its leading television network beginning this fall. Alongside the robust content offering, Moose also has partnered with WildBrain CPLG, to manage a global licensing program for the Akedo brand across all categories to follow the toys’ launch. WildBrain will handle global distribution for the new series.

The micro battling figures pack a punch with their individual battle styles and an array of attached aspirational, powerful and sometimes unconventional weapons and accessories, including ninjas with swords, a teddy bear with a chainsaw and a big baby ruling with his gavel. Action-packed gameplay is created by figures that are attached to iconic individual coin bases that are reminiscent of arcade play. Using the included controller, figures deliver a unique split strike action that literally splits the other Akedo figure in half. Players’ skill and strategy increase as they move through the collection of 39 warriors, including Classic, Epic, Ultra Rare, Legendary, Exclusive Ultra Rare and the very Limited Edition Mythical Stormstrike, a glow-in-the-dark Viking.

For the ultimate battle experience, players can match up in the 90s retro style Ultimate Battle Arena, a playset that emulates an old-school arcade game complete with its own theme song. The arena comes with two exclusive Ultra Rare warriors, Turbo Chux and Screen Shot, both with double battle accessories. Included are two interchangeable backdrops, two deluxe controllers and detachable training punching bag. Adding excitement, and a bit of humor, to the battles, the arena plays more than 35 real battle sound effects.

“Our success in the boys’ aisle with the Treasure X and Heroes of Goo Jit Zu lines established Moose as a toy super innovator in the category. We are pulling out all of the stops with the Akedo launch. Combining our expertise in collectibles, WildBrain’s cutting edge approach to content and licensing and Nickelodeon’s ability to create on-trend interactive events for its highly engaged and loyal audience, Akedo is positioned to deliver a knock-out hit. It’s the most dynamic battling toy ever, and with deep collectability and engaging entertainment, we are delivering a fully-rounded experience that meets kids where they are,” said Ronnie Frankowski, chief marketing officer, Moose Toys. “It’s a bold move that is consistent with Moose WOW innovation. Akedo is the next global boys’ action franchise mega hit.”

With Akedo, Moose is building upon its already impressive history with collectibles, popularizing and consistently demonstrating strength in category for boys and girls. Specifically, Heroes of Goo Jit Zu Single Figure Assortment was recognized as the No. 1 non-licensed Action Figure Item for 2020 and for Year to Date 2021, according to The NPD Group*. Additionally, the four episodes of Goo Jit Zu digital content created and distributed to support the product garnered 100 million views.

Rachel Taylor, commercial director, WildBrain Spark, added: “Having successfully managed Moose’s YouTube strategy for a number of years at WildBrain Spark, we know just how incredibly engaged kids are with their content online. As more and more kids’ brands move to digital-first launch strategies, it’s a natural step to extend our Moose partnership across WildBrain’s integrated offering of production, distribution and licensing for the amazing new Akedo franchise. Moose has an excellent track record of delivering toys kids love, and we’re confident Akedo is going to be a big hit both on and off screen.”

“Working with Nickelodeon we’ve created an action-packed interactive component to the product launch, The Akedo Super Ultimate Ultimate Tournament, that literally brings to life the Akedo experience in a way no other partner could,” said Frankowski. “Moose has had a long-standing relationship with Nickelodeon, but this is the first time we’ve partnered with them for a branded “as live” event. Tapping into Nickelodeon’s group of top-level influencers to introduce kids to Akedo and this absolute next level game play will be entertaining as well as demonstrate how the game is played by enthusiasts that kids can relate to.”

“Through this collaboration with Moose Toys, Nickelodeon continues to push the envelope by creating innovative content and experiences that appeal to fans of all ages,” said April L. McKenzie, Vice President, Kids & Family Activation, Velocity, ViacomCBS. “The Akedo Super Ultimate Ultimate Tournament not only spotlights the exciting launch of this new action-based toy, but also offers kids and families an opportunity to be at the center of the action.”

The Akedo Super Ultimate Ultimate Tournament will tap the power of Nickelodeon’s 35 million social reach, and enlist its talent and influencers to reach kids and parents. The event will match up 16 competitors made up of kids and top influencers in an exclusive bracket-style tournament, with each competitor battling for their warrior to win the title and become the Ultimate Akedo Champion. Leading up to the event, beginning Aug. 8, influencers including Ninja Kidz, Onyx Kids, Kyle’s Toys & Games and Ohana Boys will be sharing content that showcases how they are training for battle. On Aug. 15, the event goes live on Nickelodeon’s YouTube channel hosted by digital creator and YouTube star Nathan from Unspeakable calling the action through Aug. 21. Catch it after Aug. 21 on Moose’s YouTube channel, MooseTube Mania.

Akedo will launch on Walmart.com and Amazon in July and in stores at all major retailers in August.