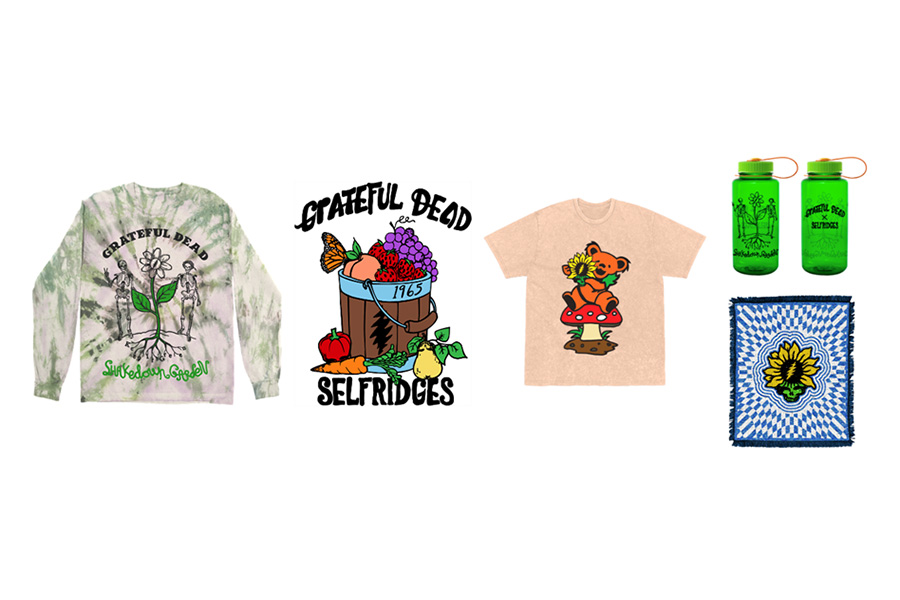 Grateful Dead, the band behind the social and musical phenomenon, counterculture, and Dead Head fandom, release an exclusive capsule merchandise collection ‘Shakedown Garden’ with Selfridges as part of their summer creative concept ‘The Selfridges Garden Centre’.

Taking inspiration from the band’s tenth studio album ‘Shakedown Street’ and the recent rise in the popularity of gardening amongst consumers, the playfully named ‘Shakedown Garden’ collection gives the classic Grateful Dead aesthetic of tie-dye, skulls, bears and roses a botanical spin. Drawing upon designs from Grateful Dead’s classic imagery archive, and communicating the importance of sustainability to the band, the 16-piece range features apparel that uses organic blanks and vegan inks for any print work, debuting new artwork and exclusive designs for both dedicated Dead Heads and those after their latest fashion fix.

Evoking memories of the Summer of Love and psychedelia, the colourful unisex collection features t-shirts, hoodies, sweats, a knitted blanket, cap, mug, and an eco water bottle, plus a flowerpot and gardening gloves for those with green fingers.

“The Grateful Dead played England more than 20 times, with 20 shows in London alone, along with a few other shows around the UK throughout their performing career,” says David Lemieux, Grateful Dead Archivist and Legacy Manager. “Their first show outside of North America, more than 50 years ago in May 1970, was in Newcastle-Under-Lyme, and over the next 20 years they played some of their best live performances in England, including bona fide classics in 1972 and 1974. It’s a thrill to have the Grateful Dead with such a prominent presence in Selfridges. A retail institution with more than 100 of history is the perfect fit for the Grateful Dead, with their more than 55 years of cultural and musical history, and we’re all thrilled to be bringing the ‘Shakedown Garden’ collection to Selfridges.”

To celebrate the launch of ‘Shakedown Garden’, a special episode of ‘The Good Ol’ Grateful Dead Podcast’ has just launched, dedicated to the band’s history in the UK with several special guests including noted UK Dead Head Alex Allen and MOJO editor John Mulvey. Click HERE to listen to the episode ‘Over There: The Dead In England’ now.

Available from 21st June in conjunction with Warner Music Artist Services, the Grateful Dead X Selfridges ‘Shakedown Garden’ collection os available in store at Selfridges London and Manchester, and Selfridges.com, with prices starting at £25. At Selfridges London the Accessories Hall and store exterior is being transformed into the Garden Centre, a playful and sensory response to the boom in outdoor appreciation, as part of Good Nature, Selfridges’ creative theme for 2021. The Grateful Dead X Selfridges ‘Shakedown Garden’ collection will feature alongside gardening products, and a curation of fashion, lifestyle and beauty products, as well as other exclusive collections from brands including Prada and Ganni.

← THE NEW LIMITED EDITION MOOMIN'S DAY 2021 MUG PORTRAYS THE FIRST DAY OF SPRING WHERE'S WALLY? THE HUNT IS ON WITH FIZZ CREATIONS →