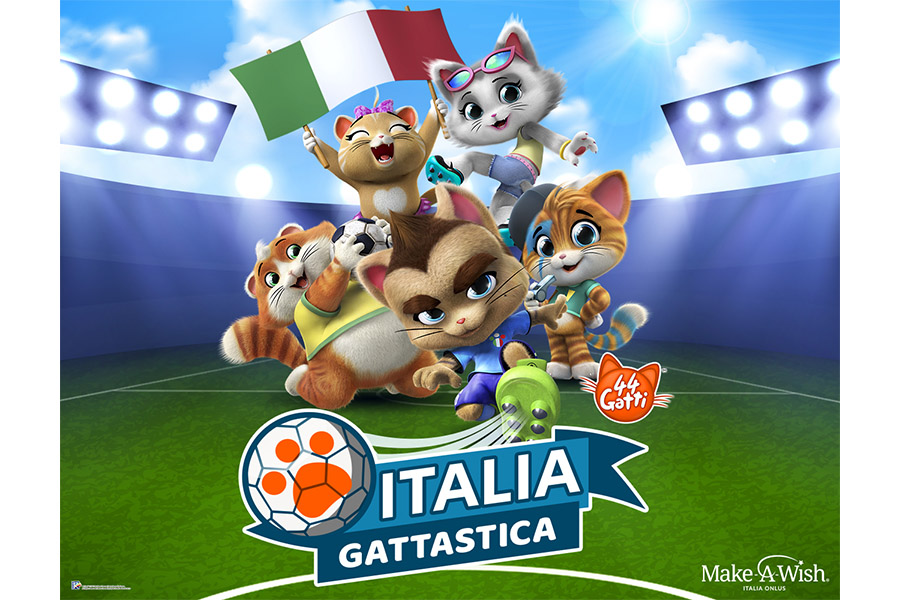 The UEFA European Football Championship is around the corner and families’ most loved cats have a surprise for all children.

Already big fans of sports and challenges, the Buffycats will be glued to the screen to cheer on the Italian team – with a special thought for children in need. To help them in their new mission they called Marco Verratti, ready to morph into feline champ Gatto Marco.

Gatto Marco will join Lampo, Milady, Pilou and Meatball on a uniquely customized Italian flag dedicated to the sport event. The revenues from the sale of the limited edition Italian flag, available on Rainbow Amazon Store, will be donated to Make-A-Wish Italia Onlus, the charity that makes the wishes of seriously ill children come true (www.makeawish.it).

“I’m really happy to kick off this project. The day I was asked to join this adventure my thoughts immediately turned to my children, who are huge 44 Cats fans,” said Marco Verratti. “It was fun and stimulating to work with serious and very professional companies like Rainbow and Vanquish. Now I hope that the little fans of Buffycats and now also of Gatto Marco will like it, because during the next European Championships we will need the support and cheer of everyone. Go Azzurri! Go 44 Cats!”

And there is more: plenty of new content, contests and special activities will be entertaining all fans during the European Championship on 44 Cats social networks.

Produced by Rainbow in collaboration with Antoniano and Rai Ragazzi, 44 Cats is an animated hit series that has been conquering fans worldwide. The made-in-Italy preschool classic is an explosive mix of action, comedy, friendship and great original music, now a global phenomenon with record ratings since its debut in November 2018 on Rai Yoyo, where it is the leading show. 44 Cats is on air in over 100 countries and in more than 20 languages, and has conquered the major kids networks with amazing results. Curating the magnificent soundtrack of the series are the original songs sung by Antoniano, Italy’s most famous Piccolo Coro.