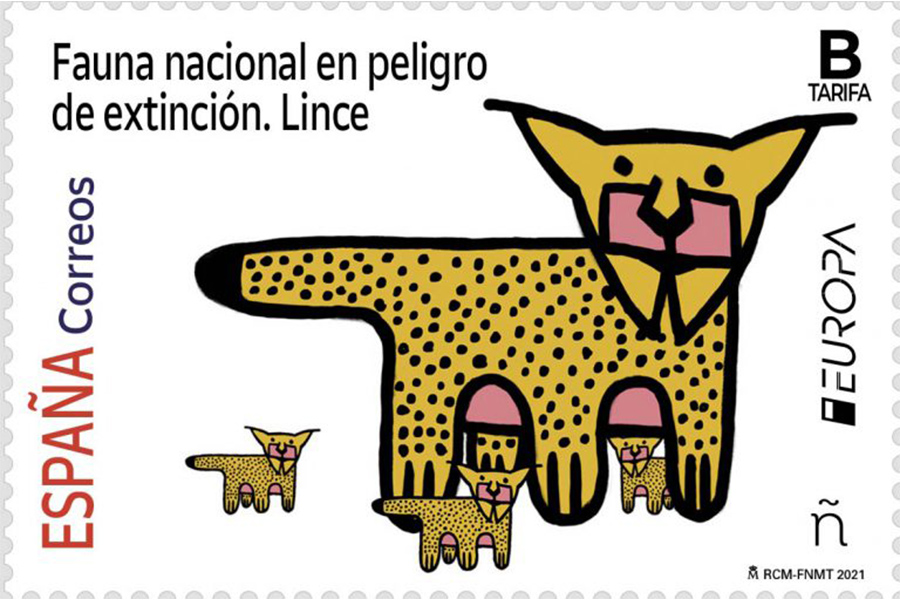 Jaime is a person with Autism Spectrum Disorder, he has communication and sociability problems, but he is also free to see things differently and show us the world from his perspective. He is a singular and unique artist. He has always liked drawing and this is his way of expressing himself. Jaime’s drawings reflect animals that live in freedom, such as gorillas, zebras, whales, and rhinos, and are the common thread of a narrative that makes up Jaime’s creative universe. For the postage stamp Jaime made a drawing of four lynxes of different sizes with strokes and colors that remind us of this very special animal.

The Europa series is one of the most iconic in the philatelic world. All the countries of Europe participate in this series. Each member presents a stamp with its own design and a common theme. This year, the stamps are dedicated to endangered fauna. Spain has chosen one of the most emblematic animals of the Peninsula, the Iberian lynx, as the main motif. The lynx was declared a protected species in 1966 and is considered the most endangered feline in the world.

Algo de Jaime is a business project that starts from Jaime’s capabilities and aspires to be his job, allowing him to have a future in a normalized environment. It was born with a very special purpose: to serve as a window for the art of Jaime, a young man with autism who, since he was a child, has shown an outstanding talent for drawing.

The brand is managed by El Ocho licenses and promotions since 2018. The drawings of Algo de Jaime have been licensed by large companies such as El Corte Ingles, Zara, Tantanfan, Safta, Apli, among many others and a part of these benefits are allocated to support the Aucavi Foundation.