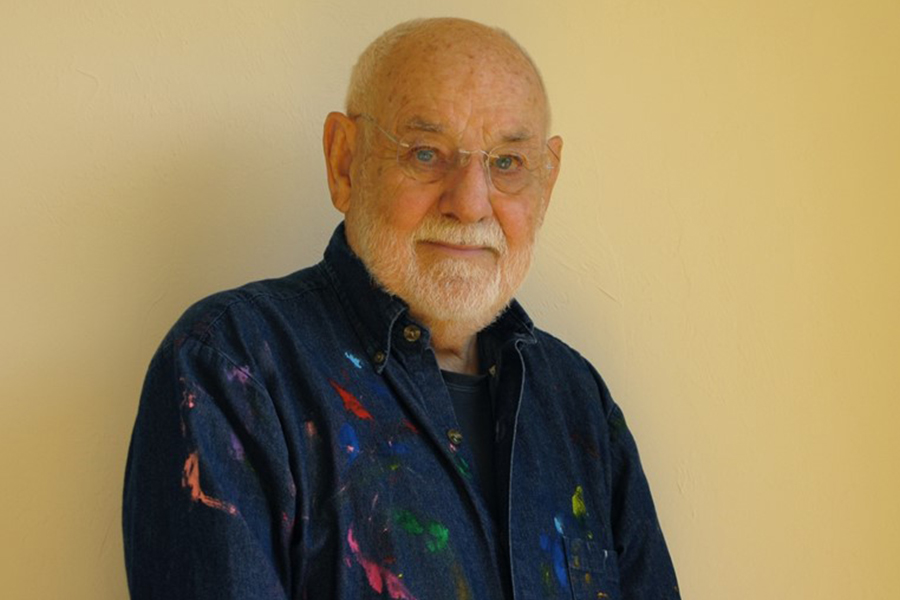 Tags from the story: Eric Carle.

The Carle family announced with great sadness that Eric Carle, passed away peacefully and surrounded by family members on May 23, 2021

The Carle family announced with great sadness that Eric Carle, beloved artist, illustrator, and writer, passed away peacefully and surrounded by family members on May 23, 2021 at his summer studio in Northampton, Massachusetts. Eric was 91.

A true creator, Eric Carle is renowned for his multi-dimensional practice, spanning a large body of fine art works in collage, painting, works on paper and fabric, and sculpture; theater and furniture design; and the stories he envisioned in over 70 brilliantly illustrated and designed children’s picture books. The books Eric created across more than 60 decades have sold over 170 million copies and include timeless classics such as Do You Want to Be My Friend? (1971), The Grouchy Ladybug (1977), Papa, Please Get the Moon for Me (1986), “Slowly, Slowly, Slowly,” said the Sloth (2002), The Very Clumsy Cricket (2017), and so many more. His best-known work, The Very Hungry Caterpillar, has been translated into over 70 languages (including Mongolian) and shared around the world since its publication in 1969.

Drawing on his formal training and ongoing practice as an artist (which Eric fondly referred to as his “art art”), Eric quickly developed a distinctive, personal style that he continued to explore and refine in his books, illustrations, and fine art. Numerous artistic influences came together in Eric’s creative output. His art took root in the long tradition of collage, an artistic technique tracing back to the 1900s Dadaist movement, combined with his hand-painted, colorful, and textured tissue papers, which recall the work of abstract artists associated with the Academy of Fine Art Stuttgart (the so-called Stuttgart avantgardists), from where he earned his fine art degree.

Eric’s prolific career as a picture book illustrator began by chance in 1967 when author Bill Martin Jr, while in a doctor’s office waiting room, saw a medical advertisement in a medical journal for antihistamines with an illustration Eric had done of a big red lobster. Soon after, Martin invited him to illustrate Brown Bear, Brown Bear, What Do You See? and the experience sparked his interest in creating his own stories, combining his artistic abilities with his experience in the field of printing.

His first original, 1,2,3 to the Zoo, was published the very same year. The book was published by Philomel Books, an imprint of Penguin Young Readers, and edited by the late Ann Beneduce, who Eric has always credited the success of his early works. They would go on to work together for the next fifty years.

Eric’s career as a creator extended far beyond his beloved children’s books—his independent artwork (or “art art”) is the root of his deeply individual style, reflecting a sense of whimsy, unfettered creativity, and calculated spontaneity. Utilizing materials such as aluminum, silk, glass, including scraps, and objects found in his studio, Eric amassed an extensive body of visual artworks throughout his lifetime including abstract collages, glass sculptures, and works on paper. Part of Eric’s early training as an artist was to treat all the arts, commercial or otherwise, with the same dedication, the same passion, and the same respect.

Eric was a true artist until the end—creating drawings as recently as this spring. Eric’s last drawing series, created in his final years, include several with “50 cents” written onto the image. When asked about this choice, he said that “children should know they too can sell their artwork.” A child at heart, the secret to Eric’s incredible legacy as a creator of picture books lay in his intuitive understanding of young minds—their feelings and their inquisitiveness, their creativity, and their intellectual growth. Besides being beautiful and entertaining, his books always offer children the opportunity to learn something about the world around them and encourage them to engage as artists themselves.

It was in this spirit that Eric and his wife Bobbie Carle (1938­-2015) co-founded The Eric Carle Museum of Picture Book Art in Amherst, Massachusetts in 2002. The Carles envisioned the museum as “a place for young visitors’ very first visit to a museum”, preparing them to develop the habits of museum going and discovery. The first major museum in the country dedicated to picture book art, it is a champion for illustrated children’s literature, collecting and exhibiting original illustration, and encouraging guests of all ages to read and create art. In summer 2020, The Eric Carle Museum of Picture Book Art presented Eric Carle’s Angels: An Homage to Paul Klee, an exhibition of 20 abstract assemblages dedicated to artist Paul Klee (1879-1940), who created over 70 drawings and paintings of angels during his lifetime. Eric’s singular, bold, three-dimensional “Angels”, created from painted cardboard and found objects, are a testament to the expressive power of collage in the hands of a master. His wishes for this series were that they never be conserved instead, he asked they be allowed to naturally disintegrate. The series represents a small but notable period of Eric’s extensive work in visual art.

Eric was born is Syracuse, New York on June 25th, 1929, and at the age of six moved with his parents Johanna and Erich Carle, both German immigrants, back to their hometown of Stuttgart, Germany. After graduating in 1950 from the prestigious Academy of Fine Arts Stuttgart (Akademie der bildenden Künste), he fulfilled his dream to return to America—the place of his happiest childhood memories. In 1952, with a portfolio in hand and $40 in his pocket, he arrived in New York City. With the help of the illustrator and art director Leo Lionni, who would go on to become a mentor, Eric landed a job as a graphic designer at The New York Times. He was drafted into the U.S. Army during the Korean War; after discharge he returned to his job with The New York Times and later he became an art director of a medical advertising agency, L.W. Frolich. Eventually, he was promoted to oversee International Hiring, recruiting art directors for the agency’s international offices (London, Mexico City, and Frankfurt), a job that took him away from designing himself. He soon left and began a career as a freelancer designing book jackets, album covers, and eventually children’s books.

Eric is survived by his two children from his first marriage to Dorothea Carle (née Dorothea Wohlenberg), Rolf Carle and Cirsten Carle, and Rolf’s wife Teresa Toro; his sister Christa Bareis, and his sister-in-law Rita Wiseman. Eric was preceded in death by his wife of 42 years Barbara ‘Bobbie’ Carle (1938-2015). Eric was a resident of Key Largo, Florida, where he and Bobbie lived since 2004.

An artist till the end, Eric continued to create art until early May 2021. Some of his latest works on paper can be seen here.

Online condolences, memories, and photos may be shared with the Carle family at: https://www.ericcarle.art/