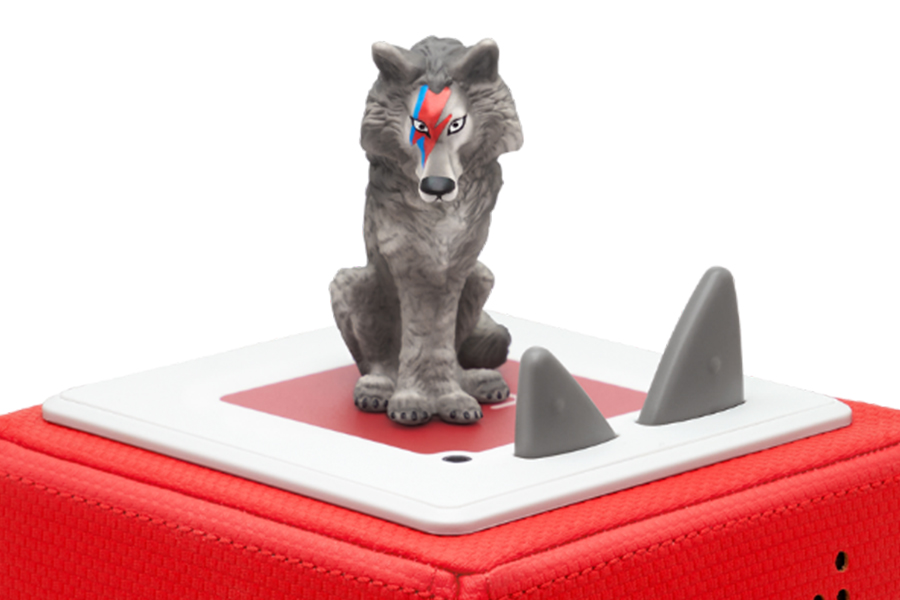 Children’s audio system, tonies®, has announced the launch of its new Peter & The Wolf / Carnival of the Animals Tonie. Narrated by the legendary David Bowie and recorded in 1978, this classical music Tonie will take children on a musical adventure and will be available from 9th June, adding to tonies’® extensive range of stories, music and educational content.

Introducing children to one of the greatest creations of humankind, classical music, the new Peter & The Wolf / Carnival of the Animals Tonie plays a beautiful symphonic fairy tale. Pop icon, David Bowie, tells the children’s story of Peter and the Wolf while the Philadelphia Orchestra brings it to life. A combination of music and storytelling on this double bill, that also includes Camille Saint-Saëns’ Carnival of the Animals, will delight children and parents alike.

Sergei Prokofiev, the Russian composer, pianist, and conductor, wrote the musical composition of Peter and the Wolf in 1936 to introduce children to orchestra. Each animal and character within the story is represented by different instruments, with Peter conveyed in the narration by the strings whilst the wolf is represented by the French horn.

Now, more than ever before, parents are searching for alternative ways to entertain, educate and inspire their children. The new Tonie will spark children’s imagination with its immersive content and is totally screen-free.

As well as encouraging independent play, this new classical music Tonie ignites all areas of child development. Exposing children to music during early development helps them to learn the sounds of words and improve literacy skills. Research conducted by music charity, the Apollo Music Projects, found that classical music has a direct impact on children’s listening and concentration skills whilst also evoking positive feelings. Helping to create a sense of relaxation and calm, classical music can have a positive impact on a child’s emotional wellbeing.

Tim Schumacher, Head of Sony Classical comments, ‘We are so excited to see this wonderful music narrated by David Bowie in 1978, specifically composed and recorded to give children easy access to the world of classical music and help them enjoy it, being released by tonies®.

To us at Sony, it seems like the perfect fit: a beautiful musical adventure and tales created for children to be enjoyed on an audio player which was also created just for children.’

Pinky Laing, UK Partnerships at tonies® comments: ‘tonies® is committed to helping children through the power and magic of storytelling and music. We are delighted to be releasing our new classical music Tonie that tells the story of Peter and the Wolf and plays the beautiful symphonies by the Philadelphia Orchestra and Camille Saint-Saëns’ Carnival of the Animals.

Music has been proven to help development with children in their early years. Classical music in particular helps to promote a sense of calm and relaxation, which is all so important for young children today. With the launch of our new Tonie we are continuing our commitment to engage young minds, support the wellbeing of children and help the next generation to learn and develop.’

In addition to the new classical music Peter & The Wolf / Carnival of the Animals Tonie that will be available on 9th June, tonies® is also releasing two new Tonies, telling contemporary tales, this month.

The two new additions include:

In Monstropolis, best friends Sulley and Mike run the largest scare factory in the monster world and Sully is one of its top scarers. Filled with a selection of songs and stories from the infamous Monsters Inc Disney – Pixar movie.

Join Frog and his friends as they figure out the rules of sitting through the power of rhyme. Jam-packed with silliness, animals and read by comedian David Mitchell, each story will have children and adults roaring with laughter.

The new Tonies are available from selected toy retailers, bookshops and via the tonies® website www.tonies.com, RRP £14.99.

There are two types of Tonies available:

The Tonies and Tonieboxes operate through a wireless digital system which connects to an NFC chip within each Tonie using Wi-Fi. Each Tonie is beautifully hand painted, making them desirable and collectable for kids.