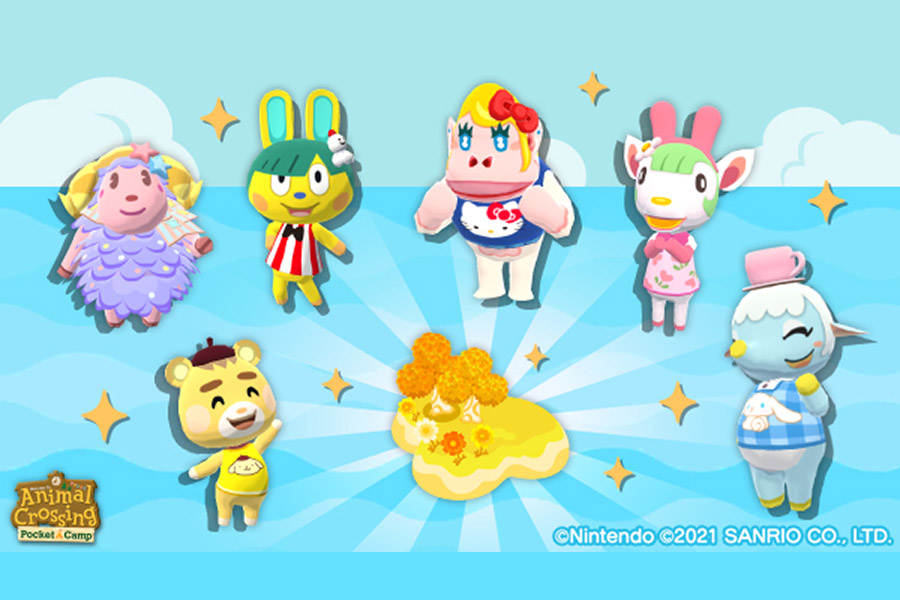 You can catch a glimpse of the collaboration residents, furniture and fashion items in the Get ready for a Sanrio crossover! trailer.

After updating the game to the latest version, players will be able to tap the Sanrio amiibo cards to their Nintendo Switch to unlock exclusive posters to order in-game, along with furniture and fashion items inspired by the Hello Kitty, Pompompurin, Cinnamonroll, My Melody, Little Twin Stars and Kerokerokeroppi series. Players can use these items to dress up and decorate their island to the theme of their favourite Sanrio characters. Six exclusive residents matching these various themes can be invited to the player’s campsite and can move to the player’s island.

These residents can also be invited to Harvey’s island for a photo shoot session.

Sanrio is also bringing back the friendship, kindness and cuteness of its characters to the Animal Crossing: Pocket Camp mobile game. Beginning 26th March at 07:59 CET through 10th May at 07:00 CEST, the Sanrio Characters Collection 2021 in-game event will bring Sanrio character- themed items to players’ campsite.

Fans can look forward to even more Sanrio character-themed content to collect in Animal Crossing: Pocket Camp between 26th March and 10th May, including the return of cute rewards from the first Sanrio Characters Collection in-game event in 2019, featuring characters such as Hello Kitty, My Melody, Little Twin Stars, Kerokerokeroppi, Cinnamoroll and Pompompurin.

Animal Crossing: New Horizons is welcoming Sanrio character-themed items and residents with the Animal Crossing Sanrio Collaboration Pack. The amiibo cards feature exclusive posters, themed furniture and clothing items. Six unique residents can be invited to the players’ island and settle in – or get their portrait taken at Harvey’s island. Additionally, Animal Crossing: Pocket Camp will feature a time-limited in-game event including Sanrio character-themed items as well as more themed content to collect.

← MONDO TV IBEROAMERICA TO DISTRIBUTE NINA & OLGA IN SPANISH-SPEAKING TERRITORIES MY LITTLE PONY IS BACK: A NEW MOVIE & TV SERIES EXCLUSIVELY ON NETFLIX →