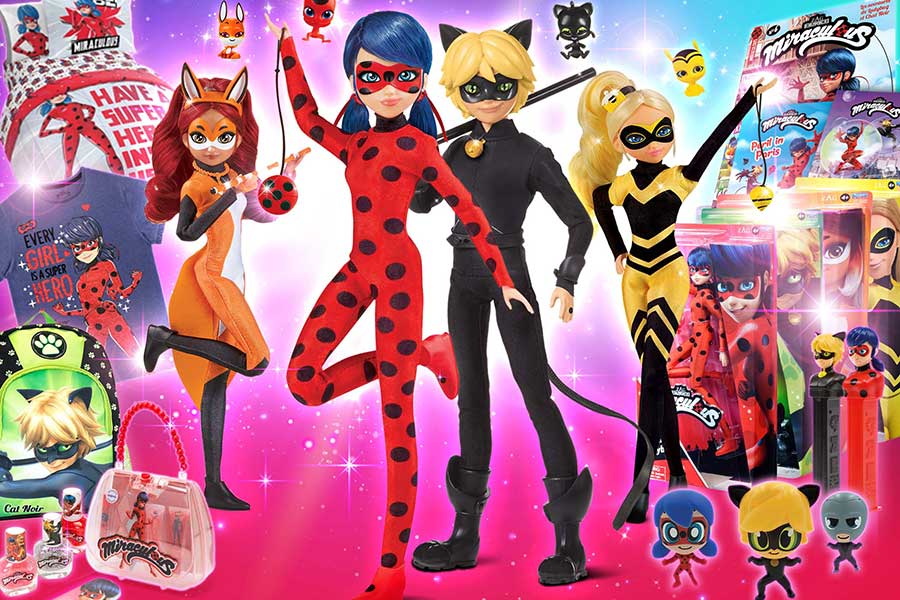 DEMAND FOR MIRACULOUS™ – TALES OF LADYBUG & CAT NOIR SKYROCKETS IN THE U.S. WITH NEW CONSUMER PRODUCTS PARTNERS ON BOARD, SEASONS FOUR AND FIVE OF THE SERIES COMING TO DISNEY CHANNEL U.S.

Consumer demand for the globally renowned series Miraculous™ – Tales of Ladybug & Cat Noir continues to grow in the U.S., with ZAG signing several new top-tier consumer products partners for the brand; and Disney Channel U.S. acquiring seasons four and five of the series.

Newly signed consumer products partners include Crayola for branded color/activity books; Fast Forward for kids backpacks and lunch totes; Kid Designs for youth electronics including headphones and microphones; Komar Kids for sleepwear; Peachtree Playthings for crafts and activities; Galerie for seasonal and everyday chocolate and candy; Inkology for innovative stationery and activity products; Trends International for posters and stickers; and Card.com for branded debit and credit cards.  Additional partners for online retail sales are Mighty Mojo Toys for party goods and supplies and All About Vibe for sublimated pillows.

Additionally, Disney Channel U.S. has confirmed pick up of the latest two seasons, joining Disney Channels in multiple territories around the world as previously announced.  The U.S. broadcaster will be debuting season four in summer 2021.  Last year’s TV Event, Miraculous™ World: New York, United HeroeZ, which premiered on September 25, ranked #1 for the channel for the week across all cable TV with Girls 6 – 11; and #1 across all TV in its timeslot in the same demographic.

Miraculous™ – Tales of Ladybug & Cat Noir is also available globally on Netflix (excluding Asia and Brazil), with Netflix U.S. streaming seasons one through three.  According to Parrot Analytics, Miraculous is the #1 in demand show for kids on Netflix in the U.S. for the period January 1 to February 28.

“We’re thankful to all of our partners, including our trusted broadcasters and streamers who make Miraculous easily accessible to our passionate fans, and our consumer products licensees and retailers who provide multiple ways for fans to engage with the brand,” commented Jeremy Zag, Founder, ZAG.  “The new Miraculous toy line from Playmates Toys and ZAG Labs that launched on March 21 sold out within hours at Target.com, Walmart.com, and Kohls.com, and we have many new initiatives in the works that we’ll be announcing in the coming weeks and months and cannot wait to be able to share the news.”

The new agreements coincide with the March 21 Miraculous toy launch from Playmates Toys and ZAG Labs at Walmart.com, Target.com, Kohls.com, with Amazon.com launching on April 15.  Other products hitting retail shelves this year include leveled readers and chapter books from Little, Brown Books for Young Readers (LBYR), a division of the Hachette Book Group; costumes and accessories for wholesale retailers from InSpirit Designs, a division of lifestyle retailer Spencer Spirit Holdings that owns and operates Spencer’s and Spirit Halloween (Miraculous is the company’s #1 girls costume at their owned and operated retail locations); bedding and décor from Jay Franco; underwear from Handcraft Manufacturing; and Bentex Apparel Group for sportswear, tees and sleepwear.

Also coming up in 2021 is the theatrical US$100M+ movie, Miraculous Ladybug And Cat Noir ‘The Awakening,’ which begins to roll out holiday 2021 and spring 2022.