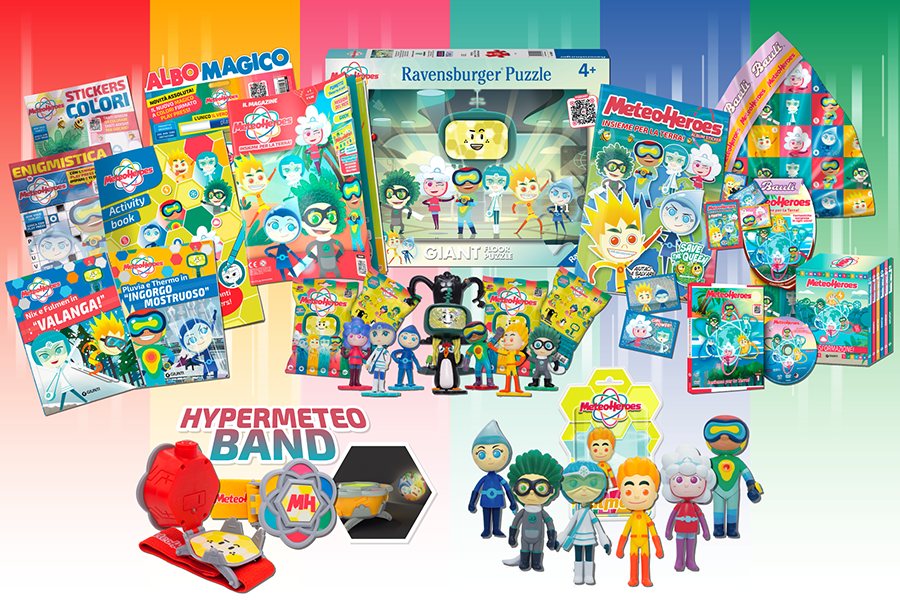 Toys and other children’s products arrive in stores, supermarkets and newsstands.

The MeteoHeroes licensing program is growing. MeteoHeroes is the only animated TV series entirely dedicated to the environment and ecology, produced by Meteo Expert-IconaClima and Mondo TV and broadcasted on Cartoonito (channel 46 on DTT) and Boomerang (channel 609 on Sky).

In April, some new products from the toy line licensed by Play Around will arrive on the market. First, the “HyperMeteo Band” will be launched in stores and large retailers. This super-gadget is inspired by the bracelet of the six cartoon superheroes, in two colors (yellow and red), with an elastic band and a projector with 22 images from the TV series to relive the most exciting adventures.

Then, the “Action Figures” will be available on the market, six beautiful 10 cm tall fully articulated models of the “MeteoHeroes” to play with the superheroes. On newsstands you will be able to find the “3D Characters” in a flow pack, produced by Dynit: these are nine different models of a maximum height of 7 cm dedicated to the same number of characters from the series (the six superheroes, plus Tempus, Peeguu and Dr. Makina). They change their color with water, glow in the dark, and are also holographic.

These products follow the other releases in the “MeteoHeroes” licensing program. They include the official magazine with gadget published by Mondadori (the second issue will come out in April and will be dedicated to World Earth Day), the collection of stickers produced by Idea Lab (in collaboration with Legambiente in support of the “Save the Queen” campaign to safeguard bees) DVDs by Koch Media, the Easter egg by Bauli, the activity packs by Play Press, puzzles and memory games by Ravensburger. Finally, the books by Giunti Editore with “Trasformazione MeteoHeroes”, the new boxed set of 6 monographic volumes, to be released on March 31st.

Upcoming launches include stockings for the Epiphany by Emmeci, Carnival and Halloween costumes by Ciao, and educational games by Clementoni that will be part of the new “Play for Future” range and will be developed with 100% eco-sustainable products.

“MeteoHeroes continues to represent a great opportunity for companies, now increasingly committed to sustainability and environmental preservation,” said Valentina La Macchia, head of Mondo TV Licensing. “We can be extremely satisfied with the partnerships we’ve established to date and the quality of the products we’ve made, thanks to the expertise of our partners and their enthusiasm for the project.

We have successfully consolidated our brand and in the upcoming months, we aim to expand the licensing program to many other product categories in Italy. Globally, we are about to launch our brand in over 140 countries to replicate the success of our domestic market thanks to a network of leading agencies with which we collaborate“.

The TV success of “MeteoHeroes” is still going strong: last autumn the cartoon was the top show on Cartoonito for the audience of children between 4 and 7 years old, as well as ranking among the top favorite contents of the Cartoonito App in November and December 2020.

Considering these excellent results, since March 22 the channel has included in its schedule a third daily appointment with the series at 7:40 am, in addition to the other two important slots at 2:30 pm and 7:45 pm.

Also on TV, two special initiatives are currently in progress. The first is Cartoonito’s “Watch & Win” contest (on air on the Boing and Mediaset general networks), where young viewers will be challenged to discover the “character of the day” among the protagonists of all the channel’s top shows, who will appear in overlay at random times during the program. The viewers who find Fulmen, the “MeteoHeroes” character with the power of lightning, will be able to win a box full of toys, including a “HyperMeteo Band”.

The second initiative is about the funny “Doc Box” segment dedicated to the unboxing of new products (on air on Cartoonito, Boing and Boing Plus), which involves the various “MeteoHeroes” products, in particular the magazine, the sticker collection and the toy line. In the coming days, this initiative will also be promoted on Boing App and Cartoonito App.

News also on the web: the new website www.meteoheroes.com has just been launched, with lots of content for children and parents, including the useful educational kit for schools, created in collaboration with Legambeinte and Idea Lab, and the exciting digital game “MeteoHeroes Memory Game”, which aims to train young fans to develop their memory and logical thinking.

Soon the new YouTube channel will be available with loads of original and exclusive videos made in collaboration with DNA, publisher of the famous portal CoccoleSonore.it (with 1.86 million YouTube subscribers). Great results also for the “MeteoHeroes Podcast”, which reached the 23rd position in the chart of the most listened Italian podcasts on Spotify.