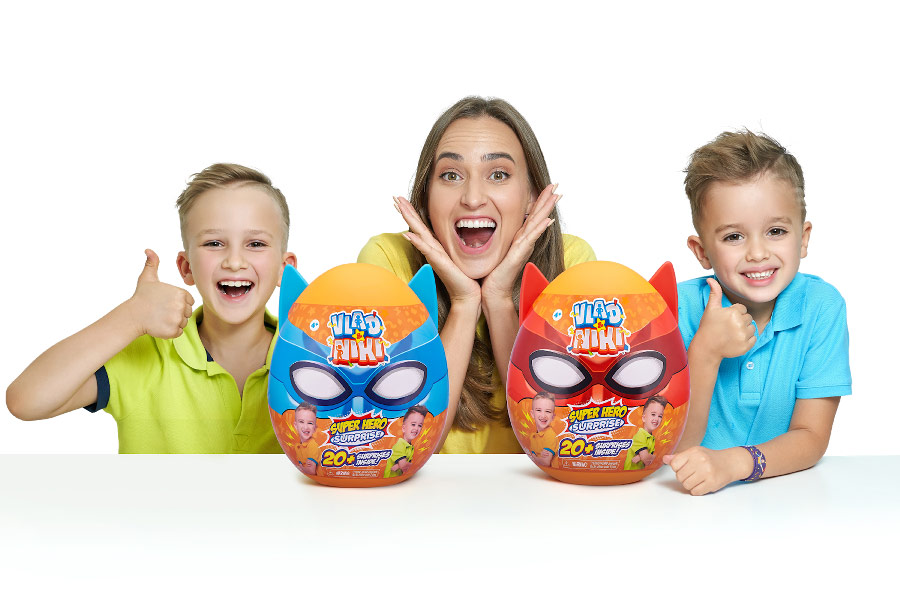 The fabulous adventures of internet sensations Vlad & Niki land in the toy aisle as ZURU™ launches a complete unboxing experience with Vlad & Niki Superhero Surprise. Among one of the largest YouTube channels in the world, Vlad & Niki is ranked the #1 Boys Show and #2 Family Show with over 56 billion views and more than 90 million subscribers across 12 languages via their 15 channels.

Capturing the joy & excitement that Vlad and Niki have brought to preschoolers, Vlad & Niki’s Superhero Surprise arrives at Target stores this June before rolling out to other mass retailers later in the summer.  Available in a Dino Attack and Robot Battle theme, an action-packed comic book adventure sets the stage for a playtime experience complete with corresponding superhero costumes, vehicles, figures and more, allowing kids to bring their own story to life.

“ZURU created a collection of toys that encompass Vlad and Niki’s sense of adventure, discovery, and imagination,” said Sergey Vashketov, father of the YouTube preschool superstars and co-founder of Content Media Group FZC, LLC. “Now kids everywhere can use their own creativity playing along with Vlad & Niki and their Superhero Surprise toy collections kits.”

“Vlad and Niki are charismatic brothers who have captivated children around the world,” said Aneisha Vieira, Global Brand Director of ZURU. “With Vlad & Niki Superhero Surprise, ZURU has combined the energy, magic and spirit from the series into an experience that preschoolers will wholeheartedly embrace.”

The energetic videos center on the boys’ daily life adventures, which are brought to life with special effects and animation, superhero narrative, toy testing, and catchy songs.  Last year, Vlad and Niki introduced Christian – the boys’ new baby brother, who is delighting in his older brother’s antics.