After its debut in January 2020, Play Around, the Toy Company born from the Pea & Promoplast group has been working on new projects ready to be launched this year and laying the foundations for a future in the name of innovation. Massimiliano Piazzolla, Managing Director of Play Around gave us some previews about the future of the new Italian toy factory. 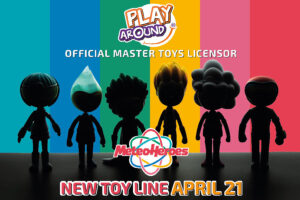 What is the evolution of Play Around from its debut in Hong Kong, January 2020, to today?

After our last meeting in October in which we traced the directions we had taken, we can confirm that 2020, despite the extraordinary nature of the situation, ended with a positive result, but above all with many expectations towards 2021. The projects underway are become reality and very soon they will be in the stores to testify our commitment in recent months.

The internal contamination between the different souls of the Pea & Promoplast Group, of which Play Around is a part, is generating a lot of new ideas and methods of approach, from which our partners and customers are already benefiting.

In 2021 you are part of the Meteoheroes project. What can you anticipate?

Mondo TV’s Meteo Heroes project is expanding both within Italy and in other countries, with exciting forecasts. In April, the Toys line will finally be available in retail. For the occasion, a TV campaign was planned to support the launch, along with many initiatives also introduced by Mondo TV.

To get all the details, I ask you to wait a few more weeks, when in the March issue of Licensing Magazine we will tell you a preview of everything that will happen around our heroes,… indeed to the Meteo Heroes!

What else is in store among your future projects?

By 2021 we will be very focused on MeteoHeroes, which by the end of the year will also find a home in other European countries. Then, there will be the presentation of a new internal project, the ScaryMon, a whole new and fun idea that will soon be revealed to the market.

The future will see us focused on a totally innovative challenge both in the approach and in the mechanics of operation. In fact, we are working on an interactive platform that is able to centralize and integrate the projects that we will create in the various distribution channels.

It is a visionary idea, which will have to overcome several steps, but which we are convinced will lead to a new perception in the methodologies of organization of Toys projects and in the adjacent channels.

← THE FUTURE OF PROMOTION, BETWEEN DIGITAL AND TOY RFID. THE NEW WAY TO ENTERTAIN CHILDREN THROUGH STORIES →