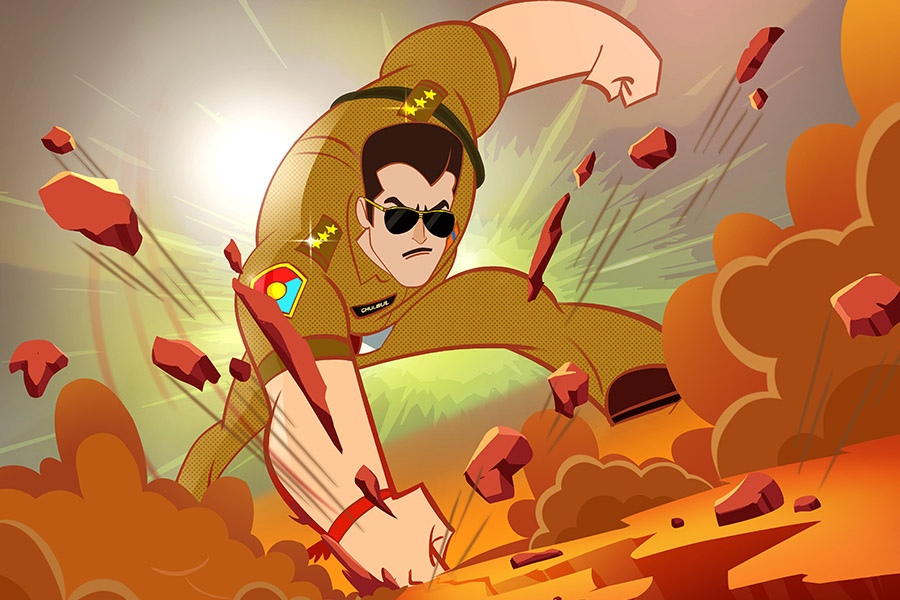 The show, produced by Cosmos-Maya, is an extension of the highly successful Bollywood film franchise and will debut on WarnerMedia’s kids TV channel Cartoon Network in India and the Indian subcontinent in mid-2021.

‘Dabangg’ (104 half-hours) is the latest WarnerMedia/Cosmos-Maya agreement, with the two companies having recently collaborated on the production of ‘Titoo – Har Jawaab Ka Sawaal Hu’ and upcoming ‘Lambu-G Tingu-G’. ‘Titoo’ has consistently been in the top-5 most viewed kids show in India since its launch on WarnerMedia’s kids’ channel POGO in July.

Targeted at a kids and family audience, ‘Dabangg’ is set to be one of the first animation adaptations of a popular Bollywood franchise where the protagonist remains an adult rather than being turned into a child character, making it instantly recognizable to the audience.

The series chronicles the day-to-day life of Police Officer Chulbul Pandey (played by Salman Khan in the films). Backed at each step by his entourage, he stands in the face of evil to keep the city safe. Fighting evil is a tough job but whatever the situation may be, Chulbul always has the time to lighten up the mood with his jokes, limericks, and one-liners. Chulbul is joined by his endearing younger brother Makkhi (played by Arbaaz Khan in the films), who is new in the police force and who keeps trying to emulate him. Rajjo will also feature as Chulbul’s best friend along with the films’ three prime antagonists Chhedi Singh, Bachcha Bhaiya and Baali, and the ‘Bhaiyaji Smile’ guy.

Commenting on the partnership, Anish Mehta, CEO Cosmos-Maya said, “Following on from our announcement for the show’s OTT rights with Disney+ Hotstar, our agreement with WarnerMedia for ‘Dabangg’ corroborates our belief in the value of showcasing the IP across multiple platforms. Getting our domestic content – especially a title as premium and promising as ‘Dabangg’ – out on network television, enables us to reach a mass audience. By creating projects and content with suitability for both digital and TV mediums, we are able to create space for larger future projects with greater budgets, and create stories that are varied, distinctive and suitable for a global audience.”

Speaking on the show, Abhishek Dutta, South Asia Network Head for Cartoon Network and POGO, said, “We are thrilled to work with Cosmos-Maya again on another highly-promising Bollywood-inspired IP. The show is one of India’s first Bollywood-inspired animations that retains the essence of the original version to appeal to the whole family. With the latest title, Cartoon Network and POGO are again betting on Bollywood – which we’ve found is a great way to provide relatable and popular content to India’s young viewers.”