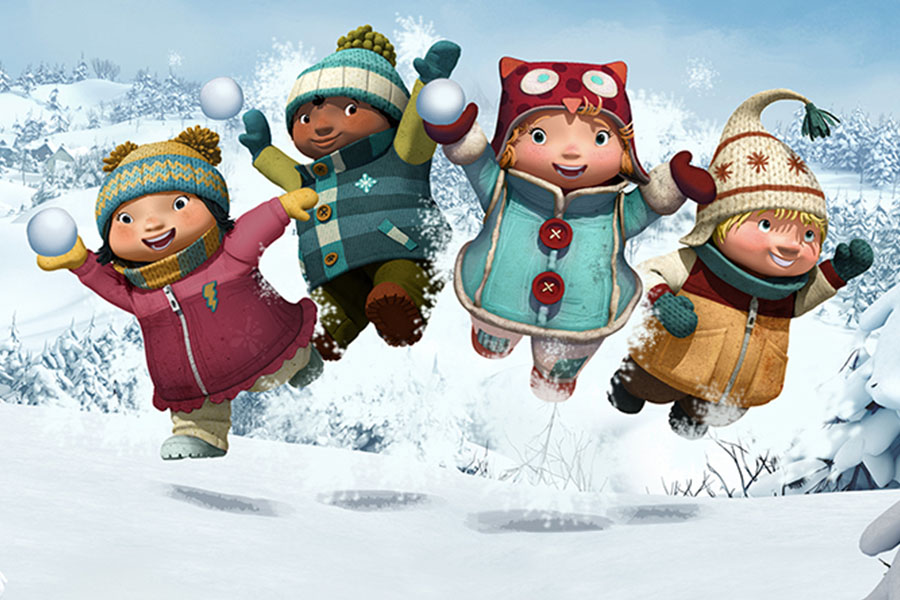 Canada/Madrid-based sales and distribution company, PINK PARROT MEDIA, has secured a broadcast deal with Europe’s leading media and entertainment company Sky for the animated comedy-adventure series Snowsnaps (26 x 11 min). The deal marks the first time the series will be broadcast to UK young audiences which premiered on Sky Kids and NOW TV on Janurary 15th bolstering Sky’s offering of stories for the whole family, ready to watch when and wherever they want, all in one place. The highly anticipated UK premiere falls on the heels of the series’ recent US launch on Disney JR. in November, a broadcast deal also secured by Pink Parrot Media.

The preschool-oriented series, a spinoff of the highly successful animated film Snowtime, features the adorable first grade best friends Violet and Tomas often joined by Sami and Kiki who love to play outside and invent wildly funny and silly games in the snow. Their made-up-as they-go games are inventive and playful with full of twists and surprises!  Snowsnaps is created by Marie-Claude Beauchamp and produced by Montreal-based Carpediem Film & TV in collaboration with animation studio Singing Frog.

“We’ve developed this series to encourage young children to use their wonderful imaginations to create their own new games while inspiring them to discover their particular make-believe outdoor worlds,” noted Marie-Claude Beauchamp. “We are so excited to have Sky as our UK partner and to have this opportunity to bring these adored characters to homes across the UK for families to enjoy and experience.  As we are all faced with staying at home, we hope that our Snowsnaps brings some joy and fun relief during these difficult times!”

The brand feature films produced by Carpediem can count on the notable contribution of great Canadian artists for its soundtracks such as Celine Dion, Simple Plan, Robby Johnson and international collaborations like Cyndi Lauper, Walk Off the Earth and many more.

The series’ promotional assets include a website (www.snowsnaps.ca) which features a string of unique Snowsnaps 360-degree virtual clips.  The clips are intended to provide new and immersive experiences that combine physical fun with digital adventures where kids can steer through their own stories sharable with their family, a timely asset during the pandemic. The series is supported by eight newly published books (Canada) of the same name which are available for worldwide licensing.