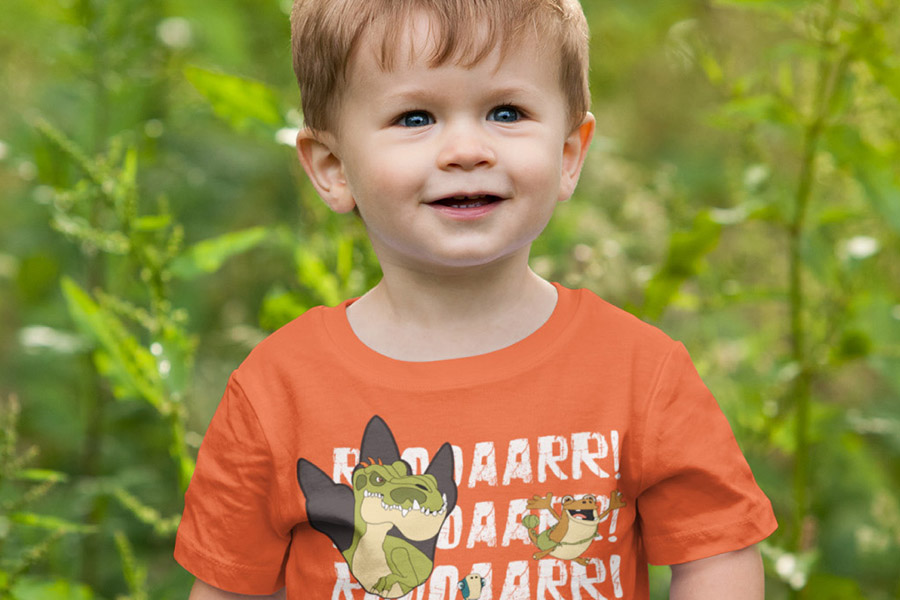 Leading apparel licensee Poetic Brands has added the award winning and children’s favourite IP to its portfolio of brands. Gigantosaurus is strengthening its presence in the UK by joining the growing Baby, Children’s Wear and Accessories division at Poetic Brands. This new partnership with bRAND-WARD Services and Cyber Group Studios’, the UK agent for Gigantosaurus IP, has been brokered by Riverside Brands.

Written by Jonny Duddle, published by Templar, and sold to 300,000 units in the UK alone, Gigantosaurus follows the adventure of the 4-Dinos friends who are trying to avoid the BIG Gigantosaurus while playing in the forest. The book features wonderfully characterised and atmospheric illustrations, combined with humorous rhyming text, to capture young imaginations and delight dinosaur lovers.

In 2018, the story was adapted into an CGI-animated TV series by Paris and Los Angeles-based producer and distributor, Cyber Group Studios. The hugely popular CGI-animated programme, currently airing its first season on Disney Junior worldwide, Tiny POP (UK) and on other major broadcasters, is also available on Netflix and Disney +. In addition, the series has just been commissioned by The Walt Disney Company and France Télévisions for seasons 2 & 3 and by Super RTL (Germany) for season 2.

Gigantosaurus has also been adapted into a video game. Developed by Cyber Group Studios and published by Outright Games, Gigantosurus the Game was launched on March 27th, 2020. In addition, Jakks Pacific Inc introduced a Gigantosaurus toy range in the US in Q4 last year and Templar will have 40 new TV tie-in books published over the next three years in the UK. Many more categories will be announced and are in discussion for launch in 2021.

Anne Bradford, Director, Poetic Brands, says: “Gigantosaurus was actually the first licence that we signed for our Baby and Children’s wear division which was a significant moment for us! Although extinct, dinosaurs will never go out of fashion, and this has already been a really fun collection to start creating and sharing at retail.

“With a huge following across boys and girls, we are looking forward to sharing the collections and providing everything for pre-schoolers from tee shirts and joggers, to puddle suits and jackets. We have also just found out that Gigantosaurus will be one of the 12 featured book titles for World Book Day 2021, so now is the perfect time to speak to us and create some amazing product for spring.”

Trudi Hayward, Co-Founder of bRAND-WARD Services Limited adds: “We are delighted to be partnering Poetic Brands, as they are a great company to work with and Cyber Group Studios has been delighted with their interpretation of Gigantosaurus on their range of clothing products, and will look forward to seeing lots of children wearing their favourite dinosaurs when the product launches early next year.”

Ash Holman from Riverside Brands comments: “Poetic Brands has a best in class retail distribution network, and we are in the midst of some very exciting joint launch plans. Fans of the show will love to wear the product that will be available on shelves early next year.”

← GERONIMO STILTON IS NOW IN LATIN TOO! CHEFCLUB CONFIRMS ITS TITLE OF RACLETTE KING! →