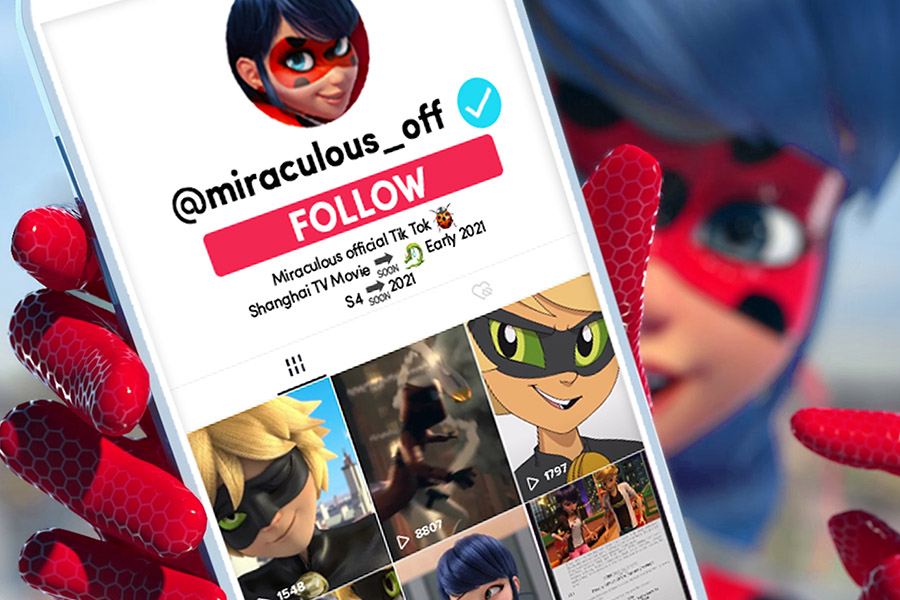 Tags from the story: MiraculousTM: Tales of Ladybug and Cat Noir, ON Kids & Family, TikTok, Zag.

Brand’s digital reach increases 178% in 2020 with an audience growth of 78%: YouTube reaches over 15 million subscribers across nine official channels with a collective 22 billion views worldwide

The award-winning independent animation studio ZAG and the first European animation studio ON kids & family (Mediawan group) continue to build an entire digital ecosystem around the world-famous series: Miraculous™: Tales of Ladybug and Cat Noir. The digital performances are at the core of the development strategy that targets the diverse fan base of the franchise.

Miraculous is newly available on TikTok, the social media platform that has grown its userbase most rapidly and significantly in 2020.  TikTok will expand the brand’s presence on Facebook, Twitter, Instagram, and Tumblr—whose 12 official accounts, which include dedicated accounts for the series’ main characters–boast five million followers in total. The new TikTok channel will unveil never before seen footage, including music videos with choreography for kids and young adults to replicate at home and record themselves performing the dances; split screen videos sharing script and storyboards with the corresponding animation; short videos from the TV series reflecting seasonal events; characters speed drawing; promotional videos/teaser trailers; ‘making of’ videos; gaming previews and special VIP invitations to discover new digital experiences by the new ZAG Games & Interactive Experiences division, and more.

During 2020, Miraculous has grown its digital reach by 178%. Miraculous attracts over 15 million subscribers across its nine official YouTube channels, currently available in eight languages.  With a total 22 billion views, fans have collectively viewed more  than 300 million hours of content.   Recently posted video clips of the series’ credits have been viewed by more than 350 million people around the world, and the exclusive 2D animated shorts based on the series “Miraculous Chibi,” which initially launched on YouTube Kids, has over 500,000 followers and over 100 million views.  The Miraculous Chibi shorts have subsequently been made available on partner channels across the world.  Additionally, the Miraculous theme song for season two, performed by Lou and Lenni-Kim from The Voice Kids France, garnered  400+ million views worldwide since its YouTube debut in November 2018, and Jeremy Zag’s “The Wall Between Us” French song, based on the series and performed by Miraculous’ duo Lou & Lenni-kim, released September 2019, achieving 40+ million views on YouTube.

“With a powerful global brand and strong fan engagement and activity, extensions in digital amplify the magnitude of the fans, and help engage new audiences,” commented Jeremy Zag, Founder & CEO, ZAG. “We continue to create new content across social media, and TikTok is going to be a great vehicle for us to share different types of content and reach out to fans across all demographics.”

“Miraculous’ main strength is the incredible alchemy surrounding an everyday life heroine. We adore Ladybug’s heroism, but we also identify with her, we feel close to her. Our digital development strategy enables us to get even closer to the audience and to adapt to new trends. Miraculous’ universe is accessible all the time, on every social network, but also in different forms, in order to offer custom-made experiences for all kinds of audiences: kids, parents… and all fans who stayed young at heart!,” adds Aton Soumache, co-founder and president of ON kids & family.

Most recently, the animated TV Movie Miraculous World: New York: United Heroez has been broadly acclaimed in the United States (Disney Channel), Brazil (Gloob), Germany (Disney Channel), United Kingdom (POP), and France (Disney Channel and TF1).  The feature is due to be broadcast in additional countries in 2021 with a launch on Disney+. ZAG and ON kids & family have also begun production on the theatrical feature, Ladybug & Cat Noir: Awakening (US$100M+ budget), which is planned for release worldwide in fall 2021 or at the beginning of 2022, alongside seasons four and five of the series, which are also currently in production.