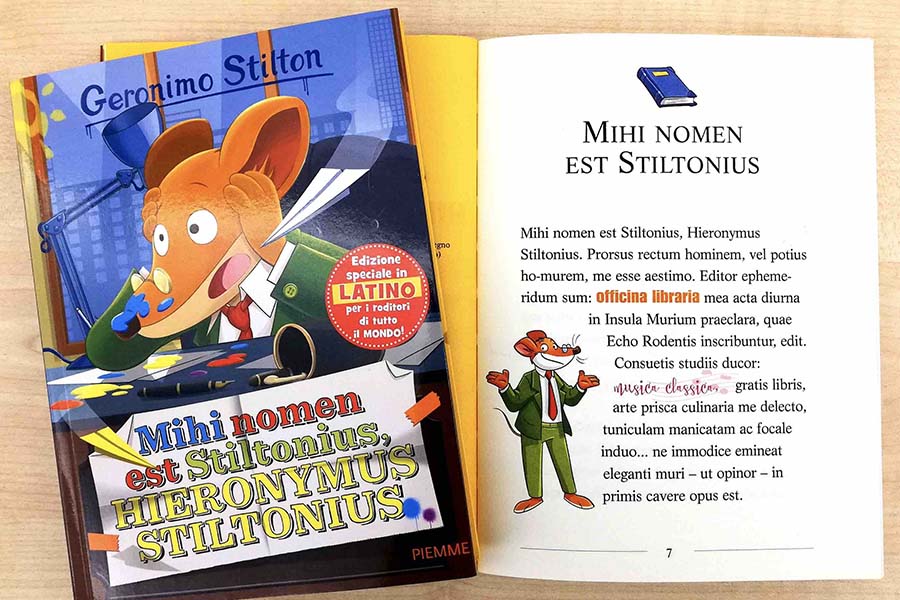 GERONIMO STILTON IS NOW IN LATIN TOO!

To celebrate 20 years of great adventures, Geronimo Stilton will add another language to the list: this time it’s Latin. The book Mihi nomen est Stiltonius, Hieronymus Stiltoniusis in fact the first story,My name is Stilton, Geronimo Stilton, and it has been translated into Latin in its entirety.

The book, which has just been published by Edizioni PIEMME, is the result of an agreement between Atlantyca and Mondadori, who have licensed the rights to publish the Latin translation in Italy, San Marino, Vatican City and Canton Ticino.

This edition ofMihi nomen est Stiltonius, Hieronymus Stiltoniusisn’t just for children, it’s also for all those adults who love to try their hand at our ancient but universal language of origin, a language that can still tell a funny, modern adventure story.

The addition of the Latin translation, means that to date Geronimo Stilton has been translated worldwide into50 languages: from English to Chinese, Spanish to Arabic and much more In the course of its twenty-year history,113 publishershave released the books about the Editor of the Rodent’s Gazzette.

Created from an idea by Elisabetta Dami,Geronimo Stiltonis the character whose international publishing rights as well as worldwide animation and licensing rights, are managed by Atlantyca Entertainment. The Geronimo Stilton book series, published in Italy by Edizioni PIEMME, has become a global phenomenon with 170 million books sold worldwide and 3 animated series co-produced with Rai Fiction and distributed to over 130 countries.