Donovan Mitchell and BODYARMOR have teamed up for a new, exclusive collaboration with adidas, creating a limited-edition version of Donovan’s D.O.N. Issue # 2 sneaker 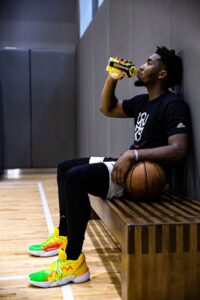 Coming off his 5-year contract extension with the Jazz, NBA All-Star Donovan Mitchell and BODYARMOR Sports Drink have teamed up for a new, exclusive collaboration with adidas, creating a limited-edition version of Donovan’s D.O.N. Issue # 2 sneaker: the adidas D.O.N. Issue #2 x BODYARMOR.

The adidas D.O.N. Issue #2 x BODYARMOR features a colorway inspired by Donovan’s favorite BODYARMOR Sports Drink flavor, Tropical Punch. The silhouette represents Donovan Mitchell’s ‘Determination Over Negativity’ mindset as he continues to aim to be a vehicle for positive disruption on the court and in communities across the country. As part of the second version of Donovan’s signature footwear line with adidas, the D.O.N. Issue #2 features a returned technology of a BOUNCE midsole, which arms Donovan and users with enhanced comfort and stability. New to the model is a higher heel counter, while the higher height gives the shoe even more containment and support. The upper features a soft and breathable mesh that provides improved lateral support through a webbed lacing system.

The adidas D.O.N. Issue #2 x BODYARMOR shoes will not be available for sale, rather only 100 pairs of shoes have been created, which fans and consumers nationwide will be available to win via giveaways on BODYARMOR social platforms and more.

Donovan Mitchell has been with BODYARMOR Sports Drink since January 2018, when he was first announced as an athlete partner and investor in the brand. In addition to Donovan Mitchell, BODYARMOR’s impressive athlete roster includes James Harden, Trae Young, Megan Rapinoe, Skylar Diggins-Smith, Kemba Walker, Dustin Johnson, Naomi Osaka, Mike Trout, and more. BODYARMOR, the fastest-growing sports drink in the category, is now the #2 sports drink sold nationwide and is on track for nearly $1 billion in retail sales by the end of 2020.