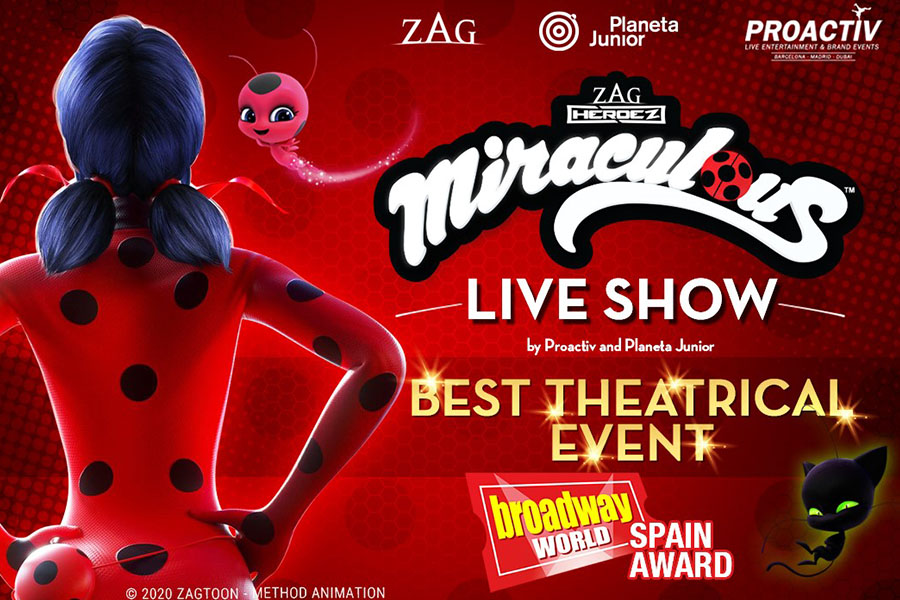 Tags from the story: Best Theatrical Event of the Year, Broadwayworld Spain 2020, Miraculous, the Ladybug Show.

The musical is based on the Miraculous phenomenon and is a Planeta Junior/Proactiv coproduction with script and music by Jeremy Zag, who produced the successful French series.

Miraculous, the Ladybug Show musical won the Broadwayworld Spain 2020 audience award for Best Theatrical Event of the Year, voted for by over 175,000 people, having won 70% of the votes in this category. Based on the series, this show is coproduced by Planeta Junior, a leading European children’s and youth entertainment company, and Proactiv, Spain’s leading family performance production company.

This theatrical event received a warm welcome at Madrid’s IFEMA Palace, where 12 shows sold 15,000 tickets last Christmas. The script and music were written by Jeremy Zag, producer of the successful French series. Miraculous the musical is now preparing for its international tour. This will launch in France in autumn 2021 and include numerous technical and story innovations to create an even more spectacular show. In France, Charlotte Hervieux (the voice of Elsa in Disney’s Frozen 2,) will sing the part of Chloe Bourgeois.

“Miraculous is a global phenomenon that enchants audiences in all formats: TV, online and now stage, and recently won audience recognition as the Best Theatrical Event of the Year,” notes Ignacio Segura, Managing Director at Planeta Junior.

“The BroadwayWorld award for Miraculous, the Ladybug Show is doubly satisfying. Firstly, because it was voted for by audiences who (with all due respect to professional critics,) always have the last word; and secondly because in the current COVID context hitting the entertainment world, such recognition encourages us to keep going with the international tour, which will launch next year. We would like to send our very special congratulations to Jeremy Zag for his script, story and music. Congratulations Jeremy!” celebrates Horacio Renna, founder and CEO of PROACTIV.

The Broadwayworld awards were designed to give musicals audiences the power to name the best of last year’s productions and professionals, in Madrid, Barcelona and on tour.