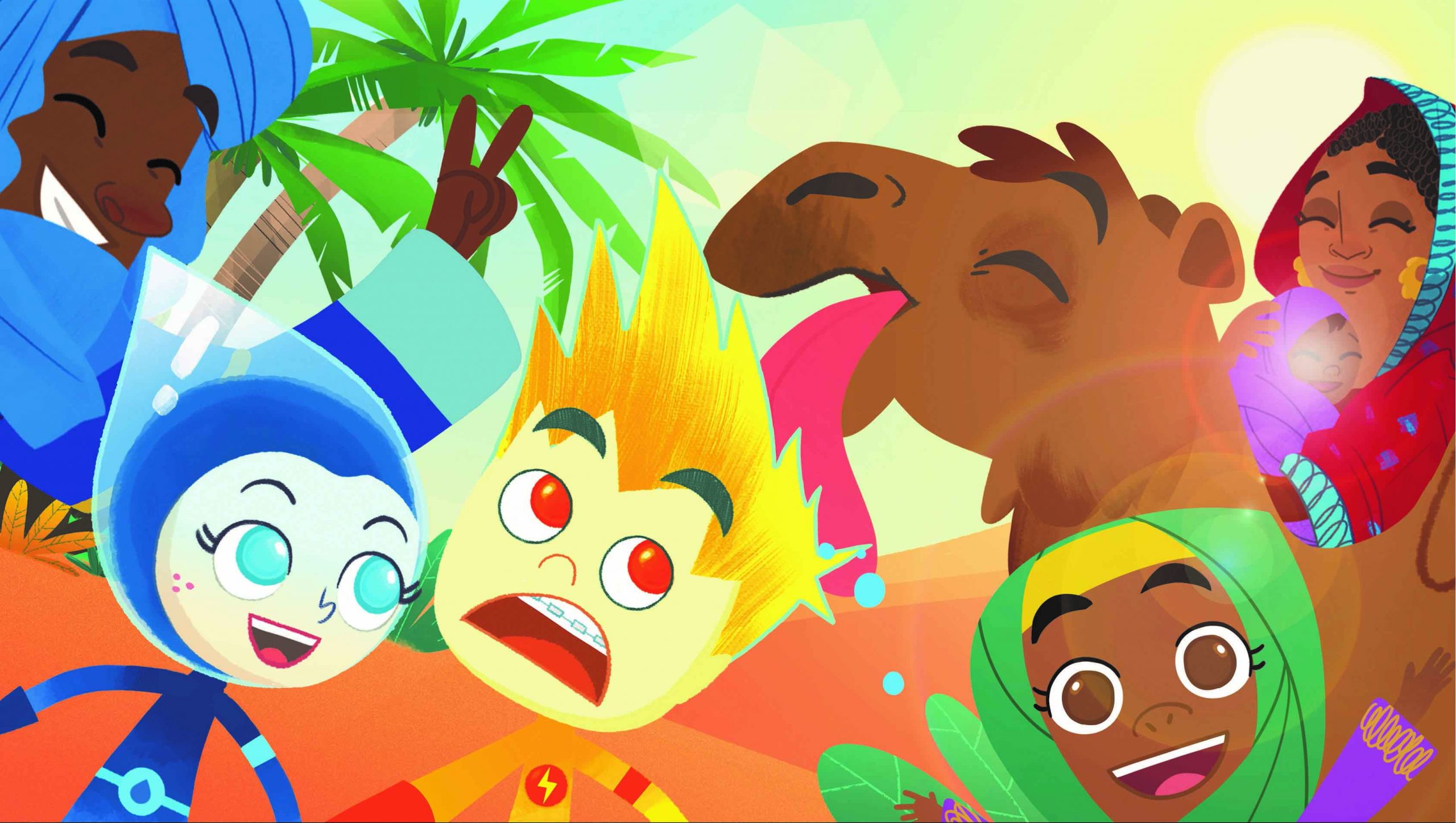 METEOHEROES: SAVING THE PLANET AND THAT’S JUST THE START!

Tags from the story: MeteoHeroes.

MeteoHeroes is a funny and thrilling new series from Mondo TV about six superpowered kids who use their powers to protect the environment. But it’s much more than that.

The four opening episodes of MeteoHeroes premiered on Cartoonito in Italy on the 22nd of April for the 50th anniversary of Earth Day. It was a perfect connection for the show, which addresses issues like fighting pollution and climate change through the adventures of six children who transform into superheroes with powers over the weather.

The show’s premiere was accompanied by a major media campaign during which the stars of MeteoHeroes played their roles as ambassadors in the fight to protect our planet. The official series launch was on the 6th of July, when the four opening episodes again appeared, followed by 14 brand-new episodes.

Cartoonito’s commitment was clear from the start – and boosted by very positive results. In fact the show was broadcast in prime time continuously for the entire summer to further build brand momentum ahead of the launch of new episodes in October.

This is a 100% Italian co-production that is now rolling out in multiple territories. MeteoHeroes is already a hit in the Italian market, and broadcast agreements with other EMEA countries and channels have already been secured, including Switzerland’s RSI, where the show launched on 5 September on the main RSI channel LA 1, and Minika in Turkey.

The July launch was promoted through a press conference, held on the 1st of July via live streaming on the MeteoHeroes Facebook account. During the event, the various players who had been committed from an early stage to making the project a reality, explained to the web audience why they supported it and why MeteoHeroes is a unique concept.

One of the earliest supporters of the show was the non-profit organization Legambiente, one of Italy’s best-known and most widely supported environmental organizations with over 115,000 members and supporters. Legambiente saw the importance and scientific validity of the project when it was still in development and gave MeteoHeroes its patronage even at this early stage.

As Giorgio Zampetti, General Manager of Legambiente says: “The primary objective of Legambiente is to raise awareness of environmental issues by making both problems and solution understandable. But MeteoHeroes goes further. It takes a valuable message into Italian homes and speaks to younger generations who will be one day be in the forefront of change. It is, in fact, unique. There are many television productions that focus on environmental issues, but none of them deals with climate change in a way that is both scientifically accurate and easy to understand for the young.”

The partnership with Legambiente extends to a framework agreement including a number of projects. One such is SAVE THE QUEEN, a campaign to protect bees that play a crucial role in supporting the biodiversity of the planet and, by extension, the existence of humanity itself. This identity of views has led to the co-branding ‘MeteoHeroes support Legambiente’. In fact Mondo TV and Meteo Expert – Icona Meteo, the show’s co-producer and a major name in weather forecasting – have started a fundraiser from the proceeds earned from the sales of licensed products.

It’s a licensing programme that also reflects the show’s message. The values of sustainability and respect for the environment aren’t just on screen; they will be reflected in the show’s carefully devised and ever-expanding licensing programme, along with the excitement, fun and great characters central to the show’s appeal.

“The show has strong potential in the context of play,” says Valentina La Macchia, Mondo TV Licensing Director, “and many assets within the series have been developed with the aim of building on that potential.” She continues: “The variety of characters and their very different personalities, as well as the richness of the locations, will all help to inspire the imaginations of the young when translated into products.”

Many other licensing negotiations are completed, including a range of Easter eggs for 2021, or ongoing for educational games.

The first products to reach shelves will be the Koch Media DVDs, whose launch in the normal trade is set for the 15th of October, followed by a launch in kiosks when the DVDs will be bundled with Donna Moderna and TV Sorrisi e Canzoni, two very popular Mondadori Group magazines.

This collaboration between two licensees is aimed at strengthening the visibility of the launch by making strong use of the kiosk channel, which will also serve Play Press. Play Press will also launch in October, as will Ravensburger.

So what is it that sets MeteoHeroes apart? What are the qualities that make it such a strong contender to become a successful franchise? Beatrice Fini, Editorial Director at Giunti Editore, summed it up for her company during the streamed press conference on the 1st of July when she said: “MeteoHeroes has all the right qualities to fit perfectly with the mission of the Giunti catalogue: it combines entertainment with education and has something to appeal to many different ages.”

It’s a summary that was also confirmed by a survey conducted by Mondo TV and co-producer Meteo Expert with the collaboration of Italian schools and involving 500 children aged 3 to 10. Perhaps the most interesting takeaway from the data was that the approval rating of 97% from the younger age group – the core target audience – was also confirmed by older age groups who gave the show 91%.

But there’s much more coming from this new Mondo TV co-creation; a podcast is planned.

This new ‘branded podcast’ is the first inspired by an animated series. Its contents will be fun and informative, with the familiar voices of the six little stars taking the show’s message beyond the TV screen and onto the new podcasting channel. Each episode ends with an educational postscript by Andrea Giuliacci, a well-known Italian meteorologist. MeteoHeroes ambassador Andrea, together with Meteo Expert meteorologists, has supplied the information on the behaviour of the weather phenomena that is used in the animated series – and that will also be used in the podcast.

“It is important to educate children about climate change” says Andrea Giuliacci, “because it means that as adults they will be more aware of the issues and more open to adopting sustainable behaviours.”

This is an ingenious tie-in, building on the show’s strong licensing appeal. Indeed, MeteoHeroes product packaging will contain a special QR code. Kids just need to frame it with their smartphone to listen to the podcast.

And there’s much more to come. As Valentina La Macchia says: “MeteoHeroes is a very rich brand, not only in broadcasting, education and licensing terms but in so many other ways.  We’ve only just begun to explore the potential of this amazing property.”

← TALENT REVERSE: A NEW TV FORMAT WITH AN ORIGINAL LICENSING PLAN CARTOONS ON THE BAY IS DIGITAL ON 2020 →