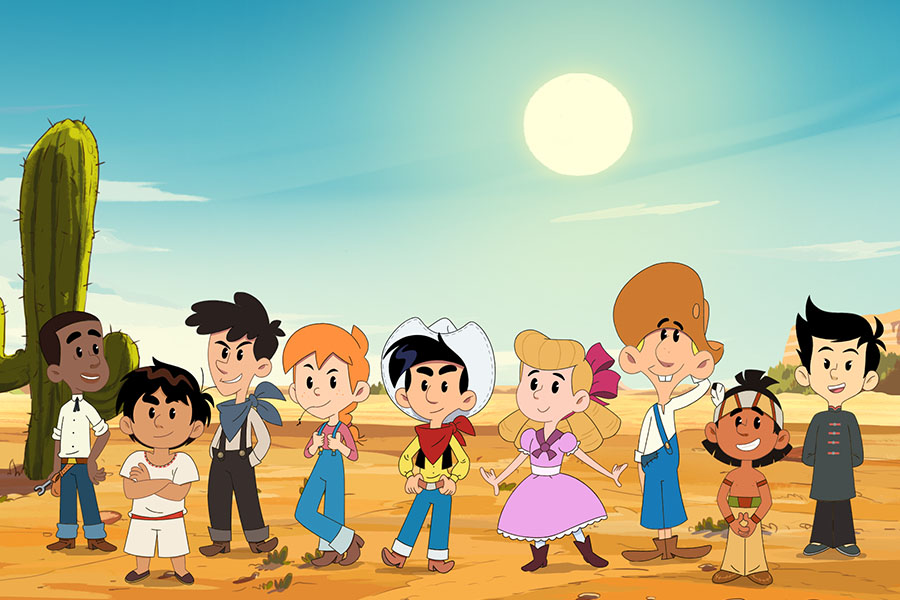 Lucky Luke, the famous cartoon cowboy born from the pencil of the Belgian cartoonist Morris, arrives on TV in a brand new animated series that for the first time tells his adventures as a child: “Kid Lucky”, produced by Dargaud Media and the Turin animation studio Enanimation, in collaboration with Rai Ragazzi, will air on Rai Gulp from Thursday, October 1, every day at 1:00 pm.

The series is set in the 1870s, when Kid Lucky has only one thing on his mind: growing up to become the greatest cowboy in the Wild West.

Each new adventure will bring Kid Lucky closer and closer to his dream of becoming a real cowboy. Together with his friends Lisette, Dopey, Joannie Molson, Little Cactus, Kid will try to tame wild horses (sometimes successfully), follow in the footsteps of grizzlies, sleep outdoors and challenge Billy Bad with his slingshot. Kid has an extraordinary aim. In addition, as his name suggests, he is an extremely lucky boy.

But life is not all fun and games, not even in the Wild West. In fact, Kid Lucky and his friends must always ask permission from their parents and meet their expectations, as all boys do.

Between housework, brushing teeth and school, it’s not easy to be a real cowboy!

The character of Lucky Luke child appeared for the first time in April 1995, on the occasion of the 50th anniversary of the protagonist, in an album entirely dedicated to the childhood of the “cowboy who shoots faster than his shadow” entitled “Kid Lucky”, in the classic series under number 33, designed by Morris.

Written and designed by Achdé from Lyon, the comic book spin-off “Les Aventures de Kid Lucky d’après Morris” was launched by Lucky Comics on November 25, 2011 and was an immediate success. Achdé, after the death of Morris in 2001, continued the western saga on the easygoing gunslinger along with other authors, including writer Daniel Pennac, in the direct line of the universe of Morris and Goscinny. The Frenchman René Goscinny, who later became the famous author with Albert Uderzo of Asterix, had in fact, since 1955, added the Belgian cartoonist to Lucky Luke’s texts. The series is transformed: Lucky Luke’s comic becomes a caricature of the western genre, and Lucky Luke will still be a silent cowboy, but he will have a talking horse, Jolly Jumper, and will never resort to violence. Later, in 1988, after Goscinny’s death in 1977, Morris will remove the cigarette from Lucky Luke’s mouth, replaced with a blade of grass, gaining official recognition from the World Health Organization, and continuing his success to the present day.

Curiosity, the character of Lucky Luke is inspired by a sheriff of Italian origin, Luciano Locarno, who lived between 1860 and 1940.

← GILIGILIS FLY AROUND THE WORLD! GO-N KEEPS TO BUILD THE SUCCESS OF SIMON →