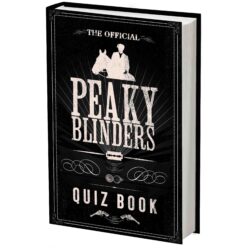 Inside the Official Peaky Blinders Quiz Book fans of the show will find over 1,000 questions from across the five series, varying in difficulty level from the criminally easy to the murderously hard, all designed to put the knowledge of even the most passionate of Peaky Blinders fans, to the test. Suitable for all ages, the quiz book will provide hours of fun for all the family.

Published by Michael O’Mara Books, the book is an ultimate call-out to fans; exploring the key themes, characters and plotlines.

Jane Smith, Group Director, Brand Licensing of Banijay Brands comments; “The new Official Peaky Blinders Quiz Book is incredibly exciting, and demonstrates yet another way of how Banijay Brands are able to work with licensees to come up with innovative ways to extend the brand into multiple product lines that consumers will love. At a time when quizzing has never been so popular, we really hope fans of the show enjoy delving deep, and testing their knowledge, as they will no doubt find out interesting facts they never knew.”

Susan Waddell, Commercial Director, Caryn Mandabach Productions, comments; “We have had so much fun working with Matt Whyman and the talented team at Hodder on the creation of the first official Peaky Blinders Quiz Book. It’s a brilliant way to relive the Show and we are sure our fans will love the chance to put their Peaky knowledge to the test”.

Peaky Blinders officially licensed product is proving a hit with consumers and retailers, as the successful licensing programme now spans over 40 licensees across multiple territories. This includes product ranges across apparel, gifting, stationary, men’s grooming, games and puzzles, video games and experiential. The brand continues to appeal to the TV series’ dedicated fan base in a growing number of international markets.

Created and written by Steven Knight (Dirty Pretty Things, Eastern Promises and Locke), the multi-award-winning BBC One series is produced by Peaky Blinders owner, independent production company Caryn Mandabach Productions and by Banijay’s Tiger Aspect Productions.
Banijay represent a range of global ancillary rights for Peaky Blinders which is distributed by Banijay Rights across more than 183 countries and airs widely on Netflix internationally including the USA.

The season five launch on BBC One in autumn 2019 delivered its highest ratings yet.

Banijay Brands will launch at next month’s Festival of Licensing with senior executives available for meetings at the virtual conference.