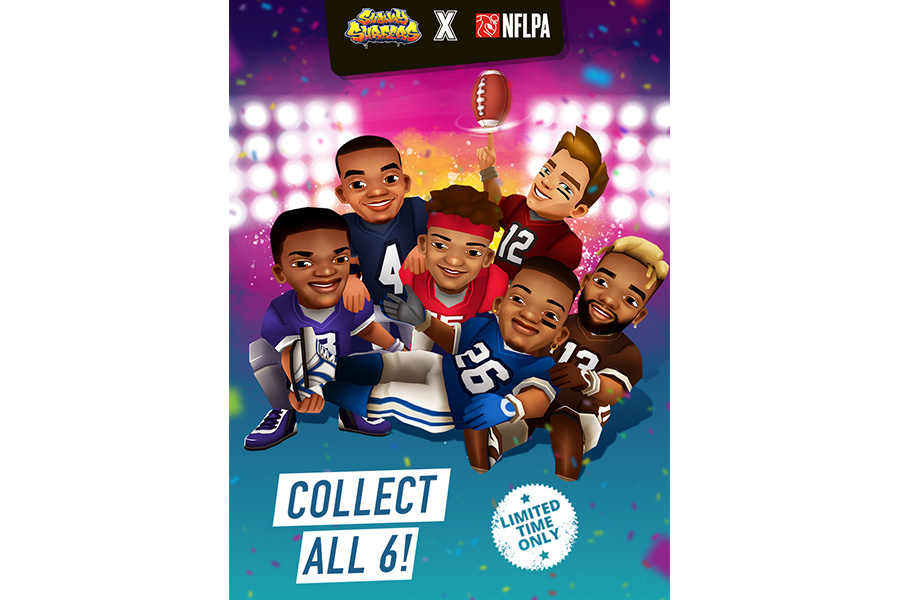 For the first time, NFL players will appear as playable characters in Subway Surfers through a new group licensing partnership, it was announced by SYBO Games, the NFL Players Association (NFLPA) and OneTeam Partners (OneTeam). The endless runner mobile game crossed three billion downloads worldwide in August and was the No.1 most downloaded mobile game in the U.S. on the App store for both games and apps this past July. OneTeam, the NFLPA’s group licensing representative in the video game category, facilitated the deal.

For three weeks, beginning September 10th, Subway Surfers gamers can unlock and play as some of the world’s most famous runners. Six NFL players along with their names, numbers, images, and likenesses will be unlockable and playable as Subway Surfers in an American football-themed game event.

In addition, in-game hoverboards based on the six NFL player characters will be unlockable prizes.

“The partnership with the NFLPA and OneTeam marks yet another amazing milestone for us,” said Naz Amarchi-Cuevas, SYBO Games’ Chief Commercial Officer. “Coming just after we crossed three billion downloads, this collaboration is yet another first for Subway Surfers. The integration of the NFL stars, combined with our premium gaming experience and overall digital content will galvanize gaming and sports fans alike.“

“The endless runner’s storyline, the game’s monthly visit to different cities and its all-around hip and diverse attributes, make Subway Surfers such a natural playing field for the NFLPA,” said Steve Scebelo, Interim President, NFL Players Inc., the marketing and licensing arm of the NFLPA. “We’re excited to offer both mobile gamers and football fans alike a truly one-of-a-kind experience by personifying NFL players in the world’s most downloaded endless runner game.”

“A unique collaboration between two popular global brands, and as we bolster the NFLPA roster of video gaming licensees, the value of bringing players into mainstream mobile games like Subway Surfers is an exciting enhancement of the fan experience,” said Henry Lowenfels, Chief Product Officer, OneTeam Partners.

In August, Subway Surfers crossed three billion downloads globally and is currently leading the download charts in the United States as the most downloaded free game AND free app on iOs, per industry analyst Sensor Tower. It was named the most downloaded game of the decade in late 2019 by App Annie.

Originally conceived as an animation property in 2009, creators Sylvester Rishøj Jensen and Bodie Jahn-Mulliner won first prize for best animation movie about a cool character that hangs out at an old subway station, avoiding a grumpy inspector and his dog. Their short film gave birth to Subway Surfers, the mobile game in 2012.