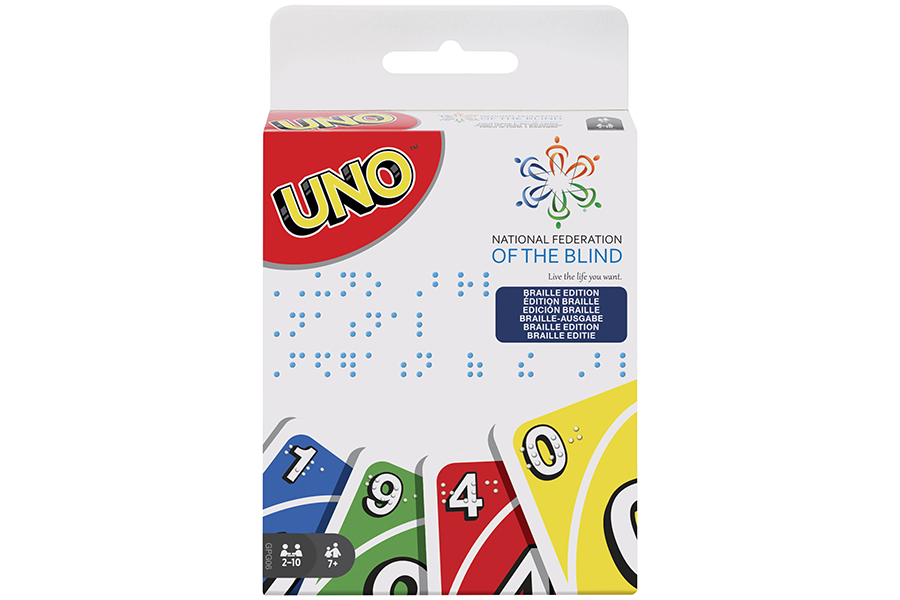 Tags from the story: Mattel, National Federation of the Blind, UNO Braille.

Made in partnership with the National Federation of the Blind, UNO Braille allows sighted and blind people to play together, making the game more accessible. For Italy Mattel collaborates with the Italian Union of the Blind and Visually Impaired (UICI)

MATTEL, the company that created UNO®, the number 1 card game in the world*, has announced the debut of UNO Braille, the first official deck of cards made with the Braille code. The new version will make the game more accessible to millions of blind and visually impaired people around the world.

Made in partnership with the National Federation of the Blind, the oldest and largest blind organization in the United States, UNO Braille features the Braille reading system on the corner of each playing card to indicate color, number or function of the card.

“With the launch of UNO Braille, we’re really making a difference for a community that so far hasn’t been equipped with a game that both blind and visually impaired can play together,” said Ray Adler, Global Head of Games at Mattel. “We’re proud to have ONE Braille on our shelves and make ONE more accessible and more inclusive for many more families.”

The UNO Braille pack features the braille reading system on the front and back for clear identification and directs players to UNOBraille.com where they can find game instructions with BRF (Braille readable files) available for download. Players can also access the voice instructions through Amazon Alexa and Google Home.

“ONE Braille is doing much more than making this beloved game more accessible. It is also helping to promote the importance and normality of the Braille system by putting it in places where people don’t expect it, and integrating it into the playtime of blind children,” said Mark Riccobono, president of the National Federation of the Blind. “The fact that a blind person can now play a classic game like ONE just out of the box with both blind and sighted family or friends is a truly meaningful moment for our community. I look forward to sharing ONE Braille with my family and I know that blind people across the nation will welcome this important and exciting step towards greater inclusion and accessibility.”

Andrea Ziella, Head of Marketing & Digital of Mattel Italia commented on the partnership “I am particularly proud to announce the launch of UNO Braille in Italy also thanks to the partnership with UICI. So much has been done by Mattel in the recent past with regard to diversity and inclusion in different areas and with different brands. The word “inclusion” indicates, literally, the act of including an element within a group or ensemble and with UNO Braille we take another important step forward to witness this commitment by making the experience of playing with UNO both blind and able-bodied together“.

“The Italian Union of the Blind and Visually Impaired has welcomed with joy this important project that after the United States also arrives in Italy, allowing the blind and visually impaired to share with friends and family the beloved card game UNO, able to entertain children and adults. The recreational-recreational field is fundamental for the achievement of the full realization of people with visual disabilities – commented the President of the Italian Union of the Blind and Visually Impaired Mario Barbuto – Also for these reasons, we have chosen to sign a real partnership agreement with Mattel, which mainly involved the UICI in checking the correctness of the Braille transcription of the initials on the cards and the translation into Italian of the legend. We have also made available to Mattel and UNO enthusiasts our entire network on the territory, consisting of about 150 structures among territorial sections, regional offices and other centers where the new maps will be available in preview. We are therefore particularly pleased to collaborate with Mattel, which we hope to have again at our side also for other initiatives that can look upwards from below, because it is with partners of this seriousness and foresight that social inclusion in Italy can make great strides forward”.

This is not the first time that UNO has re-imagined its traditional game to expand inclusiveness. In 2017, UNO introduced Uno ColorADD – the first accessible card game for colorblind people.