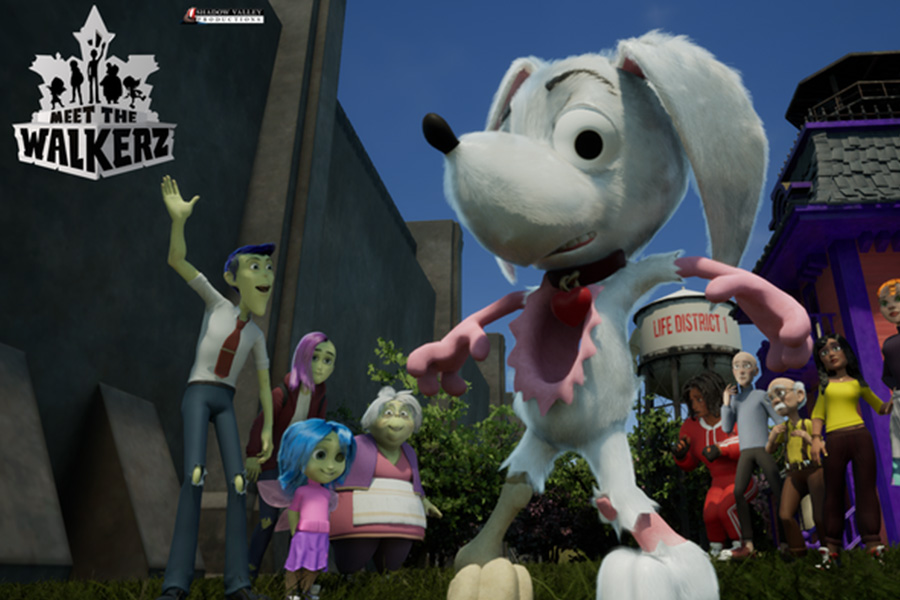 FEAR NOT THE VEGAN ZOMBIES!

Shadow Valley Productions, LLC, a creative-driven branded entertainment company, is proud to announce that September 1, 2020 introduced the delightful, but highly-unusual, vegan, Zombie family to young audiences through a newly released teaser for the new animated comedy series, “Meet The WalkerZ”.

Shadow Valley’s animated project, based on the Jonathan Sanborn comic book series The Adventures of Zombie Dog and adapted for all media by Head Writer Grant Boucher, is targeted towards children ages 6-11 years and is currently in production on an initial 4 x 22-minute miniseries to lintroduce the amazing characters and abnormal zombie life to young audiences. Shadow Valley is currently pursuing multiple licenses for the brand and most recently appointed leading licensing agency, Firefly Brand Management, as the North American licensing agent for the highly-anticipated entertainment property.

“Meet the WalkerZ” is a family friendly animated comedy series about a wonderfully-unusual vegan zombie family that wins a game show and gets a rare opportunity to be the first family of their kind to live a “life” in human society.  The Walker Family, led by noble dad Ed, features grandma Betty, son Ryder, fun-loving daughter Gigi and, of course, their outrageous trouble-making, meat-loving zombie dog named “JJ.” Based on the “The Adventures of Zombie Dog” comic books of Jonathan Sanborn, the new animated series is set to bring fun, family value-based adventures as JJ and the Walkers learn to adapt to their new neighborhood (and not so friendly neighbors) while constantly attempting to stay meat-free!

“What really drew me to produce “Meet the WalkerZ” was realizing the potential the comic book had to create a very unique and diverse line-up of characters cuddled by fun-hearted family-values all of which is hidden behind an unusual zombie (but extraordinarily friendly) life style,” noted Jeremy L. Christensen, Co-Creator and Producer. “From ‘Fear to Friendship’ is the motto.  I held onto and carried around the comic for four years knowing there was no way I was not going to make this into something remarkable and fun for all. We are so happy that it is coming to fruition and look forward to sharing this animated adventure with others.”

Shadow Valley Productions, LLC is an award-winning creative-driven branded entertainment company, an industry leader in the developing and creation of content for TV, SVOD and feature films. The company is dedicated to producing award winning visually stunning family-value driven productions that touch and entertain the hearts of all people worldwide.