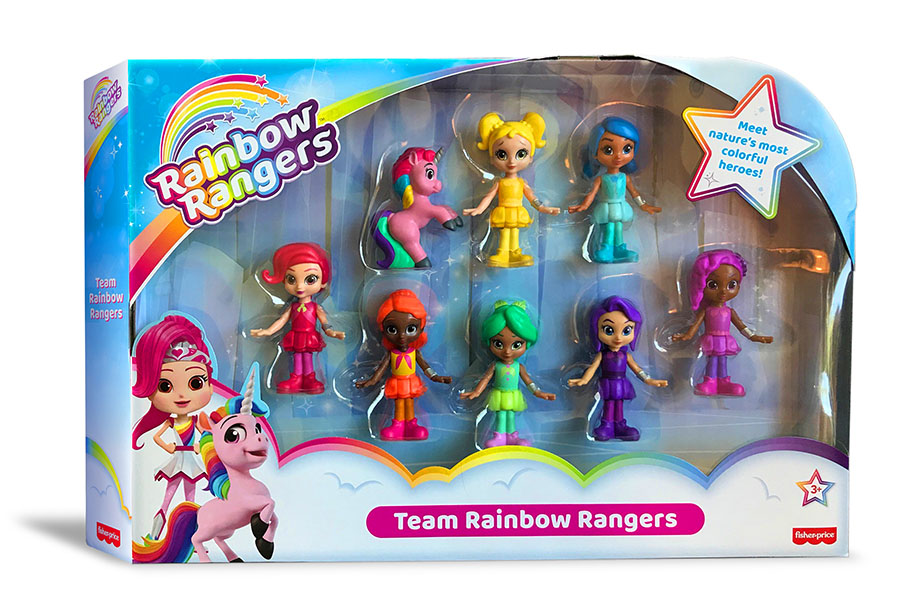 After four years of development and production,  Genius Brands International, Inc. “Genius Brands” (NASDAQ: GNUS) announced the debut of the first toys from Fisher-Price, a division of Mattel, Inc.(NASDAQ:MAT), for the hit original preschool series, Rainbow Rangers, now available at Walmart (NYSE:WMT) stores across the U.S., Walmart.com and Amazon.

“Over the weekend, we officially launched online the first Rainbow Rangers  toy figures from Mattel’s Fisher-Price into the U.S. marketplace on Walmart.com, and Amazon, and we hear from customers that the product has appeared to be sold through but keep checking back! And, we launch in Walmart stores today, marking a significant step for Genius Brands in the growth of the brand!” commented Chairman & CEO Andy Heyward. “The Rainbow Rangers brand has all of the elements to potentially become a breakout hit and a huge business for Genius Brands.  A lot of our licensing/manufacturing partners feel the same way, which is why we have hundreds of product SKUs in virtually every category coming to retail across North America over the next 12 months.”

As part of the launch initiative, Genius Brands will be issuing commemorative, limited edition, numbered and hand-signed lithographs featuring the Rainbow Rangers to the first 1,000 buyers to submit proof of in-store or online purchase.  The lithographs will be accompanied by a hand-signed certificate of authenticity and embossed foil seal to be affixed to the multipack. Genius Brands will also offer an additional 2,500 customers, at no cost, hand-signed and numbered Certificates of Authenticity and embossed seals.

Said Heyward, “I’ve been privileged to shepherd  many successful brands, such as Strawberry Shortcake, The Real Ghostbusters, and Inspector Gadget, to name a few, where the original toys have become very valuable collectible items. As a token of our appreciation for our Rainbow Rangers fans, we are thrilled to be able to offer this unique free opportunity to become a collector at launch.”

Featuring engaging storylines rooted in themes of empowerment, diversity, friendship, and sustainability, Rainbow Rangers is a rescue-based series that follows the adventures of seven girls who are Earth’s first responders, protecting people, animals, resources, and the natural beauty of our world.  The series currently airs on Nick Jr. in the U.S., with new episodes currently in production!, available in over 100 million U.S. television households and over 200 million mobile devices.  Rainbow Rangers also airs in key markets around the world, including Nickelodeon Latin America, NOGGIN in Latin America, CCTV in China, Cartoonito in Italy, TVNZ in New Zealand, Nine Network in Australia, and more.

“Rainbow Rangers is the result of the genius behind our all-star creative team, which includes by Rob Minkoff, the director of Walt Disney’s Lion King and Shane Morris the co-writer of Walt Disney’s Frozen.  The head writer of Rainbow Rangers is Elise Allen, who among other things was head writer of Disney Channel’s hit, The Lion Guard, and the Director of Rainbow Rangers is Mike Maliani, who directed Strawberry Shortcake, a brand which did $5 billion of retail sales in five years,” commented Heyward.  “We love Rainbow Rangers for two reasons:  First, it is in keeping with our ethos for Genius Brands…it is positive, enriching, non-violent programming for kids.  As the father of two girls, I felt it was important to not only show diversity, protecting the planet, and its animals, but also to show young female heroes! And, we have even more Rainbow Rangers content coming in the near future, featuring celebrity guest stars, and new themes!”